Getting a Better Grip on Gaming 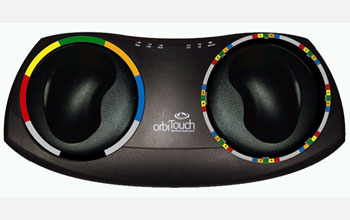 The OrbiTouch keyboard was originally created to help people with carpal tunnel syndrome.

It's hard enough to navigate an unexplored realm in an online role-playing game, but when your only means of control is the constant back and forth from keyboard to joystick, it can be hard to get into character.

Now, an approach originally designed to help people with carpal tunnel syndrome is emerging as a solution. The system lets users talk, travel and fight--all from the comfort of a single device.

Called SwitchBlade PRO, it weds the interface of a modern gaming controller with the software backbone behind the orbiTouch keyless keyboard, and its use is rapidly expanding across the gaming universe.

With an orbiTouch, you input letters, symbols or any other keystroke by manipulating two computer-mouse shaped grips forward, back, diagonally and to the sides (color-coded rings around each grip serve as the guide). Combined with a specialized switching motion, the device even replaces a mouse.

If you pull your gaming controller off of your entertainment system and plug it into your computer, you can use the SwitchBlade PRO software and an on-screen guide to get orbiTouch functionality--joystick controls wedded to easy texting.

"The idea was born when I was in grad school, typing all day and developing the beginnings of carpal tunnel syndrome," McAlindon said. "I was thinking how it wouldn't be good to graduate and not be able to type. So as an engineer, I started thinking: how can you type without using your fingers?" At the time, voice recognition technology was poor, so the remedy seemed to be, "either don't type, or have surgery," McAlindon said. "So, you just start working through it methodically. How do you type without moving your fingers or your wrist?"

Originally, he designed a device with one dome and 64 positions, but it was far too complex. Then he started thinking about joysticks.

"I thought hard about a way to develop full keyboard capability," McAlindon said. "A single joystick can be easily moved in eight directions, and using two joysticks in combination with one another would give us eight-times-eight or 64 positions for characters, and adding a shift key to either one of the joysticks would double that. That would be enough for a full character keyboard! That was a eureka moment."

With support from NSF, McAlindon perfected the technology and ultimately founded Blue Orb of Maitland, Fla., to continue its development, working with users to refine the product.

"If you don't have full use for your hands, for whatever reason, this is a technology that can help you," McAlindon said.

"We thought it worked well for people with carpal tunnel syndrome, but when we threw it out into the market, new uses emerged," he adds. "These devices are being used in shops where bulky protective gloves are necessary. People with cerebral palsy are using it. People with low vision or who are blind use a version of the device that has nubs on the dome to help guide fingers." There's even a Braille overlay and a specialized version of the color-coded overlays for people who are color blind.

The impetus for adapting the system for gaming came when McAlindon shrank his orbiTouch to a hand-held version. It looked very similar to many of the gaming controllers in use in tens of millions of households today, with the thumb joysticks taking the place of the mouse-shaped grips.

At a recent gaming night on the campus of the University of Central Florida, keyboard-savvy gamers competed head to head with opponents armed with a game controller and the SwitchBlade PRO software.

"A lot of gamers were saying it dawned on them that their fingers started turning numb with a keyboard; SwitchBlade PRO allowed them to rest their fingers since it only uses thumbs," McAlindon said. "Not necessarily a solution per se, but it can be used to help mitigate some of the effects of gaming with a keyboard and mouse for a long period of time. And it's not just a hand issue. When you're slumped over a keyboard, you can feel it in your neck. When you sit back, you're giving your whole body a break. We like to say, 'Kick Back, Kick Butt,' when playing your video games."

While PC gaming is an enormous shift for McAlindon's technology, he's never abandoned the original mission of reaching out to people with disabilities. The most recent extension of the effort is Project Blue Skies, an educational system that uses the orbiTouch to bridge the communication gap between people with autism and their families.

The two-grip orbiTouch is less distracting than a keyboard and does not require finger motion, making it ideal for children and adults with autism. For the project, the orbiTouch is matched to lesson plans, games and assessment tools.

McAlindon continues to refine both hardware and software for all of the orbiTouch and SwitchBlade PRO applications, recently teaming with the game development program at Full Sail University in Orlando to expand the effort.