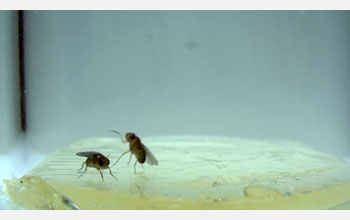 Image of lunge and wing-threat behavior between a pair of male fruit flies.

Recently, biologist David Anderson set out to learn whether flies, like bees, can get angry--part of a broader effort to study how animal behavior relates to genetics.

"Every time you swat a fly away from your hamburger, it seems to come back to the food more aggressively or persistently," Anderson said. "People might wonder about whether there's such a thing as an 'angry' fly, but no one would challenge the idea of an angry bee--especially someone who's been stung by one."

To test his hypothesis, Anderson--who currently has two projects funded by the National Science Foundation (NSF) and who is a Howard Hughes Medical Institute (HHMI) Investigator at Caltech--created an experiment modeled after the traditional "bees-at-the-picnic-table" scenario using Drosophila, the common fruit fly (or more accurately, the vinegar fly).

"We developed the 'puff-o-mat' apparatus, with the idea of putting some fly food at one end, and then blowing the flies away from the food with a gentle puff of air every time they got close to it," he said. "Then we measured whether the flies became more agitated and approached the food more aggressively after experiencing this frustrating experience several times."

As it turned out, they didn't even need the food.

"To our surprise," Anderson said, "simply blowing the flies off their feet several times in a row was sufficient to get them riled up. So we decided to focus on that--the agitation response--because it was much simpler to set up without the food, and without starving the flies. The part with the food never made it into the final paper,"  he added, referring to a study published in the journal Nature in early December, 2009.

The flies showed a primitive emotion-like behavior. Prompted by a series of brisk air puffs delivered in rapid succession, the flies ran around their test chambers in a frantic manner, and kept it up for several minutes. Even after the flies had calmed down, they remained hypersensitive to a single air puff.

The research showed that Drosophila produces a pheromone--a chemical messenger--that promotes aggression, and directly linked it to specific neurons in the fly's antenna. Anderson and his colleagues believe that the findings ultimately may be relevant to the relationship between the neurotransmitter dopamine and attention deficit hyperactivity disorder.

The brain of Drosophila contains about 20,000 neurons, and has long been considered a valuable system with which to study the genetic basis of learning, courtship, memory and circadian rhythms.

In recent years, Drosophila research has also been a powerful tool with which to study emotions. Most of the genes in the fruit fly are also in humans, including neurons that produce brain chemicals associated with several psychiatric disorders.

For example, in an earlier study, the researchers demonstrated how Drosophila hunkers down and stops moving in response to a steady wind--a sensory tool that could improve how the insects navigate during flight, and could help scientists learn more about the nervous system.

Anderson came to this field of research after amassing an impressive record studying the developmental biology of neural stem cells in mice. He decided he wanted to try something new. Switching scientific directions mid-career is always risky, it takes courage and a willingness to fail, but Anderson was game.

"The change in field happened slowly, in two stages," he said. "First, we began studying neural circuits underlying emotional behavior in mice, because that's the organism we had used for our developmental studies. It started with a focus on fear. But I'd been talking to Seymour Benzer--my colleague at Caltech and the father of Drosophila behavioral genetics--for years about whether one could study fear in flies, and he had always encouraged me to look for it."

When it became clear that the mouse studies were going to take longer than he had expected--the tools he needed were not yet well-developed--Anderson decided to turn his attention to the flies.

"In addition, I'd had this idea that you could screen large numbers of flies to find neurons involved in specific behaviors, just like people had been screening flies to find genes involved in specific behaviors, and wanted to give the approach a try," he said. "At the time, it was a relatively novel idea. Now, seven years later, everybody is doing it."

The work started in earnest around 2002, when Greg Suh, a postdoctoral fellow with a strong background in fly genetics, joined Anderson's lab. Soon after Suh's arrival, he, Anderson, and Anderson's colleague, Seymour Benzer, began working together on the study of the Drosophila nervous system. The productive collaboration continued until 2007.

"Surprisingly, it seemed relatively easy to start working on flies after having overcome the activation energy barrier to switch from development to behavior," he said. By contrast, when I was working on development, I was always thinking about switching to flies, but too intimidated by the change to take the risk. I guess when you set yourself up for a big risk--changing fields--smaller risks, like changing to a new model organism, seem less intimidating."

Anderson, 53, was born in Washington, D.C., but grew up in northern New Jersey with a father who was a physicist and a mother who had taught Spanish and Portuguese. He became interested in science as a result of spending his childhood and adolescent summers at Woods Hole, Mass., where his father had been working since the early 1950s at the Woods Hole Oceanographic Institute and where his parents had built a small house.

"In Woods Hole, they had science school for little kids, ages six to 14,'' he said. "You took classes like 'ichthyology' or 'seashore life,' and went on a lot of field trips collecting animals from the seashore and bringing them back to put them in aquaria and watch them. So that was fun."

His playmates were the children of biologists working at the Marine Biological Laboratory (MBL), another oceanographic institute, and his next-door neighbor, Philip Grant ,was a well-known developmental biologist, who encouraged Anderson's interest in science. "I consider him sort of my 'biology father,' as opposed to my 'biological father,'" Anderson said.

Once he became too old for the science school, Grant and another scientist helped Anderson get a job washing test tubes at MBL. "Even though it was scut-work, that job really made me feel like I got my foot in the door," he said. From the outside, the MBL seemed very closed and nepotistic: the only other kids who had summer jobs in the labs were the children of biologists who worked there. So for me, the son of a physicist who had nothing to do with the MBL, to get a job there was a big deal."

"In some ways, I always felt like a bit of an outsider in the Woods Hole summer community because my family wasn't an 'MBL' family," he adds. "Maybe that was one of the things that motivated me to succeed in biology. I thought, 'I'll go out and show them that I can become just as good a biologist as they are.' So I did. Here's the irony: virtually none of the kids I knew in Woods Hole whose parents were biologists went into science, or if they did, they didn't stay in science."

Anderson went on to earn his bachelor's degree in biochemical sciences from Harvard and his doctorate in cell biology from Rockefeller University, and he has been at Caltech since 1989, now happily married and the proud "surrogate" father of two cats.

He first became interested in how animals use chemical signals to communicate while an undergraduate, but was sidetracked by a course in cell biology during his freshman year, and so impressed with the professor that he asked for a lab job.

Yet, it was his postdoctoral advisor and career mentor, Richard Axel (winner of the 2004 Nobel Prize in Physiology or Medicine), who shaped his scientific approach. While a fellow in Axel's Columbia University lab nearly 30 years ago, Anderson began studying the developing nervous system and its relationship to molecular biology.

"I justified it to myself by saying that if I was interested in chemical communication between animals, I needed to learn about the receptors for the signals that they use to communicate," he said. "But it was just a contrived rationale."

The reality? Anderson was waylaid by a different type of science that he found more interesting at the time. "Somehow this keeps on happening to me," he says.