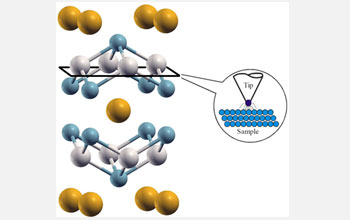 Electrons in complex matter sometimes arrange themselves into strange patterns, which remain shrouded in mystery. Finding the organizing principles and classifying their phases is an important challenge in understanding condensed matter.

One such material is URu2Si2. "URu2Si2 is a man-made compound based on uranium, which undergoes an unknown phase transition," said Kristjan Haule of the Center for Materials Theory at Rutgers University. "Its constituents display collective behavior that leads to completely new phenomena."

Indeed, URu2Si2 undergoes a definite phase transition at a very cold temperature of 17 K that is nearly impossible to miss. This mysterious ordering pattern has resisted more than twenty years of intensive experimental investigations with the full battery of tools used in experimental condensed matter physics. It is called the "hidden order" for lack of a better name.

Now, Haule and colleague Gabriel Kotliar have developed a new theoretical approach that sheds light on URu2Si2 and its puzzling physical properties, suggesting the origin of the hidden order transition. Their research was published as a Nature Physics letter, and was funded by an award from the National Science Foundation.

"Thanks to modern imaging tools, physicists usually can describe exactly what happens to a material going through a phase transition," Haule said. For example, when liquid water freezes to solid ice, the water molecules organize into a crystal. But in the case of the mysterious hidden order, physicists can detect that a transition has occurred, but can't "see" what actually changed.

"Below a temperature of about 17 degrees Kelvin, something very unusual happens to URu2Si2," Haule said. "Measured properties, such as specific heat and electrical resistivity, clearly show a phase transition into an ordered state, but there is no smoking gun indicating a definite order parameter."

For all other phase transitions, Haule said, scientists can identify the order parameter--the new physical quality that appears once the critical temperature is reached. "In magnetic systems that parameter is magnetization; in the liquid-to-solid transition, it is the lattice order; and in superconductors it is Cooper pairing," he said.

Haule and Kotliar chose this "hidden-order problem" of URu2Si2 as ideal testing grounds for their new theoretical and computational method.

In physics, symmetry means that a material looks and behaves the same way from any two points inside the system. But when a phase transition occurs, some form of symmetry is always "broken," leaving the material in a non-symmetrical state.

For example, in a liquid, atoms and molecules are jumbled together, so that the view from any point inside the liquid looks the same no matter in which direction you look. But when the liquid solidifies, its molecules are locked into place as a crystal lattice, breaking the translational and rotational symmetry.

"People have tried for the last twenty years to find what type of symmetry is broken in URu2Si2," said Haule. "This has not been possible to detect with currently available experimental techniques, and it cannot be one of the known, well-understood phenomena."

The physics of complex matter based on actinide ions like as URu2Si2, is closely tied to the Kondo effect, named after Japanese physicist Jun Kondo, who first described it in 1964. According to the Kondo effect, the charges and currents, called magnetic moments, of very slow electrons are screened off by more energetic electrons. In the process of this screening, both types of electrons actually clump together to form a composite object, or quasiparticle, which is very heavy.

"Effectively these quasiparticles look like they are a hundred or even a thousand times heavier then the electrons themselves." said Haule.

But when Haule and Kotliar applied their new microscopic methodology to URu2Si2, they discovered something unusual. When the temperature became small enough, the magnetic moment did start to disappear as a result of the Kondo effect. But as the temperature dropped even lower, the Kondo effect began losing its strength until it was no longer energetically favorable.

"The second ordered state has very similar properties to the antiferromagnetic state, with one important difference: the magnetic moments vanish abruptly, and the slow electrons reorganize themselves away from the quasiparticles to display a so-called "hexadecapole moment," Haule said.

"Hence it is natural to associate the hexadecopolar order in the simulation with the mysterious "hidden" order in the experiment," he said.

Understanding these subtle forms of order gives the researchers a better picture of a complex material. "Now that the order parameter for URu2Si2 is known, we understand the system in a much deeper level because we know what symmetry was broken and what order occurred," Haule said.

But the new methodology and the new understanding may also result in some practical benefits. "Broken symmetry states of matter are very useful in constructing new materials that have specific, targeted properties," Haule said. "For example, ferromagnets are very useful for everyday life, and superconductors are becoming increasingly important in technology, to name just a couple."

"While we do not know yet know how a hexadecapole order could be used in practical ways, it should be explored further to see how it could possibly be used for device applications," Kotliar added.

"What is sure is that the rapid rate of advance in computational approaches linking structure to physical properties will open new avenues for understanding complex materials," said Kotliar. "This understanding, coupled with the ability to simulate physical properties at the atomic scale with increasing resolution and precision, will greatly aid the challenging task of designing new materials with desirable properties."

As a bonus, Kotliar added, accelerating the process of discovery in a field where most advances are the result of serendipity offers a great promise for finding solutions to the problems of sustainable development and renewable energy.