Researchers examine the educational and social effects of making one laptop per child available in selected classrooms, and the impact on student outcomes 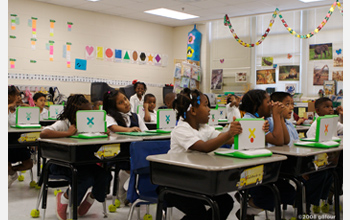 Students in Birmingham City Schools, Ala., are building their technological skills and interests while engaging in collaborative learning thanks to XO laptop computers. XO computers are rugged, low-cost, low-power laptops that have become familiar to people around the world through the One Laptop Per Child project. In Birmingham, the laptops were distributed by the local government to help reduce a "digital divide" separating Birmingham students from those in more affluent areas in terms of available technology and the opportunity to become proficient in its use.

In a study funded by the National Science Foundation (NSF) through a Small Grants for Exploratory Research (SGER) grant, Shelia Cotten, associate professor of sociology at the University of Alabama at Birmingham, and her team are examining the educational and social impact of using XO laptops in Birmingham public schools, and the effects on student outcomes.

The XO laptop is unique because the design caters to children.  According to Cotten, the design of the laptop "is more intuitive for children and how they learn. They are also sturdier, more durable, and more interactive than many other existing laptops."

These laptops use a Linux operating system and a Sugar user interface, which together allow users to identify other groups and users of XOs in geographic proximity. Cotten explained that this encourages learning and collaboration because users can collaborate and work in groups easily.

Birmingham was introduced to the XO laptops in early 2008, when the city government purchased 15,000 XO laptops for the students in Birmingham City schools. Each student in grades first through fifth received a XO laptop to keep as his or her own. Cotten explained that the goal was "to decrease the digital divide in Birmingham and to provide students with the technological skills to make them effective participants in our information and technologically driven society."

According to Cotten, the majority of the children receiving the laptops come from disadvantaged socioeconomic backgrounds. "Free and reduced price lunch rates are greater than 70 percent in the majority of the schools," said Cotten. "For [the children], there was minimal hope that their families would be able to purchase computers for them.  The giving of the XOs to these children gave them hope for a brighter future and a chance to become a cyber-participant in our society."

Both the students and their families were touched by this opportunity.  "I can tell you that the students were incredibly moved by receiving these laptops," said Cotten. "The joy was evident on their faces, and tears were flowing among many of the children.  From what I have observed, family members were excited that their children were receiving the XO laptops. This represented an opportunity for their children and their families that they most likely would not have had otherwise."

While teachers "appeared to be excited about having the opportunity for their students and themselves to become more involved in the cyber world ... I think there was also some apprehension on their part as the XOs used a different operating system than what they are accustomed to using," said Cotten.

Prior to distribution of the laptops in Birmingham, some members of the Birmingham City School System received training.  However, during the 2008-2009 academic year, there was limited money for training and more effort was spent preparing the XO laptops to be distributed to schools.  More extensive training was scheduled for this school year, since the Birmingham City Council approved giving the school system close to $1,000,000 to buy new XO laptops.

Further training can help explore the diverse XO applications and the possibilities in developing effective and creative lesson plans to motivate additional technological interest. "Many students don't become aware of programming until taking a computer science course later in their educational training and by this point it is often too late to garner their interest in learning about programming," explained Cotten. "By having them work with applications in elementary school, they may see the work they do as fun and exciting and they may not fear computer programming when they have other opportunities later in their educational career."

The range of applications includes Internet browsers, a word processing program, an instant messaging program, a program to record audio, pictures and video, a paint program, an audio mixing and editing program, a calculator, a measure/graphing frequency program, a memorizing game, an acoustic tape measure and various programming languages tailored to children.

Lesson plans could include various creative projects, explained Cotten. Examples of activities made possible through the laptops include using the Acoustic Tape Measure to measure the distance between XO laptops in math and science classes, or using the Memorize application to create memory games to help students learn vocabulary, math concepts and other subject matter.

Preliminary results of Cotten's study reveal the effects of technology use on students.  Technology in this case includes the XO laptop and additional non-XO computer use, plus other types of technologies and communication channels the students use to communicate with friends. Findings include:

Additional analysis is underway. "Over the next few months, we will begin to examine in-depth the relationships to be investigated per the NSF SGER grant," said Cotten.  "In particular, we plan to further examine the importance of teacher and school level factors, as we suspect there will be important differences across teachers and classes in the outcomes to be examined."

"As in the NSF SGER grant, we focus on fourth and fifth grades," Cotten explained. "During Year 1, we have already done in-depth observations in two pilot schools to see how teachers are using and/or not using XO laptops, interviewed school administrators at the two pilot schools regarding barriers and facilitators to integrating XOs into the curriculum in their schools. We've also begun developing lesson plans that utilize XO laptops and link to the Alabama Course of Study objectives, which Birmingham City School (BCS) teachers use."

Future plans in this study include conducting nominal group technique sessions with teachers from two pilot schools to get feedback on the lesson plans, which will be revised and utilized in a series of workshops for students and teachers from six additional schools in summer 2010. Workshops and professional development activities will also continue in Years 2-5. By completion of the project, approximately 200 teachers and 8,000 students in the Birmingham City School System will have been directly impacted.