Coming to a Home Near You: Citizen Science Contributes to Research

Discovery may be in front of your home computer, thanks to "citizen scientist" projects 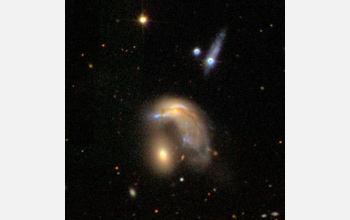 Discovery may be in front of your home computer. As technology increases the amount of new information available in various fields of science such as oceanography, astronomy and ecology, researchers are turning to citizen scientists to unlock the data.

In a study funded by the National Science Foundation's (NSF) Directorate for Education & Human Resources, researchers are studying an online suite of citizen-science projects called Zooniverse to determine the implications of public involvement in large-scale scientific activities. Zooniverse was developed by the Citizen Science Alliance with projects ranging from an effort to track solar explosions to an effort to understand how galaxies merge.

Its goal is to acquire new knowledge from growing amounts of data, spark public interest in science and ultimately bridge human observations with machine computing techniques to discover innovative ways to classify data.

"We are trying to build a partnership between machine analysis and human volunteers," said John Wallin, associate professor of computational and data sciences at George Mason University. "Both bring different strengths to the table, and we can do better science having both elements involved in our analysis."

Currently, Zooniverse has over 269,390 volunteers who have contributed to over 58,138,321 classifications using the most recent classification methods and these numbers are increasing.

Wallin explained how computer programming could benefit from citizen scientists. "Under the NSF grant, one of the big goals we will work on is using the volunteer data to help train computers to be 'better scientists,'" he said. Citizen scientists provide large sets of data, which can create algorithms to compute more accurately so that one day computers can make the same detailed observations and categorizations as humans.

"In many cases, a bigger training set for machine intelligence algorithms can lead to better results. The data generated by our volunteers is much better for this than any small data set that would be generated by a single expert."

The story of Zooniverse began with a single project in July 2007 called Galaxy Zoo. Launched by Oxford University scientist Chris Lintott and Kevin Schawinski, Galaxy Zoo was an interactive Web site designed to allow input from the public and scientists to classify galaxies. Within 24 hours, the site received 70,000 classifications per hour and about 150,000 people provided more than 50 million classifications within the project's first year.

Currently, Galaxy Zoo users have contributed to over 157 million classifications of galaxies from the Sloan Digital Sky Survey. Thanks to citizen scientist efforts, two new classes of astronomical objects have been discovered. One discovery is Hanny's Voorwerp, which is hypothesized to be a tidally disrupted galaxy that was illuminated by a quasar outburst about 100,000 years ago. The second discovery is a new galaxy classification known as "green peas," or clusters of stars, which in pictures, resemble fuzzy bright green spheres.

Galaxy Zoo is also being used to impact science education.  As students contribute to a project that functions outside of the classroom, they can see how their own observations make a difference in scientific discovery and play a role in an international effort. In addition, by engaging students in science, the researchers aim to generate interest in scientific careers.

In addition to the original Galaxy Zoo, the following are current Zooniverse projects:

Solar Storm Watch -- In this project launched in February 2010, citizen scientists help identify coronal mass ejections (CMEs), or billion-ton clouds of plasma and their magnetic field, by using images taken by STEREO spacecraft that enable stereoscopic imaging of the Sun and solar phenomena.  CMEs travel at more than 1 million miles per hour and hit the Earth's magnetic field 1 million miles creating "storms." The goal is to discover what causes these storms and how the storms vary. In addition, findings will warn astronauts if harmful solar radiation is nearby.

Understanding Cosmic Mergers -- This project was launched in November 2009 and expands upon Galaxy Zoo by examining the role of interacting galaxies, or galaxies that have a gravitational influence on one another. The goal is for citizen scientists to help study the specific parameters of a pair or larger system of interacting galaxies, so that astronomers can use these findings to estimate the amount of present dark matter. The data can ultimately shed light on other theories about the early beginnings of the universe and how it has evolved.

The Hunt for Supernova -- This project was launched in September 2009 and the goal is to identify supernovae, or exploding stars.  Most supernovae are caused when massive stars collapse at the end of their lives. Citizen scientists examine images taken about once every five days by the Palomar Transient Factory to look for changes within the images, which can help spot supernovae.

Ultimately, the community of citizen scientists offers promising outcomes for future scientific discovery and research. "They're doing the same type of analysis that we do, and their contributions make our projects possible," said Wallin.