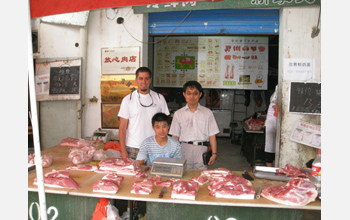 Throughout much of the last century, China's centrally planned, closed economy made the country an insignificant player in the global trading system. Today, having gone from a sleeping giant to one of the fastest growing economies, China is considered the "poster-child" for economic growth.

Many economists have called China's emergence a "positive economic shock," unleashing a consumer base and workforce of nearly 1.2 billion people into the global market.

China's transition into a market economy is driving changes in consumer preferences and demand for food. Consumers are earning higher incomes and shifting consumption away from grains and legumes towards meat and other animal proteins. Pork, the primary meat consumed in China, accounts for nearly 70 percent of animal protein in Chinese diets. This makes China the world's largest pork consumer.

Because of its economic importance, the pork sector provides an excellent outlet to study the effects of economic development on consumer preferences and demand for goods.

For my National Science Foundation (NSF) East Asia and Pacific Summer Institute (EAPSI) program project in China in the summer, I conducted a Chinese consumer demand study that analyzed consumer preferences and willingness to pay for select food safety attributes in pork.

Food safety in China has become of paramount importance in the wake of numerous food-safety scandals. As part of my research experience, I worked closely with Chinese professors and graduate students to conduct an economic assessment of consumer preferences for food-safety informational attributes.

We used a choice experiment where we simulated different pork-purchasing scenarios and consumers chose a product based on different attributes that we controlled. The informational attributes that we evaluated were: a product traceability system, a state-sponsored food safety assurance program, a third-party, food-safety assurance program, and a product-specific information label.

As I traveled to various cities to gather data for the study, I was given a unique opportunity to explore and learn about all aspects of Chinese society and local culture, from the grasslands of Inner Mongolia to the snow-covered peaks of the Himalayas in Tibet. It was in Tibet that I was fortunate to take a 24-hour train trip through the Tibetan plateau on the world's highest railway.

At these conferences, I was fortunate to meet world-renowned economists like Nobel Laureate Sir James Mirrlees, and through my interactions, I gained insight into new, cutting-edge methods in economic research. Specifically, I learned of new econometric methods that ultimately allow me to incorporate the dynamics of consumer preferences and risk perceptions into my analysis.

The results of my research quantified consumers' willingness to pay for food safety information in a transitioning economy. We found that Chinese consumers gained the most economic value from a state-sponsored food safety assurance program, and that the incorporation of a product-specific label and the implementation of a traceability system would add significant value to consumers.

Related Awards
#0912174 EAPSI: Investigating the Effects of Economic Growth on Consumer Preferences and Demand for Goods