Scientists are trying to determine why errors in eyewitness identifications occur, and how to prevent these errors 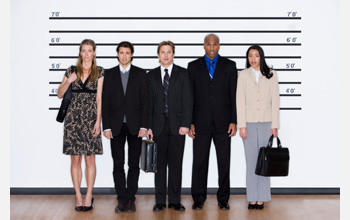 An eyewitness may select a perpetrator from a lineup even if uncertain about his or her selection.

Innocent people are sometimes convicted of crimes largely due to errors in eyewitness identifications.Scientists are trying to determine why this occurs, and how to prevent these errors. In studies funded by the National Science Foundation (NSF), Gary Wells, professor of psychology at Iowa State University, and an internationally recognized scholar in scientific psychology, has been exploring the relationship between memory and eyewitness misidentifications.

Wells has found that when presented with a lineup of potential criminals, the witness tends to select a perpetrator, even if the witness is not 100 percent sure he or she can recall what the actual perpetrator looks like.

In other words, if witnesses are not sure they recognize the perpetrator from a lineup, it is better not to select a perpetrator at all. Ultimately, the effects can be devastating to innocent people who are accused of crimes they did not commit. Wells explained that "every DNA exoneration case is exactly like that--the lineups shown to the witnesses did not contain the actual perpetrator, leading the witnesses to pick someone else instead."

Current NSF-funded research focuses on why witnesses who may not be able to immediately recall the identity of the perpetrator are still inclined to identify a perpetrator from a lineup. This immediate response is the "true recognition" "or the "'Aha!' moment of seeing the person in the lineup and realizing 'That is him!'" explained Wells.

True recognition may fail for many reasons. According to Wells, this may "include poor acquisition of a memory (e.g. from a poor view at the time of witnessing), problems during the storage phase of memory (e.g. forgetting from the passage of time) or problems at a retrieval test (e.g., the perpetrator is not in the lineup)."

Current experiments are "forcing" recognition to fail using different manipulations at acquisition, or the storage or retrieval memory phases.

"We are doing this so that we can study the psychological processes that witnesses go through that lead them to go ahead and identify someone (rather than making no identification) even though recognition failed," said Wells.

A variety of techniques are used to study these processes, such as having the witnesses "think aloud" while completing tasks.

Although it is still early in the data collection, the trend so far is that witnesses who experience a failure of recognition, often initiate secondary processes. Wells explained that these processes "tend to be based on deductions (e.g. 'if it is not number 1,2,4,5 or 6, it must be 3'), unwarranted inferences (e.g. 'I don't think that they would put the suspect in the first position, last position, or in the middle, so I think it is two or five') or very partial information (e.g. 'I remember the nose being more like the one in position three')."

A second significant finding is that the type of feedback given to the witness upon choosing from the lineup affects the witnesses' level of confidence in who they selected as the supposed perpetrator. This post-identification feedback effect proves that giving "confirming feedback," for example such as the phrase "Good, you identified the suspect in the case," said Wells, leads witnesses who were actually mistaken in their identifications to recall that they had been confident in their selection all along.

However, when the mistaken witnesses were not given any feedback, they were only 50 percent certain of their selection of the supposed perpetrator. This shows how the feedback made them more confident about their selection.

This type of feedback appears to have been given in every DNA exoneration case analyzed so far, "thereby helping to explain why these mistaken eyewitnesses were highly certain (positive) at trial, why the juries believed these witnesses, and, hence, why these innocent people were convicted," explained Wells.

Wells offers various suggestions on how to limit eyewitness misidentifications as much as possible.

Composition of the lineup: In this design, the lineup must only contain one person of interest who fits the description of the perpetrator given by the witness. Everyone else in the lineup must be known-innocent "fillers," or innocent look-alikes who fit the initial eyewitness description, but are only used for the lineup. Statistically, the person of interest only has a 1/N chance (N=number of lineup members) of being the lineup member that the witnesses would select. As a result, this would help "spread errors away from innocent suspects and toward known-innocent fillers," explained Wells.

Type of instruction: In pre-lineup instructions, the witness should be told that the real perpetrator might not be included in the lineup and that it is not required to choose someone if there is any uncertainty. Wells explained that this method "helps witnesses realize that the correct answer might be 'none of the above,' takes pressure off the witness and helps them understand that recognition failure should result in no identification rather than the engagement of some other process, such as an attempt to deduce the answer."

Despite the flaws in eyewitness identification, "we can't stop using eyewitnesses altogether. Eyewitnesses are sometimes the only evidence we have for catching perpetrators," said Wells, who noted that most of the time the "eyewitness has no motive to lie. The challenge is differentiating an honest memory failure versus an accurate account of what actually happened."