With NSF support, Amy Rosenzweig's group seeks to understand the cellular machinery that enable certain bacteria to leach copper out of the environment and metabolize methane 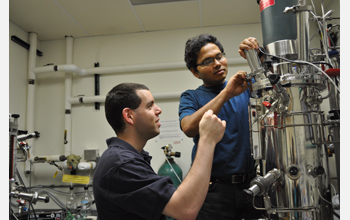 A small rectangular window on the front of the fermenter shows bubbling liquid inside. If it is clear, then that means it is only solution. If it is foggy, then bacteria have been added. Today, the liquid looks milky grey. It fizzes and froths as the correct amounts of air and methane are added, growing and feeding the bacteria inside.

This solution is more than just bacterial soup; it could hold the answers to some of the world's most complex problems, including how to mitigate global warming and how to clean up toxic waste in the environment.

At first, that doesn't seem possible. How could a simple, one-celled organism do something that advanced technology struggles to do?

Amy Rosenzweig, a professor of biochemistry, molecular biology, cell biology and chemistry at Northwestern University, explains that this type of bacteria uses copper from the environment to metabolize methane, turning it into methanol for food.

Not only does this mean the bacteria leach heavy metals from the soil, but they also consume a potent greenhouse gas--solving two environmental issues in one molecular gulp.

"The process is very basic science," said Rosenzweig, whose work is funded by a National Science Foundation (NSF) grant from the American Reinvestment and Recovery Act (ARRA) (MCB-0842366). "But it has potential for a lot of real-life applications."

Some people suggest venting methane emissions through filters of these bacteria to scrub the methane out of the atmosphere. Others suggest feeding leftover methane from natural gas reserves to the bacteria so they can convert the gas into methanol--instead of exercising the typical solution of burning it. Then, the methanol could be stored and later used for fuel. The bacteria could also be used to dispose of copper and other heavy metals where levels are unnaturally high, preventing illness in humans.

But, before these real-world applications are explored, it's important to understand the physiological processes of how the bacterial cells work.

"There are always problems with stability," explained Rama Balasubramanian, a postdoctoral fellow in Rosenzweig's lab. "Any biological molecule is going to die over time. If we understand how it works, then we can design something more stable that will last for years."

For Rosenzweig's group, this involves better understanding how these bacteria are able to acquire copper from environmental mineral resources. Previous work suggests that the bacteria secrete a molecule called methanobactin, which binds tightly to copper ions to deliver them back to the cell.

"Something outside the cell would have to recognize the molecule, grab it, and push it back inside," she said. "We're trying to discover what cellular machinery makes this happen."

The process is explored by closely watching the bacteria in action. Members of Rosenzweig's lab spend their days growing bacteria in a 15-liter fermenter that's calibrated with an optimal flow of air and methane. The bacteria are starved of copper to force them to secrete methanobactin into the extracellular solution.

The researchers place the medium into a centrifuge and spin it at 7,000 times the force of gravity until the cells fall to the bottom, allowing methanobactin in the solution to be isolated. After a couple of purification steps, the molecule is ready to be studied.

"We don't know if all methane-consuming bacteria make methanobactins and secrete them to get copper," Rosenzweig said. "And if they do, is the process different in different species? You could imagine that every type of bacteria might make something slightly different to help them compete for copper."

The particular strain of bacteria that Rosenzweig studies was originally isolated in the hot baths in Bath, England, so the bacteria prefer high temperatures. But she emphasizes that methane-metabolizing bacteria, known as methanotrophs, are found everywhere.

"If our experiments continue to run correctly, then we may be just a year or two away from understanding how this molecule works," he said. "It will take much longer for the applications, but knowing how the molecule enters the cell is step number one."

Related Awards
#0842366 Acquisition and Internalization of Copper by Methanotrophs