Humans Have a Lot to Learn From Bonobos, Scientists Say

Duke University Assistant Professor Brian Hare and colleagues study the behavior of bonobos, apes that are genetically close to humans 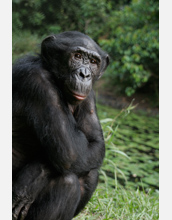 A bonobo named Mimi, the alpha female, has a little down time.

Primatologist Brian Hare wishes more people could discover what bonobos can teach us about human nature. "I really think they are the smartest ape in the world," he said. "We have a lot to learn from them."

Bonobos are genetically close to humans, yet most people know very little about them. Through his ongoing research, Hare hopes to change that.

"Bonobos really are our less familiar cousins that we have kept at arm's length," Hare said. "The general public is so unfamiliar with them that even many reporters who have interviewed me have written in their stories that they are bonobo 'monkeys,' not realizing they are apes--like us. So it is great when the bonobos can have some attention."

Bonobos are often confused with chimpanzees, but actually are quite different. In looks, bonobos are smaller, with black faces, pink lips and long black hair, neatly parted in the middle. Chimps have low, loud voices, while bonobos' voices are high-pitched.

More significantly, chimps make war, males take charge, and chimps can be quite violent, even to the extent of killing one another. Bonobos, on the other hand, are governed by females, they use sexual activity to maintain a peaceful collective temperament, and scientists have not observed any instances of bonobos killing one another.

Hare, assistant professor of evolutionary anthropology at Duke University, spends several months of the year in the Democratic Republic of Congo, where he studies bonobos. He focuses on their behavior, specifically on how they solve problems and interact with other bonobos.

Recently, he and his colleagues found that bonobos are natural sharers. The researchers' work, published in a recent Current Biology and funded by the National Science Foundation (NSF) and the European Research Council, described how bonobos enjoy sharing food with other bonobos, and never outgrow their willingness to do so--unlike chimpanzees, who become more selfish when they reach adulthood.

In one experiment, the animals in an enclosure were allowed to keep an entire food pile for themselves or open a one-way door that would allow another bonobo to enter the room to eat with them. Invariably, they opened the door.

"What we found is that the bonobos voluntarily chose to open the door for their neighbor so they could share the food," Hare said.

Another set of experiments, at the Tchimpounga Sanctuary in Congo, compared chimpanzees to bonobos. The young chimps were quite similar to young bonobos in their willingness to share food, but researchers discovered that the chimps became less willing to share as they grew older. Bonobos, on the other hand, continued to share like juveniles, even after reaching adulthood, the scientists said.

"It seems like some of these adult differences might actually derive from developmental differences," said Victoria Wobber, a Harvard graduate student who collaborates with Hare. "Evolution has been acting on the development of their cognition."

Hare and his mentor, Richard Wrangham at Harvard, believe bonobos act this way because they always have enjoyed an abundant environment. They typically live south of the Congo River, where there is plenty of food, and where they don't have to compete with gorillas--as chimpanzees must--or with each other.

However, bonobos have human enemies, specifically hunters engaged in the illegal international trade in bush meat. Conservationists are working to rescue bonobos who have been orphaned by these activities, sheltering them in sanctuaries, where they are protected for as long as they live.

"Unfortunately, bonobos are not immune to the bullets of hunters and often fall prey," Hare said. "Their meat is sold in big cities in Congo, but bush meat traders try to sell infants that survive their mothers' deaths as pets. Here in Congo, it is illegal to buy and sell bonobos, so when an infant is discovered in the market, or in the possession of a wildlife trafficker, they are confiscated."

The animals live in a sanctuary called Lola ya Bonobo, located in Les Petites Chutes de la Lukaya, just outside of Kinshasa. "Lola ya Bonobo" means "paradise for bonobos" in Lingala, the main language of Kinshasa.

Lola ya Bonobo cares for more than 60 bonobo orphans. The facility is run by a staff of conservation and welfare experts who "do an amazing job quickly rehabilitating the infant bonobos, so that they quickly recover from the trauma of their capture, and live a very normal and happy life with other bonobos here at the sanctuary," Hare said, adding: "They have a huge 75-acre forest they play in each day."

Many of these rescued bonobos serve as Hare's research subjects. At the sanctuary, Hare and his fellow researchers use experimental techniques to test the bonobos and observe their behavior. "Essentially, we design fun games that the bonobos can play and enjoy, but at the same time, (the games) can reveal how they solve problems," he said. "The study, published in Current Biology, is a great example of how experiments are important to understand the psychology of animals."

After the games, "we let the bonobos back out into their giant outdoor enclosures so they can play with all the other bonobos in the primary tropical forest they live in during the day," Hare added. "Basically, they stay inside for an hour or so, and get a lot of yummy food, and they go back outside."

Born and raised in Atlanta, Ga., Hare, 34, was always interested in animals and biology, so a career studying animal behavior, "comes kind of naturally," he said. He went to Emory University, where, among other things, he studied chimpanzees.

"However, I'd always wanted to study bonobos and compare them to chimpanzees," he said. "I did my Ph.D. work at Harvard with Richard Wrangham, who encouraged me to start working in African sanctuaries, like Lola ya Bonobo. This is exciting because our research dollars go to organizations in ape habitat countries working on welfare and conservation efforts."

Hare's wife, Vanessa Woods, is a research scientist in biological anthropology and anatomy at Duke. She has written a book about the bonobos, Congo and their research on bonobos, entitled "Bonobo Handshake," scheduled to be released in June by Gotham/Penguin. "I do think it could be a great reference if people want to learn more about bonobos," Hare said. "She detailed a lot of the story about our research--maybe too much detail in some places--a good place to look for embarrassing stories."

Lola ya Bonobo is the largest bonobo captive facility in the world that supports research, Hare said, which enables scientists "to do a number of comparisons between chimpanzees and bonobos that would otherwise be impossible."

Hare is especially pleased that one of his research colleagues, Suzy Kwetuenda, based at Lola ya Bonobo, is the first Congolese student ever to study the psychology of bonobos.

"Hopefully, she will be the first of many students studying bonobos' behavior and psychology," added Hare, "and that will get average Congolese citizens excited about saving the bonobo, which is only found in their country."