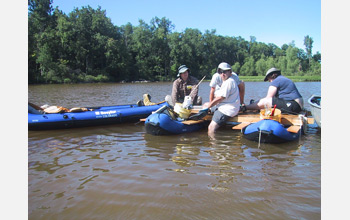 Jack Williams is a plant ecologist at heart. He likes to figure out how--and why--plant communities change over time.

"For my entire career, I've been keenly interested in the problem of 'no-analogue' plant communities, which are communities that existed in the past but are no longer found today," said Williams, a professor of geography at the University of Wisconsin at Madison, who is an expert on ancient climates and ecosystems. "They are often composed of still-alive species, but in combinations not found at present, and would look very strange to a modern ecologist."

For example, high abundances of needle-leaved trees, such as spruce and larch, and deciduous trees (those that seasonally lose their leaves, such as ash and hornbeam) have been found in fossil records in the upper Midwest dating from the end of the last ice age. But today, these trees live in very different geographic areas.

"So my question is simple: Why did these communities form in the past, and why are they no longer around today?" Williams said.

Recently, these interests took on a new dimension for him. In November, Williams and his colleagues, including graduate student Jacquelyn Gill, released research on how the extinction of ancient, large, plant-eating animals, such as mammoths and mastodons, affected ecosystems when the enormous mammals began their decline in North America about 15,000 years ago.

However, in doing so, the researchers also raised intriguing new questions about how those animals might have died in the first place.

To gather data, the researchers delved into roughly 40 feet of sediment to analyze fossil pollen, charcoal and dung-fungus spores beneath Appleman Lake in Indiana, a deep body of water left behind when the last ice age ended about 20,000 years ago.

To determine the population density of the animals, the scientists examined levels of the fungus Sporormiella, commonly found in the dung of large-plant eaters. They also measured pollen embedded in the layers of sediment to get a picture of plant growth and density, and charcoal to determine when fires occurred.

They found that the death of these creatures apparently prompted a proliferation of broadleaved trees, and ultimately, the accumulation of woody debris that contributed to a dramatic increase in wildfires. The researchers also determined that the animals' decline probably was gradual, meaning they didn't die from some sudden event.

Taken together, the evidence appeared to eliminate some popular theories about what caused their mass extinction, including the impact of a meteor or comet, a "blitzkrieg" of human hunting, or a loss of habitat due to climate changes.

"Our fieldwork at Appleman Lake was fun, but had its share of challenges," Williams said.

The research team obtained its sediment specimens through a process known as coring. The coring operation consisted of a three-person crew, two canoes and a wooden raft resting on top of the canoes.

"Our coring barrel is a meter long, so we retrieve the mud one meter at a time, pushing deeper and deeper into the lake sediments with each drive," he said. "The pushing is done by hand, and we have two-meter rods that we keep adding on as we drive deeper and deeper into the sediments. Once we reach the target depth interval, we unlock the piston that sits at the bottom of the coring barrel--which has kept sediments from filling the barrel as we push it down to the target interval--then drive the barrel down into the sediments."

At one point, as the team was pushing the coring barrel into position, "we got our depths mixed up and I realized that we had pushed a meter too deep," Williams recalled. "This meant that we had just contaminated a meter of not-yet-collected mud with our coring barrel, and that we'd either have to reposition the raft to a new location, or skip this meter and have a major gap in this particular core."

He paused. "I was so mad--we'd worked on this location all day, and we were all tired--that I ripped my hat off and threw it to the deck of the raft," he continued. "Unfortunately, the chinstrap caught my glasses and whipped them into the lake. I watched them sail away, making a soft 'plunk' as they fell into the lake. I didn't have a backup pair. We moved the raft and got a different core. And Jacquelyn drove us back to Madison."

Researchers thousands of years from now, seeking insight into 21st century humans and delving through that same lake sediment, might conclude upon finding Williams' glasses that "people of our time must have been incredibly nearsighted, even blind," Williams said.

The idea for the study arose after Williams wrote the following in a 2001 paper: "The end of the no-analogue plant associations 13,000-11,000 years [before the present] coincides with the late-Pleistocene extinction of most large mammal species in North America ... raising the possibility that one of these events, and not climate, may have controlled the growth and eventual disappearance of the no-analogue plant associations."

Williams has long believed that climate is the key factor behind plant species changes, and meant only to acknowledge that factors other than climate could be at work. But it caught Gill's attention, and she saw the potential for a great new study.

She realized that researchers could use the abundances of the dung fungus Sporormiella in lake sediments, in conjunction with fossil pollen grains from the same lake sediments, to link the extinctions to the vegetation changes, said Williams, "and off we went."

Williams, 38, grew up in San Francisco and majored in geology at Oberlin College, graduating in 1993. He earned his master's degree and doctorate at Brown University, then conducted postdoctoral research at the University of California, Santa Barbara's National Center for Ecological Analysis and Synthesis from 1999 to 2003, and the University of Minnesota's Limnological Research Center from 2003 to 2004, before moving to Madison.

"My parents were all doctors and medical researchers, so I swore I'd never be a doctor when I grew up, but I did become a scientist," he said. "I guess their conversations around the dinner table had a stronger influence on me than I realized."