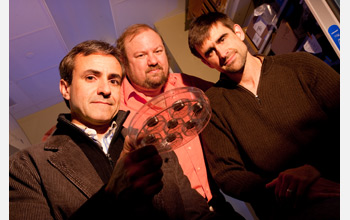 From right, Tom Killian and Robert Raphael, both of Rice, and Glauco Souza of Nano3D Biosciences.

Cells in the human body live in amazingly complex, three-dimensional environments that are crucial for the cells' proper function. The lung, for example, consists of layers of different kinds of cells that work together to exchange oxygen and carbon dioxide between the air and the blood.

The way these cells work together, and the chemicals that they express to communicate with one another, change when they live on a flat, two-dimensional surface.

Given these differences in cell behavior and expression, it's intriguing that the standard for testing new drugs and chemicals are tests that use cells grown in flat-bottomed Petri dishes.

In an effort to more accurately mimic the effect of drugs or toxic chemicals on real living tissue, scientists from Rice University and the University of Texas' M.D. Anderson Cancer Center in Houston have developed a new laboratory technique that uses magnetic levitation to grow cells in three-dimensional shapes. Compared with cell cultures grown on flat surfaces, these 3-D cell cultures form tissues that more closely resemble those inside the body. The technique has the potential to drastically reduce the cost of developing new drugs, as well as reduce the use of animals when testing the safety of manufactured chemicals. The team's results were published in March 2010 in Nature Nanotechnology.

"There's a big push right now to find ways to grow cells in 3-D because the body is 3-D, and cultures that more closely resemble native tissue are expected to provide better results for pre-clinical drug tests," said study co-author Tom Killian, associate professor of physics at Rice. "If you could improve the accuracy of early drug screenings by just 10 percent, it's estimated you could save as much as $100 million per drug."

The new technique is an example of the innovation that can result when experts come together from disparate fields. Killian uses magnetic fields to trap and manipulate atoms that have been cooled to near absolute zero. He had been working on a new project with Rice bioengineer Robert Raphael on methods to use magnetic fields to probe cellular membranes.

One day, Killian's friend, Glauco Souza, who was then studying with the center's professors, Wadih Arap and Renata Pasqualini, mentioned that he was developing a gel that could load cells with magnetic nanoparticles.

"We wondered if we might be able to use magnetic fields to levitate the treated cells off the bottom of the petri dish, allowing them to grow in 3-D," said Souza, who left M.D. Anderson in 2009 to co-found Nano3D Biosciences, a startup that subsequently licensed the technology from Rice and M.D. Anderson.

"When we tried it," Killian said, "we were shocked by how robustly the cells grew and how they displayed tissue shapes that resembled real tissue."

The 3-D technique is simple, fast, and requires no special equipment. These are big advantages compared to other technologies that have attempted to take cell culturing into the third dimension.

Souza said Nano3D Biosciences is conducting additional tests, and he is hopeful they will show magnetic levitation is as good, if not better, than longstanding techniques for growing 3-D cell cultures with scaffolds.

Nano3D Biosciences also has a grant from the National Science Foundation (NSF) to use the  technique to grow a layered model of lung tissue that can be used to test the toxicity of airborne chemicals.