Researchers at Northwestern University have developed a computer program that objectively measures player performance; the research method also could be used by companies to measure the performance of employees on project teams 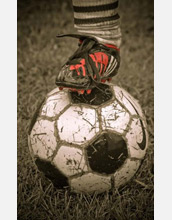 Scientists have found an objective way to measure and rank the success of soccer players.

The National Science Foundation's Science of Science & Innovation Program, in the Social, Behavioral and Economic Sciences directorate, partially funded this research. The project is the outgrowth of an effort to develop transparent, statistically sound methods to describe the productivity of researchers and institutions, and the impact of their work. The research method used here also can be used by companies that wish to measure the performance of employees working together on a team project, for example.

On a soccer field in Evanston, Ill., a passionate coach with a hint of a Portuguese accent stands on the sidelines, cheering on a team of 9-year-olds. The coach is Luís Amaral, 41, a professor at Northwestern University. One of the boys on the team is his older son, playing the sport Amaral grew up with.

"In Portugal, every kid played soccer--on the street and on the playground," said Amaral, a professor of chemical and biological engineering at the McCormick School of Engineering and Applied Science. "Wherever there was space, we played soccer, and you didn't need much space to play."

Watching professional soccer was just as important as playing and when they were children, Amaral and his friends often debated about which professional players were "the best." But, it was just a matter of opinion. Unlike baseball and basketball, there isn't a lot of statistical information detailing how each soccer player contributes to a match.

Now, as a professor who researches complex systems, Amaral and colleagues have developed a way to put some of those arguments about who is the best to rest. Through computer analysis, Amaral's team was able to measure and rank the success of soccer players based on an objective measure of performance instead of opinion. The results of the study, which was supported by the National Science Foundation (NSF), were published in PLoS ONE, a journal published by the Public Library of Science.

The study included objective rankings of players and teams from the 2008 Euro Cup. Amaral's lab is now running analysis on matches from the 2010 World Cup tournament to develop similar rankings, and fans want to see the results.

"It will include the ranking of players and teams, so you can start to look at trends of what is going on and start to make more educated guesses about which teams have better chances of winning," said Amaral, who also is a member of the Northwestern Institute on Complex Systems and an Early Career Scientist with the Howard Hughes Medical Institute.

Amaral's other research in the areas of complex systems range from understanding the structure of ecosystems and the fluctuations in stock prices to looking at physiological signals like heart rate to determine methods for diagnosing cardiac disease. He said all of his work is exciting, but there is a special place in his personal and professional life for soccer.

"The research I do never feels like work," he said. "If it feels like work, I don't want to do it. I choose topics for research with which I have fun, and this was fun. I think I'm very fortunate that I get to do what I do."