Measuring the Intersection of Two Worlds 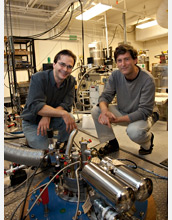 Alex Rimberg (left) and Miles Blencowe publish their findings in the journal Nature.

In a study published in the July 1 issue of the journal Nature, Dartmouth researchers describe one example of the microscopic quantum world influencing--even dominating, they say--the behavior of something in the macroscopic classical world.

"One major question in physics has to do with the connection between the microscopic and macroscopic worlds," said Alex Rimberg, associate professor of physics at Dartmouth College.

In the microscopic world, tiny sub-atomic particles such as photons and electrons, obey the sometimes bizarre laws of quantum mechanics. Meanwhile objects in the macroscopic world, generally anything visible with the naked eye, conform to the laws of classical physics discovered by Newton in the 17th century.

But a little more than 300 years after Newton, Einstein proved that light consists of tiny "packets" of energy, called quanta. This discovery marked the beginning of quantum theory, though it took decades of further work by several great scientific minds to finally settle on the modern theory of quantum mechanics.

One of the strangest laws of quantum mechanics is the Uncertainty Principle, first noted by German physicist and Nobel Laureate Werner Heisenberg in 1927. Heisenberg realized that when trying to locate a fast-moving particle, such as an electron, it was impossible to pin down both its position and its momentum at the same time.

"To do a measurement, an experiment has to interact with whatever is being measured," explained Rimberg. "But interaction means ultimately that you must exert a force on what you're measuring. If you're trying to measure the position of an object, any measurement will make the object move in an unpredictable and random way. This tendency to randomly affect what you are measuring is called "backaction."

Einstein could never accept this idea--that the act of measurement changes the object being measured--on philosophical grounds, and fought it until his dying breath. But the uncertainty principle is now known to be true for all quantum-level interactions.

What is not yet known is how the quantum and classical worlds relate. "What we don't understand, really, is how classical behavior emerges from quantum behavior as systems become larger and larger," Rimberg said. "We also don't really understand how large an influence quantum mechanics can have on the classical world we live in."

Rimberg and colleague Miles Blencowe, both supported by grants from the National Science Foundation (NSF), have now led a team of researchers in demonstrating quantum mechanical events affecting the classical world.

The scientists didn't start out to accomplish any such thing, according to Rimberg. Instead, they were trying to measure fast changes in charge at nanometer scales.

To do this, they first created tiny semiconductor crystals, similar to a computer chip, each about 3 millimeters (about 1/10 of an inch) across. They deposited gold electrical gates running over the crystal, leaving a tiny break of only about a few hundred micrometers in the middle of the chip. This break is called a "quantum point contact," or QPC.

By hooking the chip up to an electrical circuit, electrons flow through metal contacts until they hit the QPC. And that's where they started to see one of quantum mechanics' quirks.

"You can think of the QPC as a tunnel barrier, sort of a wall for electrons," Rimberg explained. "When the wall is sufficiently high, the electrons do not have enough energy to go over it. If electrons were classical objects, that would be the end of the story. But since electrons obey the laws of quantum mechanics, instead of going over the barrier they can also "quantum tunnel" through it."

Thus, when a stream of electrons in an electrical current approaches the QPC, each electron in the stream randomly "chooses" to reflect backward off the barrier or go through it.

"This random process introduces noise into the electrical current, caused by random fluctuations in the number of electrons going through at any time," said Rimberg. "Because this noise is generated quantum mechanically, it is sometimes referred to as quantum noise."

For this experiment, the scientists used semiconductor crystals made of gallium arsenide, which happen to exhibit a property called piezoelectricity. The term "piezoelectric" means that an electrical current traveling through the crystal causes a mechanical or physical movement of the crystal itself, similar to the way a sponge expands when water hits it.

Piezoelectric crystals are sometimes called resonators, because they can resonate, or vibrate, in reaction to electrical signals. These resonators can move in different ways-stretching or bending, depending on the frequency of the signal and the shape of the crystal.

"The three-dimensional vibration of a resonator crystal is exactly like the vibration you get if you strike a tuning fork, or run a wet finger about the rim of a wine glass," Rimberg explained. "The glass (or tuning fork) starts to hum with a musical note; that's because there is a particular kind of vibrational pattern, determined by its geometry, that the atoms in the wine glass collectively take part in."

In the same way, the electrons bouncing off the QPC "wall" apply a random "backaction" force to the crystal, Rimberg said. In this case, the backaction force just happened to vibrate the crystal at one of its favorite frequencies. When the researchers measured the electrical current versus frequency and found strong peaks indicating that the backaction was creating a feedback loop, it took them by surprise.

"Neither I nor anyone else anticipated the spectral features that show the samples are vibrating," Rimberg said.  "It took us quite a bit of time and effort to convince ourselves that it was a real effect, and yet more time and effort to figure out what it was."

"In our case, the current running through the QPC gives information about the position of the semiconducting crystal that the QPC lives in," Blencowe said. "But because of the quantum noise in the current, at any given time there are random fluctuations in the number of electrons (on the order of 10,000 or so) on either side of the QPC."

And because these electrons have an electrical charge, they exert a piezoelectric force on the crystal, making it move. "The remarkable thing is that only 10,000 or so electrons are able to make all 1020 (100 quintillion) atoms in the crystal move at once,"  said Blencowe.

"The difference in size between the two parts of the system is really extreme," Blencowe explained. "To give a sense of perspective, imagine that the 10,000 electrons correspond to something small but macroscopic, like a flea. To complete the analogy, the crystal would have to be the size of Mt. Everest. If we imagine the flea jumping on Mt. Everest to make it move, then the resulting vibrations would be on the order of meters!"

"Our work is a direct example of the microscopic quantum world influencing, and even dominating the behavior of something in the macroscopic classical world," Rimberg said. "The motion of the semiconducting crystal is not dominated by something classical like thermal motion, but instead by the random quantum fluctuations in the number of tunneling electrons."

And in this case, Rimberg pointed out, the macroscopic world also influences the quantum world, because the crystal's vibrations cause the electrons to tunnel in large bunches.

In future research the team could take several possible directions. "First, we will actually use the QPC for charge detection, as we had intended to all along," Rimberg said. "Second, we'll continue to look at questions regarding the quantum-classical transition, but with resonators that are smaller than these crystals--things that are in the murky borderland between the much better understood quantum and classical regimes." This borderland is sometimes known as the "mesoscopic" scale.

"The study of these kinds of systems advances fundamental knowledge and also addresses some very practical questions, including: What are the fundamental limits of measurement? And what is the most sensitive measurement device that can be made?" said Daryl Hess, a program manager in NSF's Division of Materials Research.

"Questions of this kind become more pressing as our science and technology shrink to ever smaller scales with the vision of devices, electronic and mechanical, that are perhaps only a few atoms in one or more dimensions," added Hess. "At these scales, devices could show some aspects that appear squarely in the world of quantum mechanics and others that appear to be squarely in the world of classical mechanics."

Media questions on this research can be directed to Maria Zacharias at NSF at mzachari@nsf.gov, or Sue Knapp at Dartmouth at sue.knapp@dartmouth.edu.