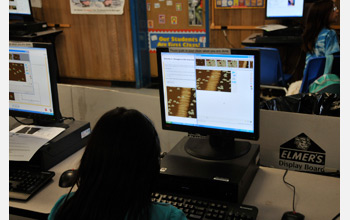 One hundred fifty-one years after Charles Darwin introduced his theory of evolution, the "E word" remains controversial in science education circles, sparking debate over how to teach it, at what age, and even, in extreme cases, whether it should be taught at all. Yet, essentially there is agreement among scientists that evolution by natural selection is the fundamental model that explains the extraordinary complexity and interdependence of the living world. Moreover, evolution by natural selection is a quintessential scientific theory, explaining an extraordinary collection of data, including much that Darwin himself was unaware of, with a small collection of powerful ideas.

Can such an all-encompassing theory be taught successfully in elementary school?

In a project called Evolution Readiness, funded by the National Science Foundation, principal investigator Paul Horwitz and a team of researchers from the Concord Consortium and Boston College, are trying to find out. They are introducing the basic concepts of evolution to fourth graders.

"Our goal is to teach young children how Darwin's model of natural selection explains the observation that organisms are adapted to their environment," said Horwitz. The project is also breaking new ground in science teaching. "Science is rarely described as an attempt to explain observations in terms of models," Horwitz said.

In other words, Horwitz sees a lack of connection between the facts that are taught to students and how they fit together to describe a broader concept, such as evolution, and he explains this dilemma metaphorically. According to Horwitz, "The term 'natural selection' appears in the elementary science curriculum as a 'noun,' a thing to be remembered and repeated back, rather than a 'verb,' a process that underlies and explains data and experiments. Evolution is a wonderful--maybe the best--example of that deeper aspect of science."

The Evolution Readiness project includes a blend of unique computer-based activities and adapted offline activities, such as experiments with "fast plants," which grow and germinate in a month. The project is in its second of three years and involves 10 teachers and approximately 200 students from school districts in Randolph, Massachusetts; San Juan, Texas; and North Kansas City, Missouri.

Co-principal investigator Laura O'Dwyer explained that the project has developed 11 learning goals or "big ideas" that underlie processes such as natural selection. Students are evaluated on their understanding of these concepts and how they function together as evolutionary processes. For instance, when asked to explain how desert plants come to be adapted to live with very little water, will the students describe a process in which individual plants "evolve" within their own lifetimes to meet the challenge? Or will they understand that such adaptations result from a much slower process in which the better adapted plants are more likely to live and produce "baby plants," even if the differences are minor? Or will they think that the plants are "designed" to adapt to their environment?

To engage students with evolution-related concepts, the project has developed a computer-based, interactive environment that enables them to perform virtual experiments. Using this tool, the students discover, for example, which plants grow best under which conditions, based on inherited traits that have evolved over many generations. The computer model also enables the students to modify the environment and observe the changes in the plants. If they make the changes slowly enough, the plant population is able to exploit minor variations from one generation to the next to evolve and adapt to the changing conditions. If the changes are too abrupt, however, they will outstrip the species' ability to adapt in this way, and the plants will go extinct.

At present, digital animals such as hawks and rabbits are being added to create new activities where they interact with the plants. This will enable the students to explore the relationships between plants and animals, and their effects on evolution.

As Horwitz explained, "Computers are an active medium that respond to students' actions. This makes them ideal for teaching about processes, and for helping students discover those processes for themselves." There is a risk, however, that children exposed to a computer simulation won't connect what they learn to real world phenomena, a possibility that prompted the team to incorporate offline activities into the project.

Fourth graders were selected as the starting point for the project because that is where the target concepts related to evolution are generally taught in the elementary science curriculum. But that is just the beginning. "Our fourth grade intervention is the first stage of an intended 'learning progression' that could in principle extend through high school biology wherein the topic of evolution is revisited again and again," said Horwitz. More advanced topics, such as Mendelian genetics and molecular biology, will be introduced in the higher grades.

While the word "evolution" is missing from many state science standards, all include a set of fundamental concepts such as the heritability of traits (offspring look like parents), variation (offspring don't look exactly like parents) and reproductive fitness (better adapted organisms live longer and have more offspring) that form the basis of evolution. Understanding the links between these concepts is by no means a simple task, but the Evolution Readiness team believes that children as young as 10 can make that conceptual leap. And the data they have collected so far bears out their optimism.

The team hopes that the project will eventually expand to reach a larger number of students. "If [the project] succeeds in teaching these very young students such a difficult topic it will demonstrate that such a thing is feasible, and in the process will demonstrate the extraordinary educational potential of manipulable computer models for teaching about processes," said Horwitz. "I hope that they [the students] will get a feel for the way science operates--and the assurance that science is fun and they can do it!"