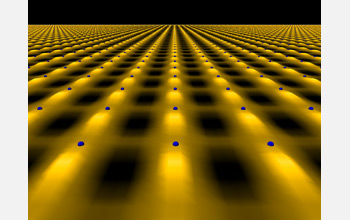 Scientists at Cornell University, along with an international team of researchers, recently discovered that electrons in a superconducting material, copper oxide, spontaneously picked a preferred direction in which to spin.

The finding could lead to the long-sought goal of conducting electricity without power loss at room temperature, paving the way for wide use in an energy-saving electrical power grid.

Superconductors are materials that lose all electrical resistance when cooled below a certain temperature. The first superconductors scientists found had to be cooled to temperature of near absolute zero (about -273 degrees Celsius or -460 degrees Fahrenheit) in order to transmit electricity without losing any power.

But the need to keep the materials so cold before they can superconduct makes it impractical to use them in long promised technologies such as ultra-fast computers, advanced modes of high-speed transportation and loss-free power grids.

In the mid-1980s, a new class of "high-temperature" superconductor materials was discovered that superconduct well above absolute zero, although still far below room temperature.

Among these materials is a group of materials called cuprates, which superconduct at temperatures as "high" as about -123 C (-190 F). The copper oxide crystal used by the scientists at Cornell is a cuprate superconductor.

Normally, the material's copper and oxygen atoms group together into symmetrical units, and scientists would expect the electrons in each unit to behave symmetrically also. This means each unit's electron spin picks a random up or down direction. But when each unit's electron spin picks the same direction, it's called broken symmetry, and it's a sign that a significant change in the material has taken place.

"Think of it like a magnet on a refrigerator door," explained Eun-Ah Kim, assistant professor of physics at Cornell. "This type of magnet works because it has electron spins all pointing in one particular direction, rather than randomly. Such spontaneous collective choice is called symmetry breaking."

In the case or the research team working with the copper oxide material, the broken symmetry showed up in images of cuprates taken by a scanning tunneling microscope operated by researchers at Brookhaven National Laboratory in New York.

Kim said the finding presents "an opportunity for a whole new stage of research. We have a map of this broken symmetry; now we can experimentally study how it affects superconductivity." The finding further points to a theoretical model that may explain the mechanism of high temperature superconductivity.

Getting to the bottom of this broken symmetry in cuprates may eventually help scientists create new materials that show superconductivity at warmer and warmer temperatures.

"Solving the mystery of how some materials can superconduct at something akin to room temperature is important," said Kim. "But there is also an element of genuine curiosity. Unlocking secrets of a collective behavior of an astronomical number of interacting electrons is like discovering a new galaxy."

To read more about it, see Cornell University's press release; also see the published report in the July 15 issue of the journal Nature.