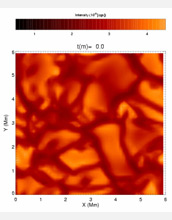 What would happen if the yardstick that astronomers used to measure the universe was too long?

This is what Carlos Allende Prieto, a researcher at the Institute of Astrophysics of the Canary Islands (IAC), and his colleagues, David Lambert of the University of Texas at Austin and Martin Asplund of the Max Planck Institute for Astrophysics, proposed in their 2001 paper, "The Forbidden Abundance of Oxygen in the Sun," stirring up controversy in the world of astronomy.

The team's investigation of the chemical abundance of the sun suggested that the amount of carbon and oxygen in our star is 30 to 40 percent lower than previously believed. Since the chemical make-up of the sun is a reference point for the composition of other objects in the universe, many models that relied on the higher abundances were also put into question by Allende Prieto's assertion. A dozen rebuttals appeared in scientific journals.

In 2009, more comprehensive simulations computed at the National Science Foundation (NSF)-supported Texas Advanced Computing Center (TACC) proved that Allende Prieto's measurements were accurate. This discovery has led to new notions about our cosmic evolution, as well as a reevaluation of the distinctiveness of the sun.

"Everything we know from objects in the universe comes from the analysis of light," said Lars Koesterke, Allende Prieto's collaborator and a research associate at TACC. "We analyze the light of stars to figure out what they're made of, what their temperature is and how much energy they emit."

Certain characteristics, like an object's color or intensity, give us clues about the source of the light. Astronomers developed a method called "spectral analysis," where they refract and analyze light to determine the amount of a given chemical species in a star or planet.

By breaking light down into optical bands signifying different chemical elements and comparing this spectrum with models of the sun, astronomers can accurately determine the solar abundance.

Or so they believed.

For decades, scientists had been using one-dimensional models of the solar surface to perform these analyses.

"In a one-dimensional model of a star, we assume that everything is static, frozen," Allende Prieto said. "In reality, everything is moving and you have this boiling at the surface. That changes the dynamics, the energy balance and the appearance of the spectrum."

Using a new three-dimensional model of the solar surface and updated atomic data, Allende Prieto obtained a spectrum that indicated significantly lower amounts of carbon and oxygen than those determined by earlier studies.

This huge change in chemical abundance alters prevailing theories about the structure and evolution of stars.  For instance, the sun's chemical composition is a primary piece of evidence used in telling the story of our galaxy's evolution: the cycle of birth and destruction that led to the creation of Earth and its heavy elements.

"If you believe that there's now less carbon and oxygen, then our view of the chemical evolution of the galaxy has to be changed," Koesterke said.

Originally, critics claimed that Allende Prieto's conclusion was based on a small fraction of the spectrum and used unproven models and codes. Allende Prieto would have liked to present more proof, but the simulations required all of the computer processing power available to produce just a few lines of the spectrum.

A full spectrum analysis, using 3-D models, required computers a million times more powerful than what was available. Which is to say: impossible.

It was at this time, in 2004, that the McDonald Observatory hired Lars Koesterke to assist with Allende Prieto's problem. Working over a period of four years, Koesterke created a tool that simulates in 3-D the light emerging from the solar atmosphere much more efficiently. Simultaneously, computers grew dramatically more powerful.

In 2008, as a consequence of this speed-up, Koesterke and Allende Prieto proved definitively that the initial assessment of chemical abundances was no fluke. The pair published a paper describing their work, and increasingly, the new abundances are being accepted and integrated into solar models. Furthermore, work done in parallel by the German group led by Martin Asplund has also independently confirmed their results.

"A good fraction of astrophysics relies on getting the chemical composition of the stars right," Allende Prieto said. "If the huge revisions to carbon and oxygen abundances we've seen with the sun are waiting for us with other stars, then there will be exciting surprises."