Green Bank Telescope's staff typically spend their days helping scientists carry out their research, but on one dramatic day in February 2010, they helped rescue soldiers from a crashed helicopter 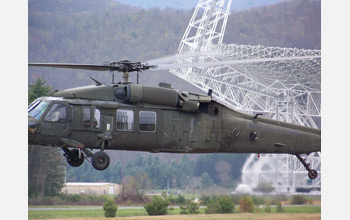 A Blackhawk helicopter lifts off in front of the Robert C. Byrd Green Bank Telescope.

The NRAO staff in Green Bank, W. Va., typically spend their days working to maximize the scientific output of the telescope through maintenance, instrument development and aiding the wide variety of scientists whose peer-reviewed scientific observations are scheduled on the telescope.

February 18, 2010, was ending like any other day at the site--the telescope was observing the motion of galaxies in the nearby universe, and the majority of employees had already left for the day.

In this serene mountain valley, it is not uncommon to hear the roar of military jet fighters close by as they train in the nearby Evers Military Operations Area. This evening, though, brought the sound of two West Virginia Army National Guard HH-60 Blackhawk helicopters to the site itself, and it was clear that something was amiss.

Christine Plumley, the site associate business manager, was leaving her office when she spotted the helicopters landing on the site airstrip. She grabbed Butch Wirt, the facility engineer, and drove to the aircraft to determine why they had landed. Plumley and Wirt were met by Major Kevin Hazuka of the West Virginia Army National Guard (ANG), who was piloting the aircraft.

He had just dropped two of his medics off at the crash site of a Navy MH-60 Nighthawk helicopter that had been participating in a joint military training exercise. The helicopter had crashed en route from Ft. Pickett, Va., to Camp Dawson, W.Va. Hazuka and his crew had been searching for the downed aircraft and its crew of 17 since about 2:00 p.m. that afternoon. The weather was cold and snowing, and the Navy helicopter had crashed in an extremely remote area of mountainous Pocahontas County.

Bringing Hazuka to the Jansky Lab--a building typically used for staff offices, workspaces, and equipment rooms--Plumley offered the use of the phones so that the major could begin to make calls to his command center. One of the Blackhawks that set down with Hazuka had mechanical problems and the major's chopper was nearly out of fuel. He called for refueling trucks from the nearest ANG Incident Command Center--in Parkersburg, W.Va., about four hours' drive from the Green Bank site--and then coordinated his team to begin a rescue plan.

The site Unicom system, which operates in the aircraft frequencies, allowed Hazuka to talk to a C-130 plane brought in to circle the crash site and relay information to the ground crew. Plumley called Mike Holstine, the site business manager, Karen O'Neil, the Green Bank site director, and a number of other NRAO employees who volunteered their time (and went without sleep) to help out with what would turn into a 40-hour, round-the-clock battle against time to set up a command center, aid in the formulation of a plan to rescue the downed crew, and support the military operation in every way possible.

Local volunteer firefighters and rescue personnel from the Bartow-Frank-Durbin (BFD) Fire and Rescue squad, many of whom are also NRAO employees, converged on the site, as did news media from the region. Once final coordinates of the downed craft were obtained, Holstine was able to generate 3-D elevation maps of the crash site and overall topographic and photo maps of the terrain. Knowing the mountainous terrain well, the BFD members were well aware of the considerable difficulties they were going to face in reaching the crew.

NRAO's offices and conference rooms were rapidly turned into command posts for communications and the command center for the ANG. While the ANG focused on coordinating the heroic rescue effort undertaken to bring medics and crews the approximately seven miles, through the five- to eight-foot snow drifts, to rescue the downed soldiers, NRAO staff came in to prepare food, drink and beds (in the small, on-site student bunkhouse) for the hungry and exhausted ANG soldiers at the NRAO command center.

NRAO staff also came in to plow the airstrip of snow, which had been accumulating in the area for the last two months, as well as to open the machine shop for the helicopter crews and supply them with ladders and tools for the repair of one of the Blackhawks.

The site of the crash was almost halfway between the closest main road through the county, Route 92 at Cheat Bridge, and the Snowshoe Ski Resort. Coordination with the Shaver's Fork Fire and Rescue team at Snowshoe allowed rescuers to reach the crash site within several hours and finally retrieve the last of the crewmembers by noon the next day.

Incredibly, there were no fatalities in the crash and all crew members are expected to make a full recovery. This amazing result is all the more astounding because the temperature that night dropped to 17 degrees Fahrenheit and the crash site was in an extremely remote, mountainous and snowy area.

The Navy and Army National Guard recognized employees of the NRAO National Science Foundation (NSF) facility on March 10, 2010, at a ceremony in Elkins, W.Va. The employees also were recognized by the Governor of West Virginia at a ceremony at Snowshoe Resort on March 27, 2010. As stated by the ANG, their "tireless efforts, dedication to the mission, failure to yield to exhaustion, unyielding assistance, and hospitality" aided in the overall success in bringing these service men and women home and demonstrating the importance of the NSF in local communities beyond the normal mission.

As a follow-up to the crash, on April 21, 2010, about 20 U.S. Army National Guard and Navy personnel arrived at the Green Bank site to recover the remains of the downed helicopter. Three Blackhawks and a CH-47 Chinook helicopter brought the helicopter remains back to the Green Bank site. The salvage craft was lowered to the ground and the NRAO crane was used to pick the airframe from the ground and load it onto a lowboy Navy tractor trailer. The GBT forklift was used to load all of the basket parts into a Navy cargo truck. By 6:00 p.m. on April 22, the operation was complete and all personnel were headed back to their respective stations.