With NSF support, Nikhil Gupta and Paulo Coelho have pioneered research that reveals surprising insights about the effect of compression on bones, and about the limitations of the foams used for protection in helmets and armor 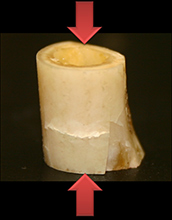 The fracture of a rabbit femur bone at a slow compression rate.

No sample is safe in Nikhil Gupta's Composite Materials and Mechanics Lab at the Polytechnic Institute of New York University.

Whether it's a small nugget of rabbit bone or a piece of industrial protective foam, all are bound for a custom-built compression machine designed to study how materials split and shatter.

Gupta, a materials scientist and mechanical engineer, and his team capture each compression with a high-speed camera that records over 10,000 frames per second to study every crack and splinter. The results are critical--they may ultimately help physicians better diagnose and treat injuries and aid engineers as they improve protection for military and civilian armor, including helmets.

Along with collaborator Paulo Coelho, a New York University College of Dentistry materials scientist (and a dentist who specializes in surgical research well beyond the jaw bones), Gupta has pioneered research that reveals surprising insights about the effect of compression on bones, and about the limitations of the foams used to protect bones in helmets and armor.

Gupta and Coelho found that bone injuries differ dramatically depending on the speed at which the bone is compressed. At high compression rates--like a shock wave from a bomb blast or a hard hit in a football scrimmage--bones show widespread micro-cracks so small they can only be detected by a scanning electron microscope.

When bones are compressed slowly, as when jogging or falling, fewer cracks occur, but they tend to be larger and easily spotted. The experiments were conducted on rabbit femur bones, though the scientists believe similar findings would apply to a range of human bones.

"We were surprised to find that not only did the nature of the bone fractures change depending on the speed of compression, but that bones crack in different directions based on speed," Coelho said. Learning that bones need to be reinforced from multiple angles to prevent injury brought Gupta back to the initial impetus for his research--improving the foams used in protective military gear.

Two years ago, Gupta attended a conference at which veterans from Iraq and Afghanistan were discussing injuries related to Improvised Explosive Devices (IEDs). At that time, more than one-third of all war casualties were due to IEDs, which cause a unique type of brain injury that is difficult to diagnose. Those "closed" brain injuries result not from a direct impact or penetration of the skull, but from the force of the compression. Similar damage may be happening to other organs and bones, as well.

Damage from blast injuries is often not visible with today's diagnostic equipment, and soldiers may be pronounced healthy enough to return to the field. In many cases, the extent of the injury only becomes evident over time.

"I was already studying foams and body armor and developing new protective materials, but my approach changed when I learned about the nature and prevalence of IED injuries," Gupta said. "I realized it was critical to understand how the bones themselves behaved in these circumstances in order to devise the next-generation of protection."

Gupta set out in search of a collaborator who could bring essential medical expertise to the investigations. When colleagues introduced him to Coelho, the connection was immediate. "I had discussed the project with several physicians, but we spoke completely different languages," Gupta said. "But because Coelho's previous research has focused on bone surgery and we have a common background in materials science, we were able to start working very quickly."

In addition to researching bone injuries, Coelho and Gupta also exposed protective foams to their compression machine, called a "Kolsky Bar" system. They found that much like bone, foam materials behave differently as the rate of compression changes. Foams that seem soft when slowly compressed can become much stiffer under higher compression speeds. The team plans to investigate whether this change can actually increase, instead of reduce, the risk of injuries.

The next step for these two scientists is to combine the findings of the foam and bone studies by testing human bones and soft tissues with new formulations of protective foam. The ultimate goal is to enable manufacturers to create customized foams tailored to specific activities or environments. The implications are wide-reaching and may help designers create safer military armor, sports equipment and even automobiles and boats.

Since Gupta and Coelho showed widespread microscopic damage occurs in bones subjected to high compression rates, their findings also point to the need for improvements in medical diagnostic equipment that can one day detect injuries on a scale much smaller than current CT scanners.

According to Coelho, "now that we've seen how much bone damage happens at the extreme microscopic level, it's an opportunity to develop more sensitive devices that can diagnose such injuries and allow physicians to better treat that damage quickly."