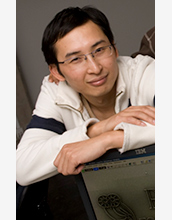 Tenacity, audacity, intuition, patience, a lot of talent and a little luck are healthy qualities for a young scientist. Jun Yao has them all.

The fifth-year graduate student at Rice University believed so strongly in his discovery two years ago that he went to the mat for it.

What Yao found could be a game-changer in the budding field of nanoelectronics. While working on a project to create memory devices based on graphite, he discovered that he could form nanocrystalline pathways in silicon oxide, an insulator that was underlying the graphite, simply by applying voltage. Smaller pulses of about 8 and 3.5 volts would repeatedly break and reconnect the pathway. Better yet, the technique became the basis for a two-terminal resistive memory bit about 5 nanometers (billionths of a meter) wide.

The breakthrough brings high-capacity, 3-D memory chips a step closer to reality; Rice's commercial partners are already working on prototypes that they expect will compete well with the technologies striving for dominance in next-generation computer memory.

Yao's revelation caused a splash in the press when his National Science Foundation (NSF)-supported paper, co-authored with fellow graduate student, Zhengzong Sun, and three Rice professors, was published in Nano Letters. That same day, the story appeared on page 1 of the New York Times.

It was the payoff for two years spent struggling to explain to a host of skeptics, including his lab partners, that the silicon oxide itself was all one needed to build next-generation computer memory.

"I don't remember how this idea came to me. Maybe it was just a random thought," said Yao, 29, who earned a bachelor's degree in electrical engineering and a master's in computational physics from Fudan University in his native China. He was helping with a graphitic memory project in the Rice lab of chemist James Tour when Yao decided to remove the graphite as a control experiment--and the circuit still worked.

"I was pretty surprised, yet excited. I did the experiment in the evening, got the result and sent an e-mail to Dr. Tour. I marked it 'Important! Hey, you need to look at this!' The next day, the prolonged debates over the mechanism between me and the graphitic guys began," he added.

Yao spent months testing his idea, combining silicon oxide with every material he could find. They all worked, he said, because the silicon oxide was carrying the load. One of his co-advisers, Rice professor and condensed matter physicist Douglas Natelson, pointed out researchers had been seeing similar effects in silicon oxide since the 1960s, but none had the resources to understand the mechanism.

What Yao finally found was that a strong pulse through a layer of silicon oxide sandwiched between semiconducting silicon would strip off oxygen atoms, creating the nanoscale bit between the terminals that subsequent pulses could switch on and off.

"I made all kinds of switching devices out of nanotubes, amorphous carbon, semiconducting titanium nitride, metal nanoparticles, and I presented this data to the graphitic memory people. But I didn't realize things that are clear to me aren't necessarily equally clear to other people," Yao said. "It’s a hard sell. Even Dr. Tour was 50-50, but he didn't make an arbitrary judgment and was willing to let the story develop."

While academic rivals prepared an influential paper on graphitic memory that was published in Nature Materials in late 2008, Yao worked to make his case, finally bringing enough evidence to win over Tour and his other co-adviser, Lin Zhong, a Rice professor of electrical and computer engineering. (Natelson said he was convinced from the start.)

"I've learned that the most convincing way to tell people something is not to hold your fist to fight; it's to smile and tell people, with patience, 'OK, this is what I did. What do you think?'" Yao said. "This process gave me a lot more than the science itself. It gave me a sense of how to sell my ideas in a friendly way."

Yao came to Tour's attention when the newly arrived student knocked on the Rice chemist's door. Tour thought it odd that a physics student would seek a job in his lab--but went with it, eventually.

"I came across Dr. Tour's website and thought they were doing some really interesting things," said Yao, who struggled to find a research home upon arriving at Rice (and eventually found three).

"He didn't have a position available, but I found out where and when his meetings were held and showed up every week." Tour finally noticed the quiet student sitting in the corner and hooked him up with a research scientist.

"He just kind of nudged his way in. It was hard to tell him no," Tour said.

Even before the new revelation, Yao had raised his profile at Rice, a nano research powerhouse celebrating the 25th anniversary of the Nobel Prize-winning discovery of the buckyball with a conference and gala from October 10-13, 2010.

Last December, Yao and a research partner surreptitiously grew "nano-owls," forests of carbon nanotubes shaped into the Rice University logo. He painstakingly drew the owl into an electron-beam controller by tracing the logo with a mouse.

Now, Yao hopes to one-up his latest paper by finding a way to visualize the workings of his silicon oxide memory. "This project is not yet done," he said. "I hope I can provide more details about how it works."