A myriad of methods for watching water molecules in motion advances critical understanding of biology, chemistry and climate science 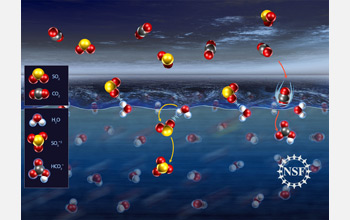 Sulfur dioxide molecules in the atmosphere form a weak bond with water molecules.

Water (H2O) is a unique molecule that holds amazing properties. Scientists have a good grasp of the structure and chemistry of individual molecules of water. But understanding how large numbers of these molecules move and interact--within bulk liquid water, or at the interface between water and air--is much more complicated.

Theoretical chemist James Skinner, at the University of Wisconsin in Madison, has been researching water for over a decade.  According to Skinner, understanding the dance of water molecules is key to understanding how all of life works.

"We now appreciate that it is virtually impossible to grasp almost anything at the molecular level about biology, without understanding how water molecules interact with biomolecules within cells," said Skinner, who is supported by a grant from the National Science Foundation (NSF) Division of Chemistry. "This includes fundamental processes like protein folding, photosynthesis and the biology of vision."

Skinner and his research group at the University of Wisconsin are analyzing and interpreting the results of experiments that use infrared light to probe the motions of molecules in liquid water.

The vibrations between oxygen and hydrogen atoms within a molecule absorb infrared light. By varying the frequency of the light and measuring how much is absorbed at each frequency, the researchers record a graph called an "absorption spectrum." More modern techniques use ultrashort pulses of infrared laser light.

"Data from these experiments contain information about local molecular environments," Skinner said. "But this information is often hard to extract. We use first principles calculations, molecular dynamics simulations, statistical mechanics, and basically any theoretical approach that will enable us to further our understanding."

One method in particular, molecular dynamics simulation, allows the researchers to "see" water molecules in action.

Like designing the computer graphics for a movie, they start with an initial configuration of the molecules and then advance it forward in time, frame by frame. To do this, the team created a model of the potential energy for a large collection of water molecules in terms of interactions between groups of two or three molecules.

"We can show the trajectories (in time) of all the atoms in a system," Skinner said."The simulations--and hence the movies--always involve approximations (for example, using classical mechanics instead of quantum mechanics for motion of the atomic nuclei)." Even so, the simulations have proved to be quite accurate.

Up next for Skinner's team, is a study of the ways biomolecules such as peptides, proteins, nucleic acids, and membrane lipids, dissolve in water. "Experiments, coupled with new theoretical and computational techniques, will surely shed new light on the critical problem of water dynamics around biomolecules, and its effect on how they function," he said.

In addition to boosting biomedical research, Skinner believes that understanding the dance of water is also crucial to climate science. "To model the chemical and physical processes in the atmosphere one needs to understand reactivity of aerosol particles, which is often controlled by water dynamics at the surface of the aerosols," he said.

Krzysztof Szalewicz , professor of physics and astronomy at the University of Delaware, uses the ab initio, or "first principles," approach to researching water molecules in motion.

With support from NSF's Quantum Calculations Program in the Division of Chemistry, Szalewicz and his team start with what is known about each type of atom within the molecule--in this case hydrogen and oxygen. Then they plug that information into the Schrödinger wave equation.

"By solving Schrödinger's equation, we can predict the properties of lighter atoms and molecules almost exactly," Szalewicz said. Physicist Erwin Schrödinger developed his Nobel Prize-winning equation in 1926 as a way to explain the wave-like nature of particles at the nanometer (billionth of a meter) scale. His equation is central to the theory of quantum mechanics.

"We can model water very accurately and we did systems as large as 40 atoms fairly accurately," Szalewicz said.  "However, that is about the limit at the present time."

But in this case, the model's predictions were gratifying. "The agreement of our predictions with experiment for water was excellent," he said.

"If you look at the whole range of properties, our predictions are better than any published ones, even including results obtained by empirical approaches," Szalewicz said. "Because liquid water is a rather complicated system despite the simplicity of water molecule itself, this was a demanding test for our approach."

Meanwhile, Martin Gruebele and his research team at the University of Illinois, sponsored by NSF's Division of Molecular and Cellular Biosciences, follow a different method. The team uses pulses of terahertz (THz) radiation, which falls between infrared and microwave radiation on the electromagnetic spectrum, to directly measure the movements of water molecules around proteins. Because water molecules consist of a single oxygen atom and two hydrogen atoms, they are dwarfed by the complex, folded protein molecules, made up of hundreds or thousands of individual atoms.

"Proteins influence the dynamics of up to thousands of water molecules surrounding them out to a distance comparable to the size of the protein," Gruebele said.

These affected molecules form a thick "solvation shell" around the unwieldy protein. In the process, the two-way interaction between water and protein causes hydrogen bonds and other weak bonds in the molecules to change and rearrange.

To measure just how far this influence stretches, Gruebele's group flashes laser light pulses in the THz range through a mixed sample of protein and water. When this radiation hits a molecule, if its wavelength matches the natural vibration frequency of the atomic bonds that join the molecule together, it absorbs that energy. This extra energy causes the bonds between atoms to vibrate with regular, repetitive motions.

"Pulsed THz light oscillates about once every picosecond (one-trillionth of a second)," Gruebele said. And since water molecules and proteins both vibrate on a similar time scale, they can absorb light with wavelengths in that range.

In order to "see" what is taking place inside the molecules, the researchers used a spectroscope to measure the specific wavelengths absorbed.But in the process, they discovered something totally unexpected.

"We knew that dry protein powder absorbs less THz light than water does," Gruebele explained. "So we expected that adding protein powder to water would decrease the amount of light absorbed."  But instead it increased, as long as protein concentrations remained low.

"We concluded that this happens because the solvation shell actually absorbs more light than bulk water, which more than makes up for the smaller absorption of light by the protein," Gruebele said.

"As you add more protein molecules, the solvation shells around each one begin to overlap and the absorption stops increasing," he added. "This actually allows you to measure the size of the shells: We found they are almost three nanometers (three billionths of a meter) in diameter. This is small in human terms, but gigantic in terms of the size of a water molecule."

"The combination of these four techniques shows that water adopts a "folded" structure and dynamics very early during the protein folding process," he explained. "Thus, water is an early driver and an integral part of that process."

In their next phase of research, Gruebele and his team will look at how water molecules mediate the binding of two biologically active molecules, such as two proteins, or a drug and a protein.

"Eventually, this would give us a much better estimate of how strongly drugs bind and why they are specific," he said. "Such information would save a great deal of live animal testing, and reduce the cost of pharmaceutical screening in the search for drugs."

Another NSF-funded research effort, headed by Geraldine Richmond and her team at the University of Oregon, is probing the interactions between surface water molecules and atmospheric gases.

"I've always been fascinated by water--the way it flows, how it controls our body temperature and the temperature on this planet, how things can float on it," said Richmond.

"And the surface of water to me is the most fascinating," she said. "It plays such an important role in our environment and our bodies." Richmond and her group are supported by an award from NSF's Electrochemistry and Surface Chemistry Program.

"We want to understand how environmentally important gases such as sulfur dioxide (SO2) and carbon dioxide (CO2) interact with water surfaces," Richmond said. "We know a lot about how such gases behave once they are in water, but not much at all about what happens when they first make contact."

Richmond's team was surprised to find that SO2 tends to hang out at the surface before submerging, whereas CO2 dives right in.

"This is the first time that anyone has ever measured, with this level of molecular detail, a gas-surface complex at the surface of liquid water," she said. "We are now investigating a whole series of important environmental gases, ions and solutes at the water surface."

The group is also looking at the differences between surface chemistry and chemistry in bulk water. "What we do is to try to understand the underlying principles behind the chemistry that occurs in the atmosphere," Richmond said.

"For example, nitric acid accumulates in aerosols and clouds," she explained. "Since a lot of the reactions that happen in the atmosphere occur on the surface of aerosol particles that contain these strong acids, we wanted to understand if nitric acid continues to act as a strong acid when it sits at the surface of the aerosol."

Because aerosol interactions are so complex, the scientists simplified their study to focus on how individual molecules of nitric acid behave at the surface of a solution of nitric acid in water.

"What we find is quite remarkable," Richmond said. "When nitric acid sits at the surface of water, it acts as a weak acid -- not a strong one. This comes from the fact that at the surface, it is surrounded by fewer water molecules. Consequently it doesn't dissociate, or get pulled apart, and therefore is far less reactive there than inside the bulk liquid."

Richmond's teamw is also fascinated by interactions between oil and water. "Normally people think that oil and water don't mix; but there is a weak attraction between them," she said. "That leads to some interesting consequences."

"We find at this oil-water interface, water is highly oriented and creates conditions that can facilitate some of the most important chemistry in our bodies," Richmond said.

"Related to this we try then to understand how the unique properties of the junction between water and oil influences the adsorption of surfactants such as soaps, dispersants and polymers."

Why is this important? "Everything from mayonnaise to oil-spill dispersants relies on surfactants such as these adsorbing at the interface and in some cases, working to keep the oil and water separated," she explained.

"Our laboratory work provides unique insights into the molecular properties of the interface but this information is somewhat two-dimensional," Richmond said. "There are missing pieces."

To fill in the three-dimensional picture, the scientists count on computer simulations. But there is a downside. "Often you don't know how realistic the results are and whether the models you are using in your simulations are correct," she pointed out.

"However, in our case we can check their accuracy by seeing how close the computer results match our experimental results," Richmond added. "Then we dig into the calculations to see what kind of molecular interactions gave us that match. So they really work hand-in-hand to give us a robust three dimensional picture of what is happening at the surface of water."