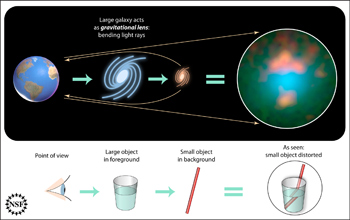 This diagram illustrates a cosmic phenomenon known as gravitational lensing.

A chance alignment of galaxies, recently observed by a space observatory, presents the perfect opportunity for studying star-forming galaxies billions of light-years away.

For decades, astronomers have used Einstein's concept of a "gravitational lens" to study the magnified images of distant objects.  A lensing effect occurs when a massive object, such as a galaxy, is located exactly between another object and an observer.

Because the galaxy in front is so massive, its strong gravitational pull bends the light coming from behind it, creating distorted images of the background galaxy.

Sometimes, the image is so warped that it appears as a ring or arc around the foreground galaxy. Other times the result is repeated images of the background galaxy, similar to what happens when looking in a funhouse mirror. But in all cases, the distorted images are magnified, making the background galaxies appear brighter and therefore easier to study.

The universe contains billions of galaxies, but getting the chance alignment that produces a gravity lens is something like finding a needle in the haystack. Scientists must sift through large volumes of data to discover only a few possibilities, and then study these further to verify that a lensing event has occurred.

"Since about 1978, astronomers probably have found about 200 gravitational lensing events, but that involved a very slow search through lots and lots of data," said Asantha Cooray, Professor of Physics and Astronomy at University of California in Irvine.  He and dozens of other scientists from around the world collaborated on a recent project to make the process faster.

Herschel is a European Space Agency (ESA) mission with significant participation from NASA. It was launched in May of 2009, and now orbits a distant point about 1.5 million kilometers (930,000 miles) from Earth on the opposite side of our planet from the sun.

Because Herschel's mirror is the largest astronomy mirror ever launched in space (3.5 meters, or about 11.5 feet across), it can take the sharpest pictures to date at the wavelengths it detects.

"Herschel-ATLAS is aimed at understanding how stars form inside galaxies and to shed some light on the past history of galaxy growth," said Cooray who is now the lead US (NASA) investigator for Herschel-ATLAS. Cooray is supported by a CAREER award from the National Science Foundation (NSF).

"Astronomers believe most galaxies undergo a rapid phase of star-formation where hundreds to a thousand stars are born within a galaxy over a year, with such activity lasting over a total period of a few to several million years," Cooray said.

"This phase involves stars that are formed in clouds enshrouded by dust," he said. "Unfortunately existing ground and space-based observatories miss most of this picture since they operate at optical wavelengths and optical light cannot penetrate dust clouds to see the young stars inside."

Although the background galaxy behind a gravitational lens often can't be seen by visible light telescopes, these ancient objects still glow with radiant energy in what's called the submillimeter range-wavelengths of light from about 0.3 millimeters to 1 millimeter. The Herschel observatory was specifically designed to detect energy at submillimeter wavelengths, between the microwave and far-infrared regions of the electromagnetic spectrum.

In a recent article in the journal Science, Cooray and the rest of the team describe how they used data from the Herschel-ATLAS survey, along with instruments at several ground-based observatories all over the world, to search out and pin down these dim star factories.

Using maps made by Herschel, the researchers chose five gravitational lens "candidates." These were the brightest spots they could find in the submillimeter-wave images taken of just one small section of the universe.

"To demonstrate that these bright galaxies are indeed lensing alignments of a more distant faint galaxy magnified by an intervening massive galaxy, we needed to establish the distances to both the background galaxy seen in Herschel and the foreground galaxy seen in optical images along the same sky directions," Cooray said.

To calculate these distances, they tested each candidate for redshift.

A shift in the red direction

Redshift is caused by the expansion of space as the universe ages. The further away an object, the longer its wavelengths stretch. Because red light has longer wavelengths than other visible light, the phenomenon is called redshift.

To measure redshift of the galaxies, NSF contributed support for two critical instruments: The Z-Spec, located at the Caltech Submillimeter Observatory (CSO), on the summit of Mauna Kea in Hawaii, and the Zpectrometer, at the National Radio Astronomy Observatory's Green Bank Telescope (GBT) in West Virginia.

According to Andrew Harris, professor at the University of Maryland's Department of Astronomy, the two instruments were named after the letter ‘z," which in astrophysics is used as a symbol of redshift. Harris is the primary investigator for the Zpectrometer, at GBT.

"The goal of this project was to build a ‘redshift machine' that can find the redshifts of distant galaxies with very little additional information," Harris said. "Then we can use the information from the spectra to understand the galaxies' interstellar media."

Both the Z-Spec and the Zpectrometer measure the spectral lines of incoming radiation. Spectral lines are patterns of light or dark lines that show up at specific wavelengths for specific atoms or molecules. These lines can be used as a signature or fingerprint, to identify the types of gases found in the galaxy being measured.

The instruments measure the redshift by measuring the change in wavelength of these spectral lines caused by the expansion of the universe. Greater distance means greater redshift.

"Of course, to measure a change in wavelength, you must first know what the original wavelength was," said James Aguirre, professor at the University of Pennsylvania and Primary Investigator for the Z-Spec at CSO. "This is greatly helped if we can identify an emission line whose identity is known, and for which we know the emission wavelength at rest from laboratory measurements."

Because carbon monoxide (CO) is abundant in distant galaxies, scientists use it to as a "fingerprint" to calculate the redshift of a galaxy.

"You can think of the CO spectral lines as marking on a ruler, which stretches depending on the distance of the galaxy," Aguirre said. "Measuring the amount of stretch gives the redshift."

"The larger the redshift the farther away the galaxy," Cooray said. "The galaxies that we have found are at redshifts around 3, which roughly correspond to an age of the universe about 2 to 3 billion years--that's about 11 billion years into the past from today."

Aguirre and the Z-Spec team at the Caltech Submillimeter Observatory observed three of the five lens candidates and detected redshifts which were higher than and inconsistent with the redshifts derived from the optical spectroscopy of the visible, foreground galaxy.

"Z-Spec has specifically shown these three Herschel-ATLAS galaxies are at high redshift," said Aguirre. "Armed with this fact, other researchers were able to confirm that the brightest galaxies in the survey are being gravitationally lensed."

Meanwhile, the Zpectrometer team at the Green Bank Telescope was able to independently confirm the distance of one of the five galaxies, and to measure the distance of another.

"We showed all five of the bright galaxies seen by Herschel are lensed, which is not true for example when we look at optical images of the sky," Cooray said. Without Herschel, these lens events would have been completely missed.

"Given that we found five lensed galaxies easily with only two percent of our final map covered, the expectation is that we will find hundreds of such events with Herschel," Cooray said.

And with these multiple lenses, the scientists hope to tunnel further into the past, in order to better understand the history of the early universe.

"Big galaxies in this early era are unexpected because of our current model of mass assembly in the universe," said Harris, "So finding and explaining the existence of very massive young galaxies provides tight constraints on the models that drive our understanding."

Related Awards
#0838261 Astronomical Studies with the Caltech Submillimeter Observatory
#0708653 Nowhere Left to Hide: Closing in on Dusty Galaxies at High Redshift
#0503946 Zpectrometer: An Ultra-Wideband Spectrometer for the 100-meter Green Bank Telescope
#0645427 CAREER: Near- and Far-Infrared Background Light and the Astrophysical and Cosmological Implications
#0239370 CAREER: Millimeter-Wave Instrumentation Development for Measuring the Redshifts of Submillimeter Galaxies
#0807990 Broadband Millimeter Spectroscopy with Z-spec: Molecular Diagnostics of Local ULIRGs and Redshifts for Submillimeter Galaxies