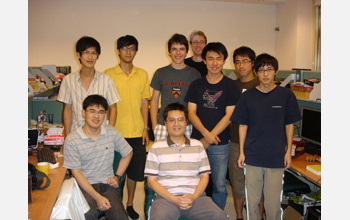 I am a doctoral graduate student in computer engineering, and so traveling to perform research abroad during the summer is not something I thought I'd be able to do. Most of my work is done on a computer, and, most of the time, it doesn't matter where it's performed.

In my work, I try to combine computer design and security by developing architectural improvements for computers: efficient circuits for performing cryptographic operations.

Instead of traveling abroad during the summer, most students in my field either intern with industry or stay at their home university. Through the National Science Foundation's (NSF) East Asia and Pacific Summer Institutes (EAPSI) program, I was able to realize the many benefits of spending a summer at a university abroad, traveling to Taiwan to work with a professor at the National Taiwan University (NTU), in the capital city of Taipei. My Taiwanese friends from graduate school were the ones who encouraged me to apply for the fellowship and selected my destination.

I was fortunate to work with Professor Cheng Chen-Mou in NTU's electrical engineering department. Cheng, who has an extensive background in mathematics, also performs research in computer security. Our goal was for me to learn more about the mathematics of different cryptographic algorithms while sharing my knowledge of computer architecture.

I intended to work on the design of new circuits that efficiently perform cryptographic operations, and to learn the science on which the underlying algorithms were based.

The summer program is eight weeks long--seven weeks of research plus a week of orientation and cultural activities--so we decided early on that I needed a modified project that could be finished during the summer period. To that end, I collaborated with other students in Cheng's group to design and implement a microprocessor simulator.

For example, there is simple addition. A microprocessor usually has an "add" instruction that takes two inputs and produces a sum. Often, it is useful to have more complex operations.  For example, multiplying N by M could be done by performing N additions of the number M--but a better solution is to have a "multiply" instruction.

By using a simulator, researchers and engineers are able to see which is more efficient in terms of time and energy--perform the N additions or have the multiplication instruction--and the efficiency depends on how the algorithm or instruction is implemented.

While there are a number of commercial and academic simulators for a range of microprocessors, we were interested in a new, unavailable microprocessor design from Cheng's collaborator.

The goal of our simulator was to investigate novel instructions that could accelerate cryptographic applications in the new microprocessor.

During my stay at NTU, I was able to complete the project in time, and I hope to continue the collaboration in the future. In addition to working with my host and his group, I had a chance to take part in numerous workshop classes organized by my summer host and his colleague. Thanks to the program, I was able to meet many excellent researchers and hope to return to Taiwan in the near future.

While the EAPSI fellowship was meant to enable us students to work on our projects, we were also encouraged to find, and fully take advantage of, opportunities to explore the island nation in our spare time on the weekends.

I was housed in a brand new dorm at NTU along with a few other EAPSI fellows, and from this home base, I was able to explore much of the capital city, due to excellent MRT (metro) and bus lines. While I do not speak but five words of Mandarin (and none in Taiwanese), I was able to get around with little trouble (although I did get plenty of help from my Chinese-speaking friends when ordering food).

I visited numerous museums and temples in Taipei, and the nearby cities of Danshuei and Keelung, and I also made a trip to the middle of the island to explore the beautiful Taroko Gorge.

The research work, combined with the various trips around Taiwan, made for a highly productive summer. Performing research abroad, and not just at my desk, enriched my career.