How the Sun Gets Its Spots

To prevent solar damage to communication, navigation and other high tech systems, scientists are determining the temperatures, composition and movement of materials inside the sun 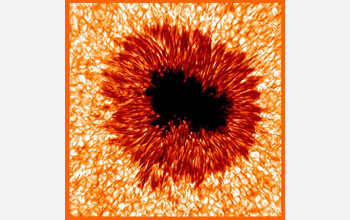 High-resolution image of a sunspot taken at the Sacramento Peak Observatory in New Mexico.

Sunspots are huge, dark, irregularly shaped--and yet, temporary--areas of intense magnetism on the sun that expand and contract as they move.

"The diameters of sunspots are frequently on the order of 50,000 miles," said Frank Hill of the National Science Foundation's (NSF) National Solar Observatory. "By contrast, the Earth's diameter at the equator is about 8,000 miles. The intense magnetism of sunspots usually reaches about 3,000 Gauss. [The more intense a body's magnetic field is, the higher its Gauss number.] By contrast, refrigerator magnets average about 5 Gauss, the sun averages about 1.0 Gauss, and the Earth averages about .50 Gauss."

Most of the sun's surface is covered by convection cells--roiling and boiling gases that bring heat up to the sun's surface from the furnace in its core via convection. However, the intense magnetism of sunspots inhibits convection and the associated heat transport to them. Therefore, their temperatures range from about 5,000 to 7,600 degrees Fahrenheit (F), cooler than their surroundings, which hover around 10,000 degrees F.

Sunspots are cyclic. The number of sunspots increases and decreases over a period of approximately 11 years. During solar maximums, when sunspot activity is high, areas near sunspot clusters experience particularly frequent explosive activity, such as Coronal Mass Ejections (CMEs), massive blasts of highly charged particles and gases hurled from the sun. CMEs can pose serious threats to people because they may damage satellites, increase the radiation exposure of astronauts, disrupt communication and navigation systems, and knock out power grids and other high-tech systems.

"During the solar cycle, slow (20 to 30 mile per hour) flows of plasmas, known as jet streams, move from east to west across the sun and slowly south from the solar north pole and slowly north from the south pole to the equator," Hill said.

Jet streams reach depths of about 65,000 miles below the sun's surface. "Sunspots and the jet stream are closely associated with one another in terms of location and behavior," adds Hill. Sunspots initially appear during a solar cycle when the center of the jet stream reaches a latitude of about 25 degrees. Also, sunspots are born above the jet stream and reach deep inside the sun into the stream.

At the beginning of any given sunspot cycle, sunspots are usually born in clusters at high latitudes. But by the end of the cycle, the birthplace of sunspots has--like the jet stream--usually moved to the equator.

How can scientists possibly determine what's happening in the sun's depths from our vantage 93 million miles away? They observe the speed of waves travelling through the sun, which manifest on the sun's surface as observable up-and-down oscillations of gases. From those oscillations, scientists can deduce the temperatures, composition and movement of materials inside the sun.

The technique of "seeing" inside the sun by observing its oscillations--known as helioseismology--is analogous to techniques used in Earth seismology to "see" inside our planet by measuring how long it takes earthquake-generated waves to travel through the interior and reach the Earth's surface.

Important institutions for helioseismology research are the National Science Foundation's Solar Observatory Network and the Global Oscillation Network Group (GONG), a worldwide network of telescopes that continually observe the sun. Read about the latest solar discoveries and see more stunning images at the Solar Observatory Network and GONG websites.