Exotic Discovery Made in Soft Polymer 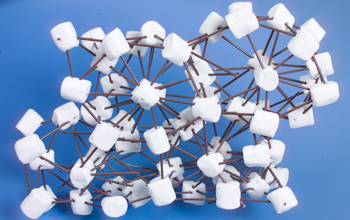 Professor Frank S. Bates and his research team at the University of Minnesota in Minneapolis have discovered an unusual type of soft material that was conceived of over 50 years ago, but has never before been found in a plastic--although it has been seen in stainless steel and other metal alloys.

Bates' group, which is funded by the National Science Foundation's Division of Materials Research, specializes in creating a particular class of material, called block copolymers.

"This class of polymers has been studied intensively for nearly half a century, so discovering a new equilibrium structure in a diblock copolymer is unexpected," said Bates. "I have used the analogy that this is a bit like finding a new planet."

Polymers are gigantic chain-like molecules which contain hundreds or thousands of repeating units ("poly" means "many;" "mer" in chemistry means a "repeat unit").

To visualize a polymer, think of a very long string of beads, where each bead represents a basic chemical building block, or mer. Different colors stand for different repeat units. Block copolymers are created by connecting two or more of these long sequences.

For example, a diblock copolymer might contain a string of a thousand red beads followed by a sequence containing a thousand blue beads ("di" means "two"). In principle, two, three or any number of bead strings can be linked together, limited only by the strategies cooked up by synthetic chemists, Bates said.

These block copolymers can be created with a number of molecular architectures--linear sequences, branched designs or even star patterns.  Different arrangements give each new material different physical characteristics.

Bates and his team stumbled upon the completely new material quite by accident.

"My students were exploring the mechanical properties of polymers made from poly(lactide)--a derivative of corn--and poly(isoprene)--a synthetic form of natural rubber," Bates said. "They discovered a new and unexplainable x-ray scattering pattern."

The unusual pattern turned out to be associated with a long-predicted crystal structure, now known as the Frank-Kasper sigma phase.

"This phase was named for Sir F.C. Frank, a famous British physicist known for important theoretical contributions to the field of materials physics," Bates explained. "In the 1950s, Frank and General Electric Corporation Researcher J.S. Kasper wrote several creative papers discussing how spherical objects such as atoms might arrange into complex crystal structures."

Bates and his team reported their discovery of a Frank-Kasper sigma phase found in two different block copolymers in a recent issue of the journal Science.

The interesting thing about block copolymers is that they can spontaneously self-assemble into tiny nanoscale structures, including spheres, when cooled. The spheres form because the different blocks, though chemically connected, repel each other like oil and vinegar.

To overcome this self-revulsion, the material organizes itself so that a core of one type of block circles in on itself, leaving a "halo" of the second type of block hanging out like a hairy fringe.

"Imagine that dozens of block copolymers segregate to form spheres, each composed of a red spherical core surrounded by and a fuzzy blue halo," Bates said. "In a block copolymer melt this occurs everywhere, leading to a relatively dense ensemble of such hairy spheres."

Airline passengers aren't the only ones who experience "packing frustrations." As polymers cool from a liquid state to an ordered state, they, too experience the frustration of trying to cram into a small amount of space.

"In order to optimize the packing of the hairy spheres together into a solid crystalline material, they find the most efficient way to fill space," Bates explained. "Different arrangements lead to different levels of stretching and compression of the hairy halo."

To illustrate the Frank-Kasper sigma phase in the new block copolymer crystal, Bates along with graduate student Sangwoo Lee, used large fluffy marshmallows to represent the hairy spheres, connecting them together with plastic coffee stirrers

"Marshmallows represent the "squishiness" of the hairy microspheres," Bates explained, "and they are flexible enough to allow the many different angles required to combine them in the complicated sigma-phase configuration."

In any crystal, a unit cell is the smallest three-dimensional pattern of atoms or molecules that is repeated in any direction as the crystal grows. Most sphere forming block copolymers, and certain atomic crystals such as iron at room temperature, exhibit a cubic structure, known as the body-centered cubic or "bcc arrangement," according to Bates.

A typical bcc crystal formed from iron has only two atoms per unit cell while a diamond, which forms a face centered cubic or fcc structure, has eight atoms per unit cell. In contrast, the Frank-Kasper sigma phase involves a complex combination of triangular and square groups of 30 block copolymer microspheres fitted together in a single unit cell.

"The sigma-phase is a true three-dimensional crystal, albeit one that has a gigantic unit cell," said Bates. "This new arrangement indicates that there are packing forces at play related to those that produce quasicrystals, because a simple misplacement of sigma elements during phase formation could lead to a quasicrystal."

Quasicrystals are materials with irregularly repeating, or aperiodic, patterns of atoms or molecules that do not contain unit cells that repeat or translate as do true crystals. "There is a close relationship between aperiodic order and periodic crystals with large unit cells," Bates said. "The Frank-Kasper sigma-phase represents the "periodic approximant" to certain dodecagonal (12-sided polygon) quasicrystals."

Now that they've discovered the first block copolymer Frank-Kasper sigma phase, Bates and his team are trying to determine the range of block copolymer molecular parameters over which the sigma-phase occurs. "We are synthesizing new polymers and investigating them by x-ray scattering and electron microscopy," he said.

"Also, we will collaborate with theorists to determine whether the sigma-phase can be accounted for using current statistical mechanical tools," Bates added.

"The large unit cell suggests that we might be able to produce crystal structures with unit cell dimensions that are significantly greater than 100 nanometers (nm)," he said. "As the unit cell dimension approaches the wavelength of visible light (400 nm-700 nm), I anticipate potential uses in photonics."

Photonics is the concept of using photons, or light particles, rather than electrons, to transmit video and voice signals (fiber optics) or carry out computations (optical computing). "The potential for application of the Frank-Kasper block copolymer in photonics would be enhanced if actual quasicrystal phases are discovered," Bates said.

"The principles associated with sigma-phase formation in the diblock copolymers might be extrapolated to other materials formed from spherical cores and "hairy" halos," said Bates. "This might be accomplished by chemically attaching polymer chains to the surface of spherical nanoparticles. A large refractive index difference between the spherical core (perhaps made from a metal) and the polymer halo would be conducive to photonics."

According to Bates, this particular research is similar to previous projects that have resulted in commercial products, including a new type of plastic and fracture resistant epoxy.

"However, in my mind, what is most significant is the connection between very disparate fields (e.g., metals, polymers, etc.) represented by this work," he said. "Nature provides certain basic ingredients upon which materials are formed. Whenever a new and unanticipated result such as this one surfaces we are forced to reconsider our presumed understanding of these scientific fields."