The Tasmanian Devil in the Wastewater 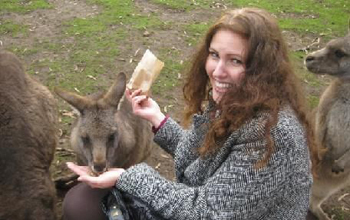 Michelle Meighan feeds a kangaroo during her summer in Tasmania in 2009.

In the months leading up to the summer, a question that I frequently heard was "Tasmania? You're going to spend your summer in Africa?" Another popular comment was "You realize it's winter down there, right?" Yes, I was fully aware that I was "giving up" my summer (the 115 degrees Fahrenheit oven that is a Phoenix summer) for a somewhat colder climate, but no, I was not going to Africa.

Tasmania, or "Tassie," is a heart-shaped island south of mainland Australia. I was able to study in Tasmania through a fellowship provided by the National Science Foundation (NSF). NSF, in conjunction with the Australian Academy of Science, funded 20 American students to travel to Australia to facilitate our research here in the U.S. through the East Asia and Pacific Summer Institutes (EAPSI) program.

I worked with Michael Breadmore in the Australian Centre for Research in Separations Sciences (ACROSS) at the University of Tasmania. My research combined my dissertation work in counterflow electrophoretic separations (which involves analyzing substances based on how they flow through an electromagnetic field) with an ongoing electrokinetic supercharging project in Breadmore's lab.

Electrokinetic supercharging, although it sounds like a trait of a cartoon hero, is simply a method for using an electric field to concentrate substances for analysis.

Whereas my work at Arizona State University allows me to study proteins with a device developed in-house, my work with Breadmore took advantage of more powerful commercial instruments to study non-steroidal anti-inflammatory drugs (NSAIDs) in wastewater.

We chose NSAIDs--the technical term for a class of common, over-the-counter painkillers--because they are hard to eliminate from wastewater, which results in their release into the environment. Once in our waterways, NSAIDs have the potential to cause adverse health effects in both aquatic and terrestrial organisms.

In Breadmore's lab, a graduate student had recently finished his dissertation work on the electrokinetic supercharging technique. He was a tremendous help for my research and for tackling experimental difficulties.

The research results are aiding development of a technique for improving separations analyses, specifically a method that involves increasing pressure when chemicals of interest are injected into the electrophoresis system.

My work focused on experimental parameters--such as the various electrolytes and their concentrations, and the duration and magnitude of the potential applied--to effectively separate and concentrate various NSAIDs.

While successful, my experience was not only about research--I also "begrudgingly" fulfilled NSF's request for cultural experience.

Australia is an amazing country. I was fortunate enough to sit in on "Question Time" at the House of Representatives in the capital, Canberra, where I gained an appreciation of Australian politics. I also visited a wildlife reserve where I learned about the facial tumor that is rapidly killing the population of Tasmanian devils.

Thanks to television, I had believed that Tasmanian devils were brown, which is incorrect--they are black! Furthermore, while they don't spin in circles, they do make a hellish noise when feeding.

Of course, my cultural experience would not have been complete had I also not enjoyed a meat pie at an Australian Rules "Footie" game.

Participating in the EAPSI program was a truly remarkable experience. I was able to work with an amazing group of diverse colleagues and research a novel technique, all while immersing myself in the Australian culture. The opportunity to collaborate with Breadmore in the ACROSS program enabled me to learn a new research method, as well as gain a deeper understanding of electrophoretic separations through various interactions with researchers in the university's chemistry department.

Additionally, through a presentation of my dissertation work, I was able to engage in beneficial discussions with my Australian colleagues that have afforded me a fresh perspective on my research, applications and methodologies. The experience has been invaluable to my development both on a personal and professional level ... even if it wasn't in Africa.

Related Websites
LiveScience.com: Behind the Scenes: The Tasmanian Devil in the Wastewater: http://www.livescience.com/culture/tasmanian-wastewater-bts-110118.html