Sook-Lei Liew writes about the opportunity to conduct research examining the role of experience on neural networks during a summer in China, as part of NSF’s EAPSI program 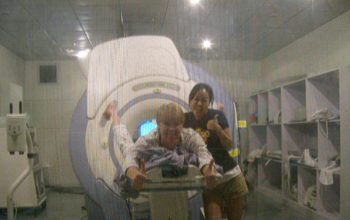 I had wanted an opportunity to return to China, where I had previously lived for several months, so when I saw the program announcement for NSF's East Asia and Pacific Summer Institutes (EAPSI) program, I immediately googled "China social cognitive neuroscience."

There was one relevant result--Professor Shihui Han at Peking University.

I emailed him, introduced myself and asked if I could work in his lab if I received the fellowship. To my surprise, he agreed.

A few months later, I arrived in Beijing, China, just months before the Summer Olympics were about to take place.

I had spent the prior month preparing a functional magnetic resonance (fMRI) study of how experience changes the neural activity patterns that occur when people view familiar or unfamiliar actions or races.

Prior research has associated two primary brain region networks with helping people understand other individuals' actions. One is the mirror neuron system (MNS), in which sensorimotor regions of the brain involved in executing an action also become active when observing the same action, possibly allowing us to understand others' actions by internally replicating them ourselves.

The other is the mentalizing system, which tends to be active during higher-level, abstract thinking, such as when we try to understand why someone is doing something.

However, it has been unclear how one's experiences with a stimulus would modulate the interaction between these networks. To explore this, we used fMRI to scan the brains of 18 Chinese participants as they observed videos of either racially familiar or unfamiliar actors (e.g., Chinese or Caucasian) performing familiar or unfamiliar gestures (e.g., a thumbs up versus a gesture in American Sign Language).

This finding provides novel evidence suggesting that during social interactions, we might try to internally simulate actions that we don't know in order to make sense of them--such as when we're in a new country and observing a culture-specific gesture we have never seen before.

In contrast, we might rely on regions of the mentalizing system to help us remember and understand gestures that we've seen before, as opposed to having to re-simulate them every time.

Overall, my lab experience for those two months was both stretching and awesome. By the end of the summer, I had successfully completed my first neuro-imaging study, learned Chinese phrases related to "magnetic resonance imaging" and "neuroscience," developed a great relationship with my host principal investigator and many labmates, and had the opportunity to experience a completely new lab, as well as a unique country and culture.

I probably spent at least 75-85 hours in the lab each week. We did our fMRI scanning on Saturdays from 7 a.m. until 9 p.m.! I also developed an amazing set of friends in the EAPSI program with whom I had a lot of fun as we explored outside the lab.

A few of us bargained for electric scooters early on and formed a makeshift scooter gang, zipping around and exploring the hidden parts of Beijing. With other EAPSI fellows, we also took weekend train trips (including one to Inner Mongolia), had weekly dinners at different local restaurants and enjoyed the fun and unexpected aspects of the local culture together. Some of my favorite memories are from the summer in Beijing.

To date, one manuscript from my EAPSI research has been accepted for publication, with a second manuscript in preparation, from another study that I did in collaboration with professor Han after my EAPSI summer. In addition, after receiving the NSF EAPSI support, I have been awarded several other fellowships and I have received funding to attend other summer workshops (including one in Japan!). The program provided an unparalleled opportunity to explore a new country, develop new collaborations, perform unique research and make lasting friendships with fellow travel-minded scientists.

I can confidently say that participating in EAPSI has been one of the most influential experiences of my doctoral career thus far, and one that has continued to provide amazing research opportunities even years later. It was an ideal opportunity to work hard, play hard and experience an amazing summer with limitless potential.