Are Invisibility Cloaks Hiding Around the Corner?

With NSF support, Elena Semouchkina and colleagues are experimenting with ways of using magnetic resonance to capture rays of visible light and route them around objects, rendering those objects invisible to the human eye 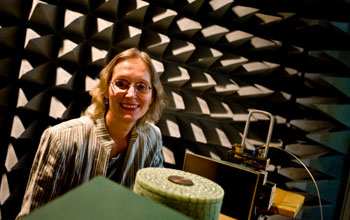 In 1897, H.G. Wells created a fictional scientist who became invisible by changing his refractive index to that of air, so that his body could not absorb or reflect light. More recently, Harry Potter disappeared from sight after wrapping himself in a cloak spun from the pelts of magical herbivores.

Countless other fictional characters in books and films throughout history have discovered or devised ways to become invisible, a theme that long has been a staple of science fiction and a source of endless fascination for humans. Who among us has never imagined the possibilities? But, of course, it's not for real.

While no one yet has the power to put on a garment and disappear, Elena Semouchkina, an associate professor of electrical and computer engineering at Michigan Technological University, has found ways to use magnetic resonance to capture rays of visible light and route them around objects, rendering those objects invisible to the human eye. Her work is based on the transformation optics approaches, developed and applied to the solution of invisibility problems by British scientists John B. Pendry and Ulf Leonhardt in 2006.

"Imagine that you look at the object, which is placed in front of a light source," she explains.

"The object would be invisible for your eye if the light rays are sent around the object to avoid scattering, and are accelerated along these curved paths to reach your eye undistinguishable from direct straight beams exiting the source, when the object is absent."

"You would see the light source directly through the object," said Semouchkina. "This effect could be achieved if we surround the object by a shell with a specific distribution of such material parameters as permittivity and permeability."

She and her collaborators at the Pennsylvania State University, where she is also an adjunct professor, designed a nonmetallic "invisibility cloak" that uses concentric arrays of identical glass resonators made of chalcogenide glass, a type of dielectric material--that is, one that does not conduct electricity.

In computer simulations, the cloak made objects hit by infrared waves--approximately one micron, or one-millionth of a meter long--disappear from view.

The potential practical applications of the work could be dramatic, for example, in the military, such as "making objects invisible to radar," she said, as well as in intelligence operations "to conceal people or objects."

Furthermore, "shielding objects from electromagnetic irradiation is also very important," she said, adding, "for sure, the gaming industry could use it in new types of toys."

Multi-resonator structures comprising Semouchkina's invisibility cloak belong to "metamaterials"--artificial materials with properties that do not exist in nature--since they can refract light by unusual ways. In particular, the "spokes" of tiny glass resonators accelerate light waves around the object making it invisible.

Until recently, there were no materials available with the relative permeability values between zero and one, which are necessary for the invisibility cloak to bend and accelerate light beams, she said. However, metamaterials, which were predicted more than 40 years ago by the Russian scientist Victor Veselago, and first implemented in 2000 by Pendry from Imperial College, London, in collaboration with David R. Smith from Duke University, now make it possible, she said.

Metamaterials use lattices of resonators, instead of atoms or molecules of natural materials, and provide for a broad range of relative permittivity and permeability including zero and negative values in the vicinity of the resonance frequency, she said. Metamaterials were listed as one of the top three physics discoveries of the decade by the American Physical Society.

"Metamaterials were initially made of metallic split ring resonators and wire arrays that limited both their isotropy (uniformity in all directions) and frequency range," Semouchkina said. "Depending on the size of split ring resonators, they could operate basically at microwaves and millimeter (mm) waves."

Semouchkina and colleagues recently reported on their research in the journal Applied Physics Letters, published by the American Institute of Physics. Her co-authors were Douglas Werner and Carlo Pantano of Penn State and George Semouchkin, who teaches at Michigan Tech and has an adjunct position with Penn State.

The National Science Foundation (NSF) is funding her research on dielectric metamaterials and the team's applications with a $318,520 award, but she plans to apply for an additional grant to conduct specific studies into invisibility cloak structures.

Semouchkina, who received her master's degree in electrical engineering and her doctorate in physics and mathematics from Tomsk State University in her native Russia, has lived in the United States for 13 years, and has been a U.S. citizen since 2005. She also earned her second doctorate in materials in 2001 from Penn State.

There, "horn" antennas transmit and receive microwaves with wavelengths up to several centimeters, that is, more than 10,000 times longer than in the infrared range. They are cloaking metal cylinders two to three inches in diameter and three to four inches high with a shell comprised of mm-sized ceramic resonators, she said.

"We want to move experiments to higher frequencies and smaller wavelengths," she said, adding: "The most exciting applications will be at the frequencies of visible light."