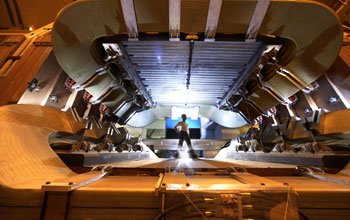 Using data from experiments performed in 2010 at the Large Hadron Collider (LHC), the world's largest particle accelerator near Geneva, Switzerland, scientists are studying rare particle decays that could explain why the universe has more matter than antimatter.

Led by Sheldon Stone, a physicist at Syracuse University, a group of scientists recently published their first observations of two different decays of "strange B" mesons.

Strange B mesons and their antimatter partners, known as B-bar, are among a very select group of particle pairs that enable direct study of the properties of matter and antimatter. Scientists are interested in them because the difference between the decay properties of a B meson compared to those of the corresponding B-bar could provide clues about the current composition of the universe, which consists almost entirely of matter and no antimatter.

The researchers' findings appear in two papers in the March 28 issue of Physics Letters B.

The experiment, called LHCb, is one of six LHC experiments currently being conducted at the European Organization for Nuclear Research, or CERN.

"We know when the universe formed from the big bang, it had just as much matter as antimatter, but we live in a world predominantly made of matter," said Stone. "Therefore, there had to be different properties in the decaying of both in order to end up with a surplus of matter."

With support from many sources including the National Science Foundation (NSF), Stone and his colleagues hope B meson can provide clues as to why these decays are different for matter and antimatter.

Syracuse has a detailed announcement of the researcher's observations on its website.

An antimatter particle is almost the same as a normal one, except the charge is opposite. The antimatter concept applies to relatively tiny things, like subatomic particles such as protons, but can also apply to bigger stuff like whole atoms of hydrogen or helium.

For example, the antiparticle of a proton, called an "antiproton," is the same as a proton except it has a negative charge, whereas a proton's charge is positive. Similarly, antihelium is like helium, but is composed entirely of antiparticles: Two antiprotons, two antineutrons and two positrons, which are the opposite of electrons.

A neutron is a subatomic particle with no net electric charge, so antineutrons may sound counterintuitive. After all, what is the opposite of no charge? The trick here is that neutrons have no "net" charge. Actually, they are made up of smaller charged particles, called quarks, but all of the charges add up to zero. So, taking the opposite of all of those charges still adds up to zero net charge, resulting in an antineutron.

Many people are familiar with protons, neutrons and electrons, but there are many more different types of subatomic particles.

Mesons and other exotic particles have remained mysterious because, compared to protons, neutrons and electrons, they are very unstable. The stable particles that make up matter can stick around for seconds, minutes or even years, while mesons exist for just fractions of a second.

When mesons "decay," they actually transform into something else. Scientists think studying these different decays and their properties will reveal the fundamental forces and symmetries of nature.

Although B mesons don't seem to occur naturally today, they were common in the aftermath of the big bang. Researchers are interested in them because they exhibit what physicists call "CP violation" (i.e. they don't follow the same laws as their opposite states of matter). They violate something called CP symmetry.

The general idea behind CP symmetry--C stands for charge conjugation and P stands for parity--is that even though matter and antimatter are opposites they are equal, so the same basic rules of behavior should apply. The fact that we live in a world with more matter than antimatter is clear evidence that this isn't true, making CP violation one of the greatest unsolved problems in physics.

Studying what we can't see

To figure out what something is made of and how it works, many people would take it apart to see if they could figure out what all the pieces do. To take matter apart on atomic and subatomic levels, scientists and engineers constructed the LHC, the most complex and highest energy accelerator ever built.

Experiments at the LHC face numerous challenges, one being the fact that many atomic and subatomic particles decay very quickly. For this reason, researchers must be able to carefully track the movement and changes of components through both space and time.

In addition, when researchers break apart subatomic particles, the pieces they can "see" aren't necessarily the pieces originally present when the particle was formed.

For example, imagine trying to figure out how to make concrete, a common material used to build many structures. After taking the concrete and smashing it, one would be able to identify a number of key ingredients including cement, sand and rocks. However taking these components, which are undeniably the correct components, mixing them together and pouring the mixture out on the ground, would most definitely not result in concrete. This is because the mixture is missing a critical ingredient--water--that was present at the time the final product was formed.

"We want to figure out the nature of the forces that influence the decay of these [B meson] particles," explained Stone. "These forces exist, but we just don't know what they are. It could help explain why antimatter decays differently than matter."

Hitting the broad side of a barn

These experiments aren't easy, especially when scientists are not sure exactly what they are trying to find. Physicists collect data from millions of LHC proton-proton collisions in order to find each B meson. This much data even comes with its own unit of measurement.

According to Purdue University, physicists there are credited with using the word "barn" as a unit of measurement. As the story is told, researchers during wartime began to use the name to describe the size of a uranium nucleus, which was "as big as a barn."

Researchers at the LHC measure data in inverse picobarns or inverse femtobarns. These may sound tiny, but the inverse part is essential. The inverse of a tiny number is actually a huge number.

The units describe the number of collision events in a unit of area over time. For the two Physics Letters papers, researchers poured over sample sizes of 20 or 33 inverse picobarns. Since the LHC creates millions of collisions per second over the course of days or even months, this represents a colossal amount of data.

It takes a village

In addition to the detailed analysis that resulted in these two papers, the scientists and students in the Syracuse group are involved with many aspects of the LHCb experiment. They help run the experiment and monitor experimental hardware including the LHCb trigger.

Due to the limitations in computing power, none of the LHC experiments can record all the data that comes from a detector. Hardware and software in LHCb, collectively called the LHCb trigger, must quickly decide which collisions should be saved for further analysis. The Syracuse team creates software that monitors the LHCb trigger. LHCb keeps 2000 out of approximately 20 million events each second.

An experiment of this magnitude requires a lot of manpower. Led by Stone, approximately 15 scientists from Syracuse, including graduate and undergraduate students, participate in the LHCb experiment. The total LHCb collaboration includes about 750 scientists from 15 countries.

"The synergy that occurs when leading scientists from around the world, including researchers from U.S. institutions, is important to the advancement of our knowledge," explained Moishe Pripstein, program director for the Elementary Particle Physics program in the Physics Divisionat NSF.

The initial observations of the LHCb group detailed in Physics Letters B also set the stage for future studies by providing new tools for use in subsequent experiments. Stone and colleagues think the potential for discovery is high: "LHCb will continue to push the envelope--to find the manifestations of new forces or states of nature using the decays of B mesons," he said.

"We look forward to more discoveries from the LHC that will transform our understanding of the universe," said Pripstein.