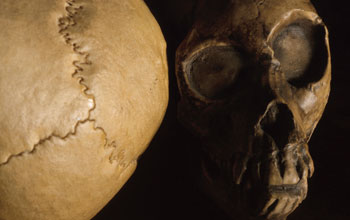 Someday a future intelligent organism could sweep away a million years of dust and find the bones of a Homo sapien and wonder what he was.

Further research would show Homo sapiens walked upright, lived in communities and buried their dead. But this future intelligent organism might be faced with an old puzzle--determining where Homo sapiens came from.

"If their cognitive world induced them to ask the same sort of questions, the problems we pointed up would still be there," said Bernard Wood, professor of human origins and of human evolutionary anatomy at George Washington University in Washington, D.C.

Wood was speaking of a recent paper published in the journal Nature in which he and physical anthropologist Terry Harrison of New York University argued it's not so easy to determine whether relatively new fossil finds are early members of the human evolutionary family or prehistoric apes.

Wood and Harrison write, "All the organisms alive today are the terminal twigs of the crown of the tree of life." Though not mentioning it directly, they hint that one day even Homo sapiens--anatomically modern humans--might disappear, thus leaving some future intelligent organism to determine Homo sapiens place in the tree of life. But not only that, such a disappearance might leave these future organisms with the same species classification problems that exist today.

The paper, "The Evolutionary Context of the First Hominins," is a thought experiment. Its authors think through the various consequences of placing recently discovered fossils Orrorin tugenensis, Sahelanthropus tchadensis and Ardipithecus ramidus so firmly on the human branch of the evolutionary tree.

The fossils may not be related to Homo sapiens at all, despite their discoverers' claims. Instead, they may be extinct, distant cousins, with a relationship to modern humans much like that of living chimpanzees, gorillas or orangutans, say Wood and Harrison.

"Our null hypothesis is that the more morphology that is shared, the closer the relationship between the organisms," said Wood, explaining the default position generally accepted by scientists when classifying species.

Evolutionary biologists and physical anthropologists traditionally use a species' physical characteristics--or morphology--to determine which groups of organisms are most closely related to one another. But, in some cases, common physical traits may not indicate a common evolutionary history.

The central theme here is something called homoplasy, a character shared by a set of species but not present in a common ancestor. A good example is the evolution of the eye, which originated independently in many different species.

Sometimes these homoplasies and/or common morphologies may mean common ancestry and sometimes they may not.

Wood cautions that if morphology or homoplasy can be shared for reasons other than a recent common ancestor, such as common environmental pressures, then anthropologists are stumped.

"Supposing two distantly related, fruit-eating apes were living at the same time and facing the consequences of the same climate change," Wood explained. "Then suppose this climate change resulted in the forest's fruiting trees being replaced by open woodland and increased grassland, forcing the distantly related apes to adapt to eating tough tubers instead of soft fruit.

Instead they would have gotten it from a common environmental event and convergent evolution, developing the same or similar biological traits in unrelated or distantly related lineages.

In the case of Ardipithecus and other recently discovered fossils, traits shared in common with Homo sapiens such as bipedal locomotion or small canine teeth may indicate a close relationship with anatomically modern humans or, as Wood and Harrison suggest, may be the result of convergent evolution.

"Homoplasy makes it unwise to rely on just a few morphological similarities to declare fossils are early hominins," Wood contends.

In an example from more than 30 years ago, scientists classified a 12 million-year-old Asian fossil named Ramapithecus punjabicus as a likely human ancestor. Now, after further research, Ramapithecus is thought to belong to one or more species of extinct primates, and perhaps most accurately regarded as a distant cousin of modern orangutans.

In another example, a species called Oreopithecus bambolii, represented by a cache of 7 to 8 million-year-old fossils found at sites in Tuscany and Sardinia, Italy, and first described nearly 140 years ago, was thought to be a potential early human ancestor because of skeletal similarities with modern humans. Research suggested Oreopithecus had many anatomical similarities with the group of organisms that includes great apes and modern humans. It also had characteristics generally considered to be uniquely associated with bipedal behavior.

But only after additional discoveries by a Swiss paleontologist in the late 1950s, researchers began to rethink Oreopithecus' initial classification. Scientists still debate its precise position on the evolutionary tree and whether it is more accurately regarded as a descendant of a European ape or as an African anthropoid.

"We emphasize that we are not claiming that the presence of homoplasy in and around the hominin clad doom(s) all efforts to recover evolutionary relationships to failure," the researchers write. They take the same stance regarding other methodological and analytical limitations that arise when investigating evolutionary relatedness.

They stress that their paper doesn't claim Orrorin, Sahelanthropus and Ardipithecus are not early human ancestors. But they encourage paleoanthropologists to acknowledge the potential shortcomings of their data when it comes to generating hypotheses about relationships.

For now, they hope paleoanthropologists will heed the warning and leave an accurate record that perhaps some future intelligent organism will be able to decipher.

The National Science Foundation funds Wood's and Harrison's research through its Division of Behavioral and Cognitive Sciences.