Future Fuels for Everyone Powered by the Sun

New scheme would use only sunlight, air and water to supply energy for cars, laptops, GPS systems 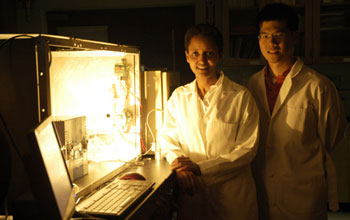 Sossina Haile and William Chueh next to the benchtop thermochemical reactor.

"At the California Institute of Technology, they're developing a way to turn sunlight and water into fuel for our cars"--President Barack Obama, Jan. 25, 2011.

The sun is the Earth's primary energy source and harnessing its abundant light is the Holy Grail of renewable energy.

Now, a group of scientists has demonstrated a new way to use sunlight, water (H2O) and carbon dioxide (CO2)--some of the cheapest and most commonplace stuff on Earth--to make unlimited amounts of fuel to power almost anything, anywhere.

The method uses concentrated heat from the sun to convert water and CO2 into hydrogen (H2) or carbon monoxide (CO). Large amounts of these two gases could be combined to make liquid fuel that fits into America's existing energy economy.

"Alternatively, you could use the H2 and CO to make methane (natural gas) for a gas-fired electricity generator," said Sossina Haile, professor of materials science and of chemical engineering at California Institute of Technology in Pasadena. "Or, because the fuels we produce are so pure, they could be easily used to run fuel cells, which generate power very efficiently."

The researchers say one of the most exciting things about the discovery is its versatility. "We are not dictating to the user what the energy infrastructure should be," Haile said. "We are making solar energy easy to use by putting it into a form that our industry is used to seeing and making it available on demand."

Scientists have long known how to convert H2O and CO2 into H2 and CO. But to do it cheaply and efficiently enough to make the process affordable on a wide scale has been an issue. Part of the problem was the need for expensive and rare elements, such as platinum or iridium, to act as catalysts that encourage the conversion to happen.

So Haile and her team took a novel approach; they tried ceria, a material used in the walls of self-cleaning ovens. Ceria is the oxidized or "rust" form of the element cerium, which is more abundant, and therefore cheaper, than other metals that could do the same job.

The new method requires two steps, the first at high temperature using concentrated heat from the sun (about 3,000 degrees Fahrenheit), and the second at a much lower temperature.

Haile describes the process this way: "If we heat ceria up, the material naturally releases some oxygen from its structure. If we then cool it back down, those oxygen vacancies want to be refilled. In other words, the ceria exhales oxygen at high temperature and then inhales it back when the temperature is lowered."

To make fuel, the second step requires the presence of H2O and CO2 gases. "At lower temperatures, the cerium, the hydrogen and the carbon all want the oxygen, but the cerium wants it most," Haile said. "So the oxygen vacancies in the ceria are filled by stripping oxygen from H2O and CO2, leaving H2 and CO."

Haile and her Caltech team, supported by an award from the National Science Foundation, recently published a paper describing the breakthrough in the journal Science. For this project, they collaborated with researchers led by Aldo Steinfeld, a renewable energy technology professor at the Swiss Federal Institute of Technology, also called ETH Zürich, in Switzerland. Steinfeld also leads the Solar Technology Laboratory at the Paul Scherrer Institute in Switzerland.

Two pieces of equipment were needed for the experiment. The first piece, built at Caltech, is a reactor "just a bit smaller than a gallon jug," Haile said. The reactor is basically a cylindrical container lined with ceria that has input and output lines for the gases.

The second piece is a solar concentrator, which is the most difficult part to build. The concentrator is basically a set of giant curved mirrors that gather sunlight from a wide area. For this experiment, the researchers were able to use an existing solar concentrator located at the Paul Scherrer Institute.

The Caltech scientists took their reactor to Switzerland and attached it to the bottom of the concentrator, allowing the sunlight to heat up the ceria inside. Then they piped steam and CO2 into the reactor and measured the H2 and CO gases flowing out.

How far reaching could this new technology be and how much oil, gas or coal could it replace?

"The abundance of cerium means that this approach could have a significant impact on our national energy budget," Haile ssaid. Because cerium is 100,000 times more abundant than the precious metal platinum, she said, the cost would be many orders of magnitude smaller.

For this experiment, the efficiency of the reactor at converting sunlight to usable energy measured just under 1 percent, which Haile said is comparable to other methods. However, this was a first cut, aimed at simply proving that the process is practical and could be done economically.

Before bringing the technology to market, Haile said, the reactor design needs to be much tighter to get better efficiency.

"As a second step, it will be important to develop materials with even better characteristics than ceria," she added.

"Ideally, one wants a material with a smaller temperature swing required as this will also increase efficiency," Haile said. "In addition, if both the high and low temperatures can be lowered, the overall system lifetime will be improved. Better materials could result in a better process."