Journey to the Center of the Amazon 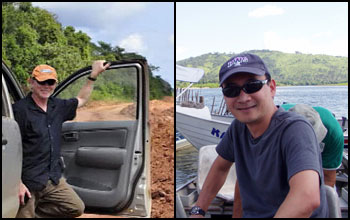 
Robert Walker and Eugenio Arima ventured into the Amazon to investigate the status of logging.

The Amazon Rainforest is the largest tropical rainforest on Earth and home to millions of species. Yet, deforestation, or the clearing of forested areas, poses a threat to the livelihood of the forest.

"The prime global consequence of Amazonian deforestation is loss of the world's greatest repository of biodiversity," said Robert Walker, a Geography professor at Michigan State University. "The forest also provides for significant carbon storage, and its conversion intensifies global warming. On a continental scale, loss of the Amazonian forest impacts climate with drier conditions."

Although researches use satellite imagery to track deforestation, it is unclear as to who is causing the deforestation, under what circumstances and the relationship of deforestation to road-building activities.

The best way to find answers was to visit the Amazon and gather information about the loggers and road systems first-hand, said Walker. With support from the National Science Foundation (NSF), Walker and project leader Eugenio Arima, who at the time was an assistant professor of Environmental Studies at Hobart William and Smith Colleges, and Ritaumaria Pereira, a doctoral candidate in Geography at Michigan State University, embarked on a journey to discover the causes of deforestation from the loggers themselves.

The team traversed the "Transamazon Highway," one of the longest-running highways in Brazil, which spans deep into the Amazon Rainforest.

Going in, the team knew environmental law enforcement by the Brazilian government and the global recession had reduced deforestation particularly during the last five years and many logging towns had shut down or significantly downsized.

However, Walker noted "the world's growing appetite for Brazilian agricultural commodities, such as ethanol, soy products and beef," still require clearing the forest. These commodities need space, and the loggers are around to provide it, he said.

The loggers construct roads and push through the forests. Moreover, the roads inspire settlements and further agricultural production.

His goal was to understanding how road networks evolve with respect to human behavior and social context. Walker explained that conservation policies and practices can be developed to improve forest sustainability while being sensitive to the land and the people who live there.

Into the depths of the Amazon

The team flew west from the town of São Félix do Xingu, just west of the Xingu River, to Santarém, the starting point of their journey along the Western Transamazon Highway.

"The Xingu River is a place that's quite amazing because it had been very difficult to have access. It had tribes that had opted to remain outside of Brazilian culture well into the 20th century," said Walker. "Our ostensible effort was to understand how loggers built penetration roads into this particular region, which is called Terra do Meio, is located just west of the Xingu River."

Finding the loggers would not be an easy task. However, the Kayapó Indians provided key information to Walker and the team on the loggers whereabouts. The Kayapó number about six to seven thousand and reside in the lower Amazon basin. They once allowed the loggers on their land, but after logging damaged it and led to tribal conflict, the Kayapó became set on protecting the environment and were helpful to the team's interest in rainforest conservation.

"It's very difficult to have an opportunity to encounter this particular tribe or any tribe now in the Amazon given there's been a lot of abuse since colonial times and before," said Walker. "The Kayapó were very helpful because a lot of the logging that had occurred in the region occurred in their historic territories. We got a lot of good scientific data and at the same time I got to have a cultural experience."

The tribe even mistook Walker forJames Cameron, director of the Hollywood blockbuster Avatar. Cameron has special significance to the Kayapó since he declared solidarity with the group's efforts to stop the damming of the Xingu River.

"Cameron had a statement that the  Kayapó represented the best of native peoples, and that they had been an inspiration to him in his film [Avatar]," explained Walker.

With newly acquired information from the Kayapó, the team continued their travels towards the Transamazon highway. At Santarém they rented a jeep and began their 850 mile journey westward along the Transamazon Highway to its terminus, the town of Labrea.

During this nine-day trip along the road, the team encountered breath-taking wildlife and forests, an active goldmine and various towns and settlements. "The road itself was absolutely wild," said Walker, who explained that no one had ever previously completed the entire route. "Along the side of the road it was just mile upon mile of forest."

Upon leaving the town of Jacareacanga, they found themselves on roads surrounded by swamps. Suddenly, Eugenio, now an assistant professor of Geography and the Environment at University of Texas at Austin, shouted, "Macaws!" and the team found themselves gazing upon a multitude of the rare blue macaw.

"It was literally a macaw city. They had not seen many human beings so they started playing with us--they would fly and buzz us and they'd be literally 10 feet overhead," said Walker. "It was one of those magical nature moments."

It turns out that the Buriti palm trees in the swamp were roosting grounds for the macaws. When the trees died, the macaws hollowed out in the middle so they could nest there.

As the team continued westward, they still had not met any loggers. But, they did visit an active goldmine hidden in the deep forest.

"It was a very long, hard drive to get to the goldmine," said Walker. Frankly, they're not very pleasant places, nor are they safe. "There's every imaginable form of commodity and human degradation. It was a rough place."

Malaria and the risk of violence also posed threats. Walker noted that about 60 percent of the people had malaria in the mine. Initially the miners were skeptical of the team and did not welcome them at the mine, but soon they were given access. Walker observed the barren landscape of the mine that had been reduced to dry and sandy crevices in the earth--a foreshadowing of what the rainforest might look like if it was completely cut down.

Soon after the encounter of the mine, the team arrived at the Aripunanã River where they spotted a large truck carrying sawn wood. It was evidence of logging somewhere nearby. On the other side of the river, numerous logging trucks appeared coming from the direction of the frontier town of Vila Santo Antonio Matupi.

The next step was to try and interview the loggers--not an easy task since loggers are often armed and not interested in talking to strangers. The team had an encounter with a logger and his men, who coerced them off a piece of rainforest he had claimed for himself. Thus, the team was not able to get any interviews from the loggers during the trip. Alternative strategies for interviewing loggers would have to be developed, but in the meantime, the team continued to the end of the Transamazon Highway.

Almost to the end destination of Labrea, Walker explained that "the last leg was nearly impassable. It was so wet, for 200 km we didn't see a single vehicle on the road, except the road maintenance crews. There are lots of jaguars, so if you get stuck on the road, you have to sleep with all of your windows up or a cat is going to cause you problems."

Luckily, the team did not meet any jaguars and despite these challenges, they safely reached the end of the Transamazon Highway.

The team's trip provided significant findings about deforestation patterns, road networks and where logging is taking place. Significantly, they located the logging frontier and also identified the parties involved in agricultural development, including settlers, ranchers and local governments.

The team determined certain patterns of fragmentation that are more consistent and sustainable than others. One pattern that they believe is potentially sustainable is called a "fishbone pattern" that resembles the bone structure of a fish. In this pattern, the spaces of forest between each road or "bone" allows space for animal movement and adequate ecological conditions, as well as corridors connecting different ecosystems.

"Fragmentation can be directed by government plan, as has been the case in colonization frontiers," explained Walker. "Then, logging occurs as part and a parcel of the land clearing process, and not as a rogue activity."

Therefore, agriculture and development can sustainably coexist with the rainforest if properly planned.

"If you have an orderly sort of fragmentation of the forest that maintains ecological productivity, that is, if you preserve a forest's spatial order in an intelligent manner, then species can migrate, whether they're animal or plant, and you maintain biodiversity for that reason," said Walker.

In the future, Walker and the team anticipate additional trips to the Amazon to continue their research. They also hope to speak to loggers and find learn additional information about the industry.

"Our next steps are to gather some final pieces of technical data on logging operations that will enable us to build computer models that predict their fragmentation impacts," said Walker. "We plan to return this next summer for additional field work. We will then have visited every major fragmentation frontier in the basin."

Yet, the team observed that in the midst of the logging and deforestation, the people of the rainforest struggle daily in impoverished conditions.

"It's really important to remember that there's not just an environmental struggle here," said Walker. "There are battles on a personal level day in and day out by people who live here largely because of the brutal conditions of poverty that impact them."

There is a point at which the rainforest stops being stable and assumes a new and detrimental state.  Walker refers to this as the "tipping point." The team's research is meant to prevent the Amazon from "tipping over" and Walker says, "The battle for the 'tipping point' can only be won if the battle against poverty and the battle for the living conditions of the people here are also won."