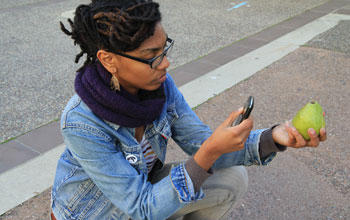 A photo taken for a paper prototype video produced to demonstrate the Forage City app.

In nearly 20 years, Youth Radio has grown from a small radio skills training program in Berkeley, Calif. to a national organization with bureaus in Los Angeles, Atlanta and Washington, D.C. The program has helped young people develop marketable behind-the-scenes and on-air skills, winning it the most coveted awards in journalism.

Now it's taking on another venture: app development.

Youth Radio was one of the 2010 winners of the MacArthur Foundation's Digital Media Learning Competition.  The award provided a key financial investment to start the Mobile Action Lab. Based in Oakland, Calif. and funded by the National Science Foundation, Mobile Action Lab officially launched in September of the same year.

"Youth Radio launched its Mobile Action Lab to expand our science and tech offerings for youth and to leverage the potential of mobile platforms to create high-impact digital projects," said Elisabeth "Lissa" Soep, Senior Producer and Research Director of Mobile Action Lab. "Based on challenges in public education, transformations in media worlds and opportunities to spark STEM learning, Youth Radio decided to capitalize on the talent of its young people and its network of professional colleagues by teaching young people to create new technology platforms. Apps increasingly determine who knows what, how news travels and what makes change possible."

According to Soep, the Mobile Action Lab strives to "lower barriers that have traditionally blocked teens and young adults from learning to develop innovative tech platforms, which is especially significant for those who haven't had access to excellent, engaging STEM teaching in schools."

Soep also explained how Mobile Action Lab provides a network between young people, especially low income youth and youth of color, with tech developers, engineers, and entrepreneurs; and prepares all graduates of Mobile Action Lab with the skill-sets to "configure design-development teams and play key roles in future tech-based projects--from conception through research, design and development, testing, launch and analysis."

Although the specific development process differs for each app, in all of the projects, young people are deeply involved, from brainstorming the app's concept to marketing the app and planning its distribution. After the general app concept has been defined, young people recruit a team to work on the app, research the app market and types of potential users, define and diagram the functionality of the app, and design the app's "look and feel." In quarterly developer workshops, young people learn how to program and code simple apps, which sometimes serve as prototypes for fully developed products, using the Google App Inventor.

"Through hands-on workshops, we're not just theorizing about app development--we're actually learning the coding side," said Asha Richardson, a project associate at Mobile Action Lab. "That's something not enough people know--what programming is--not enough schools talk about it. App Inventor uses coding blocks, and you have to know which parts go where in order to make your app do what you want it to do. You move the coding blocks around, then throw it on the phone, see if it works, fix it, and then try again."

Austin De Rubira explained how the principles he learned at this workshop serve an integral role in Mobile Action Lab. One of these principles is the "iterative development process."

"It's basically creating something through trial and error--you try something, and if it doesn't work, you fix it until it does work," explained De Rubira, an intern at Mobile Action Lab. "That was a really hands-on definition of the iterative development process. It definitely clicked in my mind and it really made a lot of sense to me. Iterative development is a very effective way to work on apps, and that's how I've been thinking about our entire process with the Mobile Action Lab."

Once the coding process is complete, the apps are tested to make sure they function as designed and the final product is user-friendly. Young people research potential distribution partners and co-create promotion plans to market their product.

De Rubira described the tediousness and attention to detail required of this process. "I've learned that an app, if any part of it isn't good, it's not going to be a good app. If it doesn't have good graphics, you won't be interested," said De Rubira. "If it's a bad concept, obviously that won't work. The interface is really important too. If it's not intuitive to work with, the functionality has to be such that--in addition to being fun to play with, it has to do something that'll make you interested in making you come back."

For each of these app projects, Mobile Action Lab will work with students to track statistics relating to the apps usage, such as numbers of installs, new and returning visitors, page views and the duration of time spent using the app. Additional app development is underway, including an app that strives to increase communication and understanding between youth and the police, and educate youth about their rights and responsibilities as they relate to the legal system.

Forage City: The goal of Forage City is to create an app that mediates the process of gathering and redistributing excess food from backyard trees to people in need. This way, food that would otherwise rot and go to waste, can be fed to the needy. The app uses crowdsourcing, which enables the public to collectively complete specific tasks that traditionally may have been performed by specific employers or contractors. Users include residents and non-profit organizations, such as homeless shelters, foodbanks, youth organizations and afterschool programs across the United States.

"The goal is to improve food equity by enabling users to have access to fresh produce that is lacking in poor communities," explained Soep.

The Forage City app is being developed in collaboration with Forage Oakland's Asiya Wadud and designers from UC Berkeley's Information School. This app will be accessed through the Web and smart phones and the Beta is anticipated for June 2011.

VoxPop: Soep explained that the goal of VoxPop is to provide mobile and interactive radio that is "glocal" (global and local). It enables "users to share stories and report news from around the world, including 'hot spots,' such as Japan and Egypt, and regions that often get partial and/or distorted treatment in mainstream media," said Soep. VoxPop is being developed in collaboration with Youth Speaks, the nation's leading producer and presenter of youth spoken word, and developers from Stanford University. This app will be accessed through the iTunes store. The Beta is anticipated for July 2011.

All Day Play: All Day Play is Youth Radio's online radio station and music site that streams hip-hop/eclectic music, including music chosen by some of the area's hottest DJs, new and established artists and Youth Radio interns and graduates who are pursuing music careers. The initial Beta version of the app was created at one of Mobile Action Lab's "App Inventor" workshops and is anticipated to be released in May 2011. It will be accessible through the Android marketplace.

Another one of the goals of Mobile Action Lab is to show young people that STEM subjects can be fun to study and can lead to career paths that are exciting and fulfilling, as well as practical.

"I hope we can get more young people excited about coding, math, designing and science," said Richardson, who explained why she thought that many young people fail to find these subjects interesting or appealing.

"It doesn't look as glorifying or amazing to be a computer scientist as it would to be a lawyer or doctor," said Richardson. "The stereotype is people in cubicles who aren't very social and lead awkward lifestyles. That's how it's presented."

These stereotypes may be further generated because some young people might not be fully aware of what issues are addressed by different scientific fields. For instance, Richardson noted that for a long time, she didn't know what was meant by the term "engineering." "You weren't shown that in school," she said.

By contrast, the Mobile Action Lab engages young people in hands-on activities that address relevant, real-world issues. In addition to teaching young people the technical side of app programming, these activities teach them scientific careers that involve applying scientific, math and business skills outside the lab may be exciting.

"We're meeting people in the field, developers and designers. And they're outgoing people! They like to talk about their work and they travel ... they get to do all these amazing things that you wouldn't think a computer scientist does," said Richardson. "It gives you a face to counteract the images out there."

"We're not just teaching science and math. We're teaching how you develop something, how you sell it--even if it's free, we want a lot of people to use it," said Richardson about the app development process. "So now, even when I'm sitting down with something I've purchased, I look at how it works and why I like it. It makes us better designers of what we want to do. Whenever I download new apps, I'm looking at the color schemes, how many buttons it has, how it is actually working and whether it's intuitive."

"It makes me a more critical thinker all around," said Richardson.