The Search Serpent: The Next Wave in Robotics

Researchers are designing snake robots that can navigate a variety of terrains, surmount obstacles in their way and function in range of conditions 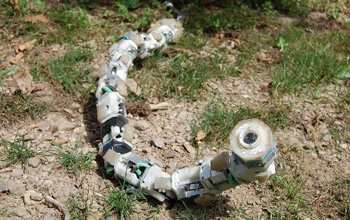 Howie Choset has developed a snake robot that moves without the aid of a fixed base.

How does one design a robot that maneuvers in three dimensions and navigates all manner of terrain? Those are the main challenges that Howie Choset at Carnegie Mellon University is attempting to tackle.

Most modern robots perform functions from a fixed or mobile base. Mobile bases extend a robot's reach further than a fixed base; however, most current robot designs fail to help a robot maneuver through a three-dimensional landscape.

For a robot to navigate a variety of terrains, ideally it would use a sensor or laser to create a topographical map of space to plan its path, as we use our eyes and other senses to navigate. Also, it would possess internal degrees of freedom to allow for a number of different gaits to surmount obstacles in its path. A snake robot has numerous degrees of freedom, which have to be coordinated before the robot can move.

Choset partnered in a National Science Foundation (NSF) grant with Annette "Peko" Hossoi from MIT to design a robot that not only understands how to chart its path through any type of terrain, but has many degrees of freedom for motion. Choset believes that an improved understanding of locomotion is vital for mechanisms to operate in challenging terrains.

Choset's previous 1997 NSF CAREER Award, on sensor-based map building for highly articulated robots, established the framework for his current research. Sensor-based exploration allows a robot to enter an unknown environment and build a map to establish its location. The research incorporated the use of ultrasound sensors to plan a path between two points so the robot could explore unobstructed.

"It was a stepping stone towards a series of other problems, which we eventually addressed, that allowed us to arrive at the snake robot we have today," said Choset.

Choset was first exposed to snake robot technologies--and their applications for minimally invasive surgery and search and rescue--as a graduate student at Caltech. His advisor, Joel Burdick, and fellow graduate student, Greg Chirikjian, started a research program on snake robots. While at Caltech, Choset made contributions to the field, and when he became a faculty member at Carnegie Mellon, he brought the research program with him.

Choset's current snake robot is highly maneuverable, flexible and can utilize a variety of motions to go forward. Those qualities allow for the robot to move through complex environments that may be cluttered with obstacles and debris. The snake robots also can thread through tightly packed spaces and difficult locations that people and conventional machinery cannot.

In addition to the variety of locomotions, Choset added sensors, a camera and a light so that the robotic snake can function in a range of conditions.

"The kind of search and rescue that I'm interested in is in confined spaces, such as a collapsed building or mine. I hope that someday my robots will be capable of traversing those territories and my robot would be a tool that rescue workers would carry with them," said Choset.

CardioArm is controlled using a computer and joystick, and during a heart surgery, it enters through a single point in the chest and wraps around the heart until it reaches the problem area. Its main purpose is to seek out and remove damaged tissue, and because it is both flexible and rigid, it may prove extremely effective for this type of procedure.

What also made the surgery unique was that a cardiologist performed the procedure. In the past, only surgeons would have done that type of procedure, but the surgical snake robot allowed someone with less training and fewer resources to successfully complete the epicardial mapping.

Beyond relying on sensors to navigate through space, a robot needs to move freely through challenging terrain. Choset and his research group are developing a variety of gaits to allow the snake robot to surmount any obstacle.

"One of the greatest contributions that my research group has made has been in defining gaits," said Choset. "A gait is kind of a motion controller--when a horse trots, its ankles, knees and hips are doing some kind of motion that propels it forward. By some amount of velocity, when it gallops, it still has an internal motion and the internal motion that it undergoes is completely different for a different application like going forward and jumping over obstacles."

Snake robots differ from conventional robots because they move without the aid of a fixed base. Essentially, they either rely on a moving tread or skin, or their internal shape changes to propel them forward. Choset's snake robot relies exclusively on internal shape changes to move. It is the internal movements and joint angles that have allowed Choset's research group to develop a number of different gaits.

Choset and his colleagues chose to adapt several biological snake gaits for their robot so that it may tackle a variety of different environments. The main gait allows the snake to move forward in a linear progression, but that gait can also climb obstacles as well. Sidewinding is a biological gait that causes the snake robot to move sideways and have a wider footprint, allowing the snake to move over large obstacles. Finally, the most common form of locomotion in snakes is lateral undulation, which Choset and his colleagues borrowed so that an aquatic version of the robot could swim.

"My robot can swim in a moat, breach a fence, climb a flagpole, crawl through grass, ride on top of bushes. There's a whole bunch of things it can do," said Choset.

Choset recently received an additional NSF grant to develop a project to use robotic exploration in the Mersa/Wadi Gawasis archaeological sites in Hurghada, Egypt. This will involve a long-term collaboration with Kathryn Bard of Boston University and Mohamed Abd El-Maguid, marine archaeologist at the Egyptian Supreme Council of Antiquities, who will use robots to inspect regions of archaeological interest that are too dangerous for people to enter. Many of the man-made caves the archaeologists wish to explore were used to store pieces of ancient ships, which may be of historical significance.

Choset and his colleagues will assist the archaeologists by sending the snake robot into the caves to identify and retrieve artifacts. The snake robots will be used as tools, which archaeologists will use to not only explore fragile historical sites, but minimize any disturbance.

While the robots explore the sites, they will construct a map, providing a three-dimensional view of the location. The map will allow archaeologists and the general public to virtually visit a location of great interest, and potentially open robotics for a new application.