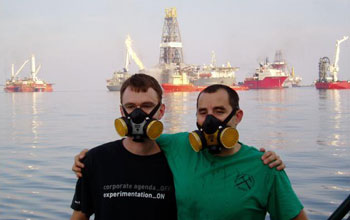 John Kessler and David Valentine in front of the Deepwater Horizon Gulf oil spill in June 2010.

Methane, a potent greenhouse gas, seeps naturally from the seafloor in many places around the planet, including in the Gulf of Mexico.

Scientists know that some of the Gulf's naturally released methane is eaten by microbes, but researchers are still trying to determine how much of this released methane ever reaches the atmosphere, where it may influence climate. To help better define the relationships between methane seeps and climate change, we had previously conducted many studies of natural methane seeps. However, not all marine methane seeps are natural; significant amounts of methane also seep from unnatural sources, such as oil wells. So when BP's Deepwater Horizon rig exploded in the Gulf of Mexico on April 20, 2010, and the Macondo prospect began releasing hydrocarbons, we suspected that the resulting oil spill would be accompanied by a large methane release.

Indeed, we were right. In fact, so much methane gushed from the well that some of it collected as solid, crystal-like structures--known as clathrate hydrates--in well caps that rig operators used in attempts to seal the well. Unfortunately, those accumulations of methane clathrate hydrate eventually filled the well caps, and thereby prevented them from sealing the well.

In addition, soon after the Deepwater Horizon rig exploded, the U.S. Department of Energy and BP collected measurements indicating that, on a molecule-by-molecule basis, methane was the most abundant material being released from the rig. With the rig spilling 52,700 barrels of oil per day into the Gulf, we now realized it was also releasing far more methane than any other previously studied natural methane seep.

As news of the rig's release of large amounts of methane spread throughout the scientific community and general public, a wave of wild speculation about its ultimate impacts grew.

For example, some people predicted that the methane would gradually and harmlessly rise into the atmosphere. Another prediction was that the methane would remain in the ocean, suffocate marine life and thereby produce large expanses of lifeless ocean (called dead zones). Some people even outlandishly predicted--much to the consternation of many residents of the Gulf coast--that a giant methane bubble would suddenly rise from the bottom of the Gulf and trigger a huge tidal wave.

Unfortunately, however, most speculation about the fate of the methane releases was grounded in baseless conjecture--not on any hard data. Such unsupported speculation reminds us of the famous quote by Lord Kelvin in 1883:

As scientists, we wanted to solve the methane mystery through the traditional scientific method. This would involve first developing an idea, called a hypothesis, based on an initial set of data on released methane and then conducting tests involving more data collection, which would either support or disprove our hypothesis.

Within weeks of the explosion, we received funding from the National Science Foundation (NSF) to investigate the methane component of the oil spill. In June 2010, with only two weeks to prepare, we embarked on our first expedition to the oil spill, investigating methane while aboard a research vessel.

Using that method, we discovered giant horizontal plumes of methane and other gases that were located about two-thirds of a mile below the ocean surface and were about 110 to 220 yards (100 to 200 meters) thick.

The plumes contained concentrations of dissolved methane that were 10,000 to 100,000 times above normal levels, the highest methane concentrations ever documented in ocean waters.

In addition, we tested methane levels in and above the ocean surface in order to determine whether the gas was escaping into the atmosphere. Our results from those tests indicated that Macondo prospect methane was not being emitted to the atmosphere and was staying dissolved and suspended in the deep ocean.

Continuing to track the Gulf's methane levels, we led three additional surveys throughout the Gulf in August, September and October of 2010. Through those surveys, which were supported by the National Oceanic and Atmospheric Administration (NOAA), we sampled 207 unique locations, and measured concentrations of dissolved methane and oxygen in thousands of samples from an area covering 36,000 square miles (about 93,000 square kilometers).

Surprisingly, our analyses of data generated through those later surveys told an entirely unanticipated story: rather than lasting years, as we had hypothesized, the high methane concentrations we had measured in June 2010 had hardly lasted months and were gone by fall 2010. By then, oxygen levels within the plumes had become slightly depleted.

Methane-eating microbes remove oxygen from the water as they breathe. Therefore, if microbes were consuming methane in the plumes, we would expect the plumes' methane and oxygen levels to drop--phenomena that were indeed reflected in the data collected from the plumes in the fall.

So we revised our hypothesis accordingly. We now hypothesized that at some time during the mid-to-late summer of 2010, the vast amounts of methane released from the Deepwater Horizon disaster had been almost entirely consumed by methane-eating microbes.

Putting our new hypothesis to the test

In response to the explosion and resulting releases of huge volumes of methane, the microbial populations seized the day, feasted on the methane releases and experienced large population increases. After ultimately eating themselves out of house and home, the large populations of methane-eating microbes eventually shrank.

So, if not for the presence in the Gulf of pre-explosion baseline populations of methane-eating microbes, the huge volume of methane released by the Deepwater Horizon disaster may have persisted far longer than it did. Because the volume of methane released from the Deepwater Horizon disaster was precedent-setting and had never before been observed, the rapid and mighty microbial response that it triggered had also never before been observed.

We were glad to have this opportunity to lend our expertise to study the oil spill. But we also tried to make a little good come from this disaster and to use it to learn something about how the planet naturally functions. What our research has taught us is that if some of the large stores of methane that are currently buried beneath the sea floor are ever released in large quantities--either due to ocean warming, earthquakes or man-made factors--locally present microbes may at least partially help to reduce the potential influences on climate.

Related Websites
LiveScience.com: Behind the Scenes: How Tiny Microbes Took a Big Bite out of the Deepwater Horizon Oil Spill: http://www.livescience.com/14154-methane-microbes-deepwater-horizon-oil-spill-bts.html