Scientists discover unusual alliances in leks, or groups of males 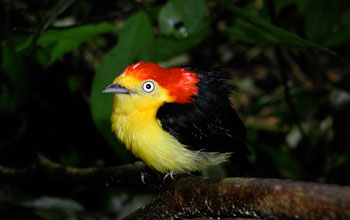 But not every lek's members are competitors, scientists have learned. Some--birds called wire-tailed manakins, residents of tropical forests in the Americas--are cooperators as well as competitors.

"Male vertebrates often form reproductive coalitions to gain access to or to defend females," says Brandt Ryder at the Smithsonian Conservation Biology Institute in Washington, D.C., "and in most contexts they compete for those females."

Wire-tailed manakins, however, are different in that they cooperate, forming alliances for a common cause.

Wire-tailed manakins coordinate their courtship displays. "These displays, and the resulting leks formed," says Ryder, "are a rare example of male cooperation within a lek social system."

This cooperative behavior appears to have evolved twice in the manakin family--in the wire-tailed manakin group, and in another group known as blue-backed manakins, which live in the same tropical forests.

Manakins are a family, the Pipridae, of unique small passerine birds; the Pipridae contains about 60 species, all living in the tropics.

The name "manakin" comes from the Middle Dutch mannekijn, or "little man."

Manakins are found from southern Mexico to northern Argentina, Paraguay, and southern Brazil, and on Trinidad and Tobago.

They're almost exclusively birds of the forests and woodlands. Most live in humid tropical lowlands, with a few in dry forests, river forests, and the subtropical Andes.

The birds feed in the forest understory on small fruits, including berries, and to some degree, on insects.

Since they take fruit in flight--similar to how other birds snatch insects from the air--manakins are believed to have evolved from insect-eating birds.

Females have large territories, on which they feed socially with other birds of their species. Males spend as much as 90 percent of their time at leks, where they display in elaborate courtship rituals, including using their wing feathers to make buzzing and snapping sounds.

"These display coalitions have long been of interest to scientists from an evolutionary standpoint," says Loiselle, "because of the paradox of apparent cooperative behavior in a situation with intense competition."

Loiselle, Ryder and colleagues are conducting a long-term study of wire-tailed manakins at Tiputini Biodiversity Station. Tiputini is located adjacent to the Yasuni Biosphere Reserve in Ecuador.

The scientists locate leks of wire-tailed manakins by searching for and mapping locations of "singing" male manakins along transects in study plots.

The number of territorial males per lek ranges from 4-to-12.

Leks are found in seasonally flooded forests, as well as on "terra firme." The understory vegetation at the leks varies from open to closed, many covered by old tree falls and vine tangles. Most leks are in low-elevation flat areas near streams.

There young male wire-tailed manakins are more likely to maintain their own territories, the scientists discovered, if they have an established partnership with a member of the lek.

As long as it's not a family member.

Gatherings of manakins may have much to tell us about not only tropical birds, but about leks of other species, such as the sharp-tailed grouse of Canadian and U.S. prairies.

Many lekking birds are threatened by habitat loss, whether in prairie or forest.

By knowing how--and where--manakins flourish, says Ryder, "we can learn which areas of the tropical forest need further conservation measures."