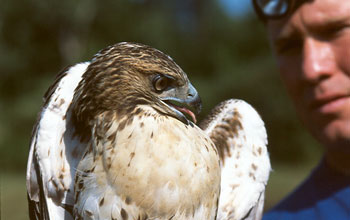 Professor James Hewlett with a red-tailed hawk in hand.

As any resident of upstate New York will tell you, the red-tailed hawk is the most common hawk in North America. Often seen perched on light and telephone poles along major highways, this majestic animal is one of the most widely recognized raptor species.

At the same time, there is relatively little known about the populations of this avian giant, a top predator that can be found from Alaska to Maine, and as far south as Panama.

In 2003, scientists at Finger Lakes Community College and Braddock Bay Raptor Research (BBRR) began asking questions about the migration patterns that they were observing during BBRR's annual hawk watch and banding program.

BBRR is a "hot spot" for both bird watchers and research scientists. Every year, thousands of hawks migrate through this region, only a 25-minute drive northwest of Rochester, New York. Between March and May 1996, BBRR scientists recorded over 140,000 hawks as they migrated north to their breeding grounds--the largest migration recorded to date.

The BBRR program maintains a network of blinds in which licensed professionals trap hawks with the purpose of installing a small metal band that contains a number issued by the Federal Bird Banding Laboratory in Maryland.

Through their activity, BBRR banders were able to observe a common pattern that has been seen in many hawk populations: the timing and distance of the migration can vary dramatically for males and females of the same species of hawk. Multiple hypotheses have been put forth to explain the sex-biased dispersal pattern, but one common feature is that males and females of a given species of hawk are often physically very different--a feature referred to as sexual dimorphism--with females often being much larger.

Researchers began to question if the migration pattern existed specifically in the red-tailed hawk population. The question arose because of a unique feature found in the juveniles of the species. Juvenile red-tailed hawks appear to be physically identical, regardless of their sex.

In order to better understand if this species of hawk exhibits a sex-biased dispersal during migration, the first step would be to develop a method for determining the sex of the bird.

In years prior, banders would simply have to enter "unknown" in the records that they submitted to the Federal Banding Laboratory. In 2005, scientists and students at Finger Lakes Community College, Rochester Institute of Technology and Delaware Technical and Community College embarked on a collaborative project with BBRR with the goal of discovering a physical characteristic that researchers could use to quickly determine the sex of a juvenile red-tailed hawk in the field. The study would not only help banders fill in their missing data, but it would also help uncover any sex-biased dispersal and migration patterns that may exist in the red-tailed hawk population.

For five years, scientists and students from the three institutions worked with banders from BBRR to collect a small blood sample from birds that were trapped during the annual banding program. Those samples were brought back to the research laboratories where students extracted DNA from blood, and then used a method called polymerase chain reaction, or PCR, to amplify a portion of the DNA, and that would help the scientists determine if the bird was male or female.

Using statistical analyses, scientists compared the data from the molecular work conducted in the laboratory with data collected from measurements taken from each of the hawks. Measurements were taken on the weight (mass), hallux length (the longest talon), culmen length (upper bill), tarsus width (lower portion of the leg), and the wing length of each bird sampled.

The analysis showed that the two strongest predictors of the bird's sex were the mass of the bird and the wing length. While neither of those measurements provided an extremely high probability of correctly identifying the sex of the bird, the combination of the two emerged as a powerful predictor. For example, a bird with a mass of 1200 grams (g) and a wing chord of 40 centimeters (cm) is a female with 97-99 percent certainty. Researchers expect that this certainty will increase as more samples are collected and added to the growing data set.

This critical information is currently being used to study the natal dispersal patterns that may exist. The researchers are also using a large archive of DNA samples to better understand the genetic diversity that exists within the red-tailed hawk population.