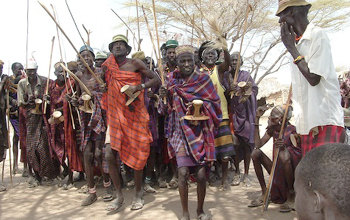 "Cooperation and Punishment" sounds like it could be the title of a hit television program, especially when the bit about stealing cows is added. But instead it's the theoretical basis of new research that looks at how members of early human societies learned to work together in large groups.

In a study supported by the National Science Foundation, Sarah Mathew and Robert Boyd, anthropologists at University of California, Los Angeles studied warfare among a society of pastoral nomads in East Africa and found fear of punishment played an important role in sustaining cooperation in risky group activities.

The finding breaks with previous theories that suggest large groups work together because early bureaucracies produced organization. Moreover, it clarifies more recent theories that advocate informal systems of punishment have the ability to maintain group cooperation and it also helps scientists better understand how cooperation evolved in early human societies.

"There are two take home messages," said Boyd, a biological anthropologist and study advisor. "First, punishment can play an important role in maintaining costly cooperation without police, courts and the other formal institutions that play a crucial role in complex societies like ours.

"Second, societies that have no recognized leader and lack formal institutions can nonetheless organize cooperation on large scales."

Mathew and Boyd reported the findings in a paper titled "Punishment sustains large-scale cooperation in prestate warfare," published in the Proceedings of the National Academy of Sciences.

Mathew, whose NSF Doctoral Dissertation Improvement Grant funded the study, collected data on warfare among the Turkana, a politically uncentralized, egalitarian, nomadic society. She examined 88 raids, in which the Turkana incurred substantial risk of death to steal cattle from members of other ethnic groups to collectively benefit their own group.

The Turkana punished cowardice and desertions by community-imposed sanctions, including collective corporal punishment and fines.

"A violation like cowardice or desertion is usually first met with verbal sanctions--criticizing and admonishing the person and making it known to him that the act has not gone unnoticed," explained Mathew.

More serious or repeated violations involved being tied to a tree and getting whipped by a group of persons the same or nearly the same age as the violator. This ended with the violator sacrificing an animal from his herd for his age-mates and seniors to eat.

"Sometimes a coward will have his share of the loot reduced," said Mathew. "Cowards also face indirect sanctions or social disapproval that may result in ostracism."

Reduction of loot is a significant penalty because the Turkana survive based on raising livestock and animal husbandry. They rely heavily on meat, milk and blood from cows, goats, sheep and camels.

Also, a man needs to pay a substantial brideprice to a woman's family to be able to officially marry her. The marriage system is polygamous, so the need for a brideprice is recurring.

Evolutionary psychologists and evolutionary anthropologists believe the human mind evolved in small-scale societies without coercive institutions such as police forces, truancy officers or tax collectors. Understanding how such societies worked is important for understanding why people are the way they are, say the researchers.

"Our results suggest culturally transmitted moral norms can support large scale cooperation in small scale, leaderless societies," said Boyd. "People may have an evolved psychology that predisposes them to cooperate with relatively large numbers of people who are not closely associated."

Close association is an important aspect of cooperation in both humans and other mammals, say the researchers, who also evaluated whether kin-based altruism could shed light on cooperation among large groups of combatants on the battlefield.

They found it could not fully explain the cooperation exhibited in the raids they studied. They concluded the Turkana raiding parties, which on average consisted of 315 men, were too large to be comprised of mostly close kin.

"In fact, our interviewees reported having only about four close kin with them on raids, made up of brothers, full cousins, nephews, uncles, fathers or brothers in-laws," said Mathew. "Furthermore, even when they had close kin with them, they did not always stay close to them during combat, standing together with their age-mates instead."

Thus, while kin played an important role in many stages of a raid, they were not the primary force gluing together the entire raiding party, the researchers concluded.

Moreover, they found kin play a less important role during actual combat than during loot division and subsequent re-distribution.

"We infer from this that kin-based altruism cannot be the full story for why warriors do not free ride in combat," said Boyd, leaving fear of group punishment as one important factor for motivating people to cooperate in large groups.

"These results challenge current views that punishment is unimportant in small-scale societies and that human cooperation evolved in small groups of kin and familiar individuals," the researchers write in their report. "Instead, these results suggest that cooperation at the larger scale of ethnolinguistic units enforced by third-party sanctions could have a deep evolutionary history in the human species."

The most surprising aspect, according to the researchers, was the contrast between the rates of male mortality due to inter-ethnic conflict compared to internal violence like homicide, or conflicts amongst groups of people within Turkana society.

A common assumption is that in a society where there are many young men with firearms there will be damaging levels of violence overall.

One reason for this could be that Turkana cultural norms and their enforcement is such that it creates a society that is successfully mitigates violent conflicts within the society while effectively mobilizing for inter-ethnic combat.

"Our vignette study comparing Turkana warriors who go off to raid another Turkana territorial section versus another ethnic group supports this interpretation," said Mathew.

"Modern societies deal with free riders with complex, culturally evolved institutions--police and courts managed by a complex administrative system. In the military, cowards and deserters are punished, and in civilian life thieves, murderers, tax cheats, swindlers and all the rest are subject to legal penalties. There seems little doubt that these mechanisms promote social order," Boyd said.