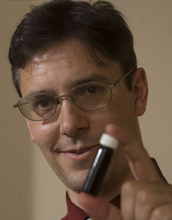 The backbone of our energy infrastructure is carbon-based fuel. In the form of oil, coal and natural gas, carbon compounds run our cars, heat our homes and cook our food. For reasons of energy security and limiting carbon dioxide (CO2) emissions, we need to transition to alternative and sustainable fuels. We can minimize the shock of transitioning away from fossil fuels to sustainable sources by using as much existing carbon-based infrastructure as possible.

All life is carbon based. Plants are the only source of sustainable carbon, in that there are no other means to simply capture carbon from the air to make carbon-based fuel. That is the beauty of plant-based biofuels and why they must have a role in our sustainable-energy future. To convert plant-based carbon into fuels we can use in our cars, we must first understand the composition of the plants.

First, think of how your body stores energy: as fat but also in a structurally different type of molecule called protein; plants have a similar dichotomy. A plant stores energy as starch, sugar and fat, but is also structurally composed of lignin and cellulose (or 'lignocellulose'). Take corn as an example: from kernels comes starch and sugar that can be fermented to make ethanol; corn oil can be used to make biodiesel.

The structural materials of plants are the cheapest and most abundant forms of biomass available--plus, humans can't eat them (cows and beavers can, only because their guts have special bacteria). Fuel made from inedible material has the benefit of never directly interfering with food production.

Research conducted at the University of Massachusetts, Amherst, and headed by George Huber focuses on converting sawdust and switchgrass into "green gasoline"--a fuel that we can use within our current infrastructure. In a few years, consumers may start to see it blended with what they buy at the pump.

"Unless there's a sign that tells you so, you won't even know your gas is 'green,'" said Huber. "It has zero carbon footprint. The CO2 from your car is recycled to the plant when it re-grows."

A technique called catalytic fast pyrolysis in a fluidized bed is one used for making green gasoline. Let's break this process down by the terms and techniques used:

A catalyst is a material used to make a specific chemical reaction happen quicker than it normally would. The reaction in question? Turning lignocellulose into gasoline. The catalyst that does that uses a special class of materials called "zeolites," materials made of silicon, aluminum and oxygen atoms that are arranged in intricate geometrical frameworks in a crystal-like pattern.

Spaces between the atoms held together in these frameworks are called micropores, which hold carbon-based molecules on the catalyst surface in an arrangement that causes them to form molecular products of the same size as the pore. The trick is to select a zeolite with a pore size equal to that of gasoline molecules. The catalysts the Huber lab uses are inexpensive materials currently used in the petrochemical industry.

Pyrolysis is the high-temperature breakdown of large molecules (such as cellulose or plastic) into small-molecule vapors. The pyrolysis is "fast" because quick heating is necessary to turn the plant carbon into vapors instead of char. "Slow pyrolysis" is how charcoal is made.

In a camp fire, the flames you see are actually wood-pyrolysis vapors reacting with oxygen. Flame heat causes the log to pyrolyze more and maintains itself until the log's surface becomes too covered in char to produce more vapors. In the lab, pyrolysis of sawdust is done in the absence of oxygen so the vapors can't burn like they do in a fire--the vapors instead react on the catalyst surface to form gasoline.

Fluidization is a technique for maximizing contact and mixing between the gas vapors from the pyrolysis and solid catalysts. Envision how a bed of gravel dances beneath the end of a syphon tube when someone is cleaning a fish tank; the gravel is fluidized by the water. In the lab, the role of gravel is assumed by a bed of sand-like zeolite catalyst particles and sawdust undergoing pyrolysis. The water is replaced with a stream of hot gas entering from the bottom, called a "fluidizer." Vapors leaving the catalyst surface get blown out of the reactor where they are condensed as fuel with an octane rating typically near 108.

Because lignocelluose contains more oxygen than gasoline, a portion of the carbon (roughly 25 percent) must leave as carbon monoxide and carbon dioxide.

At scales larger than in the lab, a fraction of the stream will be used as the fluidizer gas. The remaining 75 percent of carbon is theoretically available for producing gasoline, but char formation cuts into this number.

The char forms a black coat on the catalyst particles. For the reaction process to run for long periods, particles of charred catalyst must be recycled through a furnace where char is burned off, producing more carbon oxides. The furnace creates enough heat to power catalytic fast pyrolysis. Currently, 30 percent of the carbon from the sawdust fed into the system leaves the facility as gasoline.

It takes 45 pounds of sawdust to make a gallon of gasoline. However, there is an advantage. Notice how a facility using the technology needs no inputs other than the sawdust and air--the pyrolysis technology would be possible for isolated, off-the-grid locations where lots of plant materials are available.

Pilot-scale tests have proven successful and will be scaled up into a demonstration chemical plant soon.

"This is a great time to be in this field. As the price of oil increases, it gives opportunities to future engineers," said Huber. "It's up to the new generation to find solutions for the future."