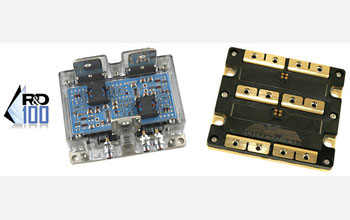 Arkansas Power Electronics International (APEI) is one of the companies working on a solution to this challenge. A small research and development company based in Fayetteville, Arkansas, APEI's goal is to build state-of-the-art technology for the development and application of power electronics.

The Department of Energy's research agency has included APEI as one of the agencies to fund, helping to develop more energy efficient power electronics. As part of the Agile Delivery of Electric Power Technology project, APEI's research will help create a power module that can support the demands of plug-in electric vehicles.

Modern silicon semiconductors generally can't handle temperatures higher than 150 degrees Celsius. Heat is no longer a limitation when designing silicon carbide power modules, but is instead a design factor. The silicon carbide power module that APEI helped develop along with the University of Arkansas won an R&D 100 award in 2009 for being one of 100 new global technological breakthroughs.

As a result of the silicon carbide semiconductor's development, APEI also designed a new power module that can help provide the power conversion necessary to charge plug-in electric vehicles. "The advantages are many, from higher efficiency to reduced size and weight enabled by high frequency operation," said McNutt.

The new power module is called the multichip power module, and is designed to be a very compact, cost-efficient, lightweight solution for the plug-in vehicle's charging dilemma. APEI's patented power module technology integrates both the power and control circuitry into one compact power module.

The development of silicon carbide semiconductors has led to the need for power modules that will reduce cost and increase efficiency for power electronics. "APEI, Inc.'s multichip power module technology is designed around the silicon carbide components," said McNutt. Because of the "ultra-high speed switching for greater efficiency... the power modules are also capable of temperatures in excess of 250 degrees Celsius, offering the end user greater thermal headroom over traditional silicon electronics."

APEI's new power modules aim to produce a power module that charges at an efficiency rate of greater than 96 percent while most modern power modules today only charge at efficiencies of less than 92 percent.

"The higher temperature capability and higher switching frequency one can achieve by combining these two technologies will allow power electronics systems to obtain a tenfold reduction in size and weight if the system is designed around the technology," said McNutt.

APEI's charging module is one of the new technologies paving the way for green energy vehicles in the future. Weight reduction and increases in efficiency make the future look promising for technologies implementing silicon carbide technology. Electric vehicles offer an innovative direction for personal transportation, especially as rapid-charging is developed to make them more convenient.

As plug-in hybrids continue to become more and more widely available, it's very possible that gasoline-powered vehicles will no longer be the most popular option for personal transportation.