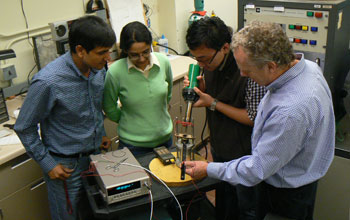 Most of today's power plants--from some of the largest solar arrays to nuclear energy facilities--rely on the boiling and condensing of water to produce energy.

The process of turning heated water into energy was essentially understood by James Watt all the way back in 1765. Heat from the sun or from a controlled nuclear reaction boils water, which then expands, moves a turbine and generates power.

Why water? It is cheap; it absorbs a lot of "latent heat" as it turns into steam; it produces a lot of power as it expands through the turbine; and it is easily condensed back to liquid water using an environmental source such as a river.

Beginning from the fundamental research of Nicolas Leonard Sadi Carnot in 1824, engineers have learned how to manipulate the boiling and condensing of water, using this "phase transformation" between liquid and gas to generate electricity.

Adding heat to the water at the right point in the cycle and preventing heat exchange at other points during the cycle enables researchers to ultimately extract the most power from the steam. In this way, they carefully designed the cycle to maximize its efficiency, a mathematical concept that Carnot defined.

"This boiling and condensing of water requires massive pressure vessels and heat exchangers to contain the water," said researcher Richard James, of the University of Minnesota.

James and his team of researchers want to substitute a completely different phase transformation to replace the boiling and condensing of water. They have been investigating that possibility using a family of metal alloys (specific mixes of different elements) called "multiferroic materials."

"The key idea is to manipulate the composition of the alloy so the two crystal structures fit together perfectly," James said. "When this is done, the hysteresis of the phase transformation drops dramatically and it becomes highly reversible."

Even after the first low hysteresis alloys began to emerge, the strategy was all based on theory. "To be sure that the hysteresis dropped for the expected reason, it was critical that we actually see the perfect interfaces in tuned alloys," James said.

For this purpose, James teamed with Nick Schryvers from the Electron Microscopy for Materials Science laboratory at the University of Antwerp in Belgium, a celebrated center for the study of phase transformations using electron microscopy. The resulting study, by Schryvers and University of Antwerp graduate student Remi Delville, revealed perfectly matching interfaces between the two phases.

The researchers pursued the concept in a family of alloys called Heusler alloys which are magnetic, even though the metals that make them up aren't. Named for the German mining engineer Friedrich Heusler, who first noticed that Cu2MnSn (copper-manganese-tin) is magnetic even though the separate elements Cu, Mn and Sn are nonmagnetic, this family of alloys has a striking propensity to exhibit magnetism. As James notes, Heuslers are also loaded with martensitic phase transformations.

"Ni45Co5Mn40Sn10 is a remarkable alloy," said James. "The low temperature phase is nonmagnetic but the high temperature phase is a strong magnet, almost as strong as iron at the same temperature." The researchers immediately realized that such an alloy could act like the phase-transitioning water in a power plant.

"If you surround the alloy by a small coil and heat it through the phase transformation, the suddenly changing magnetization induces a current in the coil," said James. "In the process, the alloy absorbs some latent heat. It turns heat directly into electricity."

The consequences for the technology are potentially far-reaching. In a power plant, one would not need the massive pressure vessels, piping and heat exchangers used to transport and heat water. Since the transformation temperature can be adjusted over a wide range, the concept is adaptable to many sources of heat stored on earth with small temperature differences.

"One can even dream of using the temperature difference between the surface of the ocean and a few hundred meters down," James said.

Together with Professor Christopher Leighton at the University of Minnesota, the researchers are also studying the possibility of making thin film versions of their devices. Those could work in computers, right on the chip, to convert waste heat into electricity to charge the battery.

James emphasizes that their demonstration is just one of many ways one can use martensitic phase transformations for energy conversion.

"Besides magnetism, there are many physical properties that could be different in the two phases and could be used to generate electricity from heat," James said. "But how to develop these concepts and which ones will work best?"

"Even the criterion for 'best' is unclear, since one does not pay for waste heat," James continued. "Really, we have to rethink from fundamental principles the thermodynamics of energy conversion at small temperature difference."