Older Is Better for Hunting Dogs 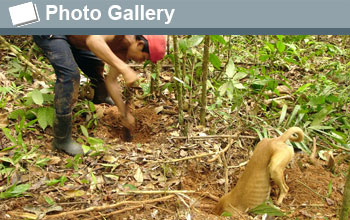 Older dogs and male dogs are better hunting companions than younger dogs and female dogs says the author of a new study on the hunting ability and nutritional status of domestic dogs in lowland Nicaragua. In addition, he says, dogs are more suited to wildlife sustainability than other hunting options.

"I was a little surprised to find that male dogs are harvesting more than females because few anthropologists have commented on sex-related variation in hunting ability," said University of Cincinnati (UC) anthropologist and lead investigator Jeremy Koster. "In fact, when anthropologists have reported anything along these lines, it's usually to report informants' claims that there are no differences between males and females."

Koster and anthropologist Kenneth Tankersley, also with the UC in Ohio, recently examined key demographic variables such as age and sex on the amount of harvested game that dogs contribute from subsistence hunting in an indigenous community, which has a long and important role in community survival. The research is one of few projects to study these differences in hunting dogs.

Funded in part by the National Science Foundation, the study appears in the Proceedings of the National Academy of Sciences.

"Dr. Koster's and Dr. Tankersley's research findings make a crucial contribution to understanding human subsistence strategies in tropical rain forest environments," said Deborah Winslow, a program director for NSF's Cultural Anthropology Program. "Such knowledge is essential for preserving these environments while still allowing sustainable economic exploitation. On a larger scale, the research also helps us to understand our evolutionary past, including the reasons that dogs may have been domesticated in the first place."

Koster and Tankersley found that as both male and female dogs reach three years of age, they tend to increase their hunting success and produce greater harvests. Older, male and female dogs in the study population returned more game to their owners than did younger dogs.

"The increase in hunting success with age could reflect learning via experience," said Koster, director of graduate studies in anthropology at UC. "On the other hand, the apparent age-related increase in ability might indicate that only talented hunting dogs reach advanced ages, perhaps because unskilled hunting dogs receive poorer care and die relatively young."

"We expect that hunting ability would eventually decline as dogs get older, but the reality is that few dogs reach eight or nine years old because even well-treated dogs often succumb to snakebites or jaguar attacks."

There also seems to be a trend that bigger dogs are able to track and corral bigger prey, said Koster, which increases the hunting return rates of their owners, and in general, male dogs are bigger than females. Even so, more work needs to be done to determine if males are better hunting companions at other locations in which locals use dogs to harvest prey, he said.

Koster and Tankersley conducted the study in Nicaragua's Bosawas Biosphere Reserve, which is part of the largest unbroken tract of neotropical rainforest in Central America, north of the Amazon Rainforest. The researchers based the study on the hunting activities of the Mayangna and the Miskito, two indigenous ethnic groups who live along a tributary of the Coco River, not far from the border with Honduras.

Community members in the region capture about 85 percent of harvested mammals with the aid of dogs, according to the report.

"Conservation biologists are justifiably concerned about the impact of subsistence hunting on wildlife populations," said Koster, "but if sustainable hunting is the goal, then hunting with dogs might be a better option than the alternatives."

Koster argues that hunters with firearms tend to disproportionately hunt prey that lives in trees, including slow-breeding primates that are easy to over-hunt, whereas hunters with dogs tend to harvest relatively fast-breeding animals such as agoutis, pacas and armadillos. He says these populations are harder to deplete, partly because they adapt well to the heavily-used forests near human settlements.

"Overall, then, if you have a choice of hunting with guns or hunting with dogs, the latter will more likely result in long-term sustainability in many settings," said Koster, who promotes Amazon Cares, a non-profit organization devoted to the welfare of dogs in rural Latin America.

Most dogs in the study were mutts observed one of Koster's colleagues at the Saint Louis Zoo. Koster personally observed that there didn't seem to be much managed breeding of dogs, if at all, among the study population.

The finding leaves open the question which type of dog makes the best hunters, although hunters in the region talk about the different breeds that one encounters in the reserve.

Meanwhile, dogs that are not good hunters are almost never taken on excursions. Instead, they are allowed to lounge around the house and "patio."

"It certainly seems like the incapable dogs don't look as healthy," said Koster. "They seem to get more mange, for example. Perhaps an owner is less likely to buy medicines for a dog that doesn't contribute something as a hunting companion."

The research was funded by a Dissertation Improvement Award from NSF's Division of Behavioral and Cognitive Sciences. In addition, the Hill Foundation, a William Sanders dissertation grant, the Charles Phelps Taft Research Center and the University of Cincinnati Research Council supported the research.