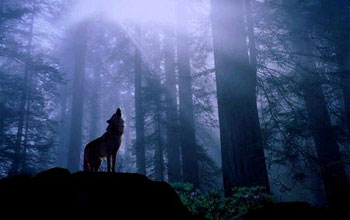 Soundscape: the landscape of 'nature's music' when a wolf howls in the forest.

Unfamiliar words. But they shouldn't be. We're surrounded by them morning, noon and night, say ecologist Bryan Pijanowski of Purdue University and colleagues.

Biophony is the music created by organisms like frogs and birds; geophony, the composition of non-biological sounds like wind, rain and thunder; and anthrophony, the conglomeration of noise from humans.

What they add up to is a cacophony--a mix of sounds made by the environment, and by people; a background to which most have become tone-deaf.

"Another word for it is 'soundscape,'" says Pijanowski.

He and colleagues are leading an effort to spawn a new field called soundscape ecology. It uses "nature's music" to understand the ecological characteristics of a landscape. It also reconnects people with Earth-sounds.

"Natural sound could be the 'canary in the coal mine,'" says Pijanowski. "Sound might be the critical first indicator of changes in climate and weather patterns, or the presence of pollution."

The dawn and dusk choruses of birds, for example, are characteristic of a certain location.

If the intensity or frequency of these melodies change, "there's likely something causing it," says Pijanowski. "Ecologists have largely ignored the ways in which sound can help determine what's happening to an ecosystem."

Pijanowski and colleagues have received a grant from the National Science Foundation's (NSF) Dynamics of Coupled Natural and Human Systems (CNH) Program to study soundscapes.

NSF CNH awardees work to provide a better understanding of natural processes and cycles, and of human behavior and decisions--as well as understanding how and where they intersect.

"CNH highlights the need for scientists from different fields to work together and benefit from each other's perspectives to gain an understanding of the complex ways people interact with Earth's natural systems," says Tom Baerwald, CNH program director in SBE. "Findings from these projects will help individuals and groups address environmental problems more effectively."

"By bringing together researchers from a wide variety of academic fields," adds Sarah Ruth, CNH program director in GEO, "the projects are providing valuable new insights into the ways in which we, our environment, and the natural resources we rely on act as one interconnected system."

"CNH addresses societal challenges in the management of 'ecosystem services' and in adaptation to climate change," says Alan Tessier, CNH program director in BIO. "The soundscapes project is one such effort."

Since Rachel Carson's far-reaching 1962 book Silent Spring, the sounds of nature have been linked with environmental quality.

"Over increasingly large areas of the United States," wrote Carson in Silent Spring, "spring now comes unheralded by the return of the birds. The early mornings are strangely silent where once they were filled with the beauty of bird song."

Carson's observations turned out to be right.  What began as her observation of sound--or its absence--ultimately led to the ban of DDT, the insecticide responsible for precipitous drops in numbers of bald eagles and their avian relatives.

The study of soundscapes can yield valuable information about very different landscapes, say Pijanowski and colleagues like Bernie Krause of Wild Sanctuary, Inc., in Glen Ellen, California, and Almo Farina of Urbino University in Italy.

Pijanowski has mapped soundscapes in wetlands and agricultural fields in Tippecanoe County, Indiana; near burbling streams and in high-wind chaparral in Sequoia National Park, California; and in the bird-song-filled forests of Italy and Costa Rica.

The ecosystem that surrounds the La Selva Biological Station in Costa Rica, for example, is home to more than 5,000 species of plants, 500 species of birds, three dozen frogs and kin and hundreds of species of insects.

"Geophony is a hallmark of this landscape, too, with strong winds moving through trees, raging rivers audible from far away, and intense tropical rain showers that fill the 'acoustic spaces,'" says Pijanowski.

Acoustic spaces are equally "noisy" in the beech forests of Italy's Apennine National Park. There Pijanowski and other scientists collected three-hour recordings from 6 a.m. to 9 a.m. each day.

Data from the acoustic recorders were used to construct "soundtopes"--three-dimensional maps of acoustics plotted across the landscape.

The daily maps show that large seasonal changes happen in this beech forest. "We anticipated that the maps would be similar," says Pijanowski. "But that wasn't the case."

Recordings like those made in Apennine National Park will become tomorrow's "acoustic fossils," says Pijanowski, "possibly preserving the only evidence we have of ecosystems that may vanish in the future."

Soundscapes, he believes, represent the heritage of our planet's acoustic biodiversity and reflect Earth's assemblages of organisms.

"Natural sounds are an auditory link with our environment, one we need. Society's growing 'nature deficit disorder' is likely to increase as we replace these sounds with the din made by humans."

Almost 50 years ago, Rachel Carson highlighted the dangers of pesticides and their potential threats to wildlife, and to us.

A half-century later, "the unintended silencing of organisms by human activities is an indication of our continued effect on the planet's ecosystems," says Pijanowski.

Through soundscape ecology, he hopes to record and study Earth-music--while there's still time.

While frogs yet sing, waves break, and the wind whistles through the forest.