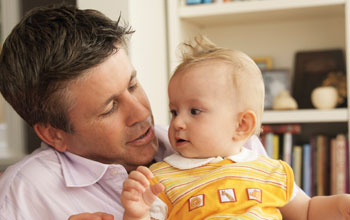 Researchers say infants understand the meanings of some words by the time they're 6 months old.

Suppose a baby's first word is "mommy" or "daddy"--words an infant usually says around his or her first birthday. Of course, the little cherub puts a gleam in her parents' eyes; she's finally talking and is well on her way to becoming the next big opera star or a world famous author.

"By 6 months, infants understand the meaning of words related to foods and body parts," said Elika Bergelson, a doctoral candidate in the department of psychology at the University of Pennsylvania, who recently conducted a study that challenges current views of the developmental sequence of human language learning.

"Unlike previous research, which has shown that young infants know their own name or the words 'mommy' or 'daddy,' or can be trained to learn words for novel objects in the lab, here we show that infants have knowledge about word categories that are a part of their daily life."

Bergelson and her coauthor, associate professor Daniel Swingley, also with the department of psychology and the Institute for Research in Cognitive Science at the University of Pennsylvania, conducted the study. The Proceedings of the National Academy of Sciences published the study in its February 13 issue.

"The work by Swingley and colleagues continues a long tradition of research demonstrating that even very young infants engage in complex perceptions and inferences about the world around them," said Peter Vishton, a developmental psychologist in the National Science Foundation's Division of Behavioral and Cognitive Sciences, which partially funded the study.

"Babies can't tell us about what they know, but their looking patterns demonstrate that they make sense of the people, objects and events in their surroundings," said Vishton, "to some extent from the moment they are born."

Using a research method called "language-guided looking" or "looking-while-listening," researchers presented 6 to 9-month-old infants with visual displays, usually sets of two pictures. Then a parent named a picture in each set using a sentence like, "Look at the apple." Researchers then gauged the infant's visual fixations on named pictures as a measure of the infant's word understanding.

Most of the 33 infants in the study recognized most of the 20 items tested, which were food-related or body parts. Researchers compared the tests of the 6 to 9 month olds with 50 babies 10 to 20 months old.

"We were most surprised that we found evidence of word-meaning knowledge this early," said Swingley. "We knew that infants around this age were very good at discriminating and categorizing speech sounds, but it seemed unlikely that they would be able to show word-meaning knowledge, without training, in the laboratory setting."

Prior research generally classifies infants younger than about 10-12 months as prelinguistic and conventional thinking suggests word learning doesn't start until around a child's first birthday. Because of this, the researchers in this study expected to find that maybe around 9 months there might be some word recognition, but certainly not at 6-7 months.

"In the context of this tradition," said Vishton, "the current finding that 6-month-olds possess knowledge about the meanings of nouns associated with body parts is quite striking."

"The babies surprised us," said Swingley.

"The bulk of current evidence on the language abilities of 6-12 month olds document their savvy abilities to pull out various properties about the sounds of language: Which sounds their language has as separate categories, where words begin and end, what kind of patterns or consistencies there are in the speech stream, etc.," said Bergelson, arguing that this leads to language acquisition theories that suggest infants younger than 10-12 months old are not yet "word learners."

"Our findings may lead to changes in the way that we understand language acquisition and its development," she said.

"In terms of the message to parents and caretakers," added Swingley, "our work suggests that young infants understand a little of what is said to them, so it makes sense to talk to them. When we talk to infants as real conversational partners, and talk about what they are interested in, we create the ideal conditions for learning."

"There's more and more work showing strong correlations between how much parents talk to their young children and those children's vocabulary size," he said. "Overheard language doesn't do it, television doesn't do it. What young children learn from best is when we treat them as real conversational partners."

The National Institutes of Health also funded part of this research.