Predicting "Cosmic Fireworks" From Our Own Backyard

Using the largest map of the cosmos ever, astronomers have counted nearby double white dwarfs, stars thought to cause an important type of supernova 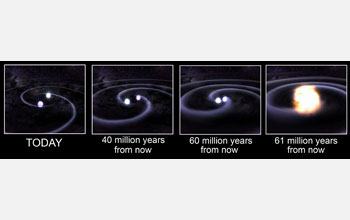 This series of artist's concepts shows two white dwarfs orbiting one another.

The right resource, and a lot of hard work, can really light up the sky.

Taking advantage of a little-known feature of the National Science Foundation-funded Sloan Digital Sky Survey (SDSS), a team of astronomers led by Carles Badenes of the University of Pittsburgh recently helped clarify the origins of an important type of cosmic explosion using nothing but a few thousand small, faint stars.

The SDSS already has produced the most detailed map of the universe ever created, with images of nearly 500 million stars and galaxies available to the public. The map shows the structure of the universe at the grandest scales, with long walls of galaxies snaking around near-empty voids. But in addition to these ultra-distant galaxies, the SDSS also has mapped nearby stars in the Milky Way.

"If we happen to see a Type Ia supernova in a distant galaxy, we can figure out how far away that galaxy is," says Badenes.

In fact, using Type Ia supernovae to measure galaxy distances is what led astronomers to discover the universe is accelerating--a breakthrough discovery that was recognized with the 2011 Nobel Prize in Physics.

Although it's known what happens during a Type Ia supernova explosion, amazingly, it's not known for sure what kinds of stars create them. "We know that there have to be two stars involved, and that one of them has to be a white dwarf," says Dan Maoz, an astronomer at Tel Aviv University in Israel, who also studies supernovae.

The other star could be either a "normal" star like the sun, or another white dwarf. If both stars are white dwarfs, they orbit around one another at half a million miles an hour, getting closer and closer, and moving faster and faster--until one day they collide and merge, most likely forming the fireworks of a Type Ia supernova.

"There are reasons to suspect that both are white dwarfs," Maoz says. "But the biggest question mark is: Are there enough double white dwarfs out there to produce the number of Type Ia supernovae that we see?"

To answer that question, Badenes and Maoz searched for double white dwarfs within about a thousand light-years of the sun. The way to find such double stars is to look at the spectra of many stars--a measure of the amount of light a star gives off at different wavelengths. Along with its detailed sky images, the SDSS has also gathered more than 1 million spectra, all of which are available to anyone, free of charge, through data access tools linked from the SDSS website.

After a tip from Robert Lupton, one of the pioneers of the SDSS, Badenes and Maoz looked at an obscure feature of SDSS spectra, which are actually measured in three parts, then added together to make a complete spectrum. But the individual sub-spectra are still available, and it turned out that the time that passed between the three measurements was exactly right for spotting the quick orbital motions of binary white dwarfs.

Starting with a list of more than 4,000 candidate stars, Badenes and Maoz studied the sub-spectra with another colleague, Steve Bickerton, to identify 15 double white dwarfs--and "if there were more than 15, we would have seen more than 15," Badenes says.

The result? On average, a double white dwarf merger event occurs in the Milky Way about once a century. That number is remarkably close to the rate of Type Ia supernovae seen in similar galaxies, suggesting that merging white dwarfs is indeed a plausible explanation for Type Ia supernovae.

"We needed a lot of different things for this study," Badenes said. "First we needed spectra--lots of them. We had to be able to directly compare them. And we needed them all over the sky. There was only one place to go to get that data. Without the Sloan Digital Sky Survey, this discovery would have never been possible."