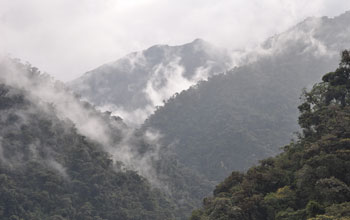 The omnipresent fog of the cloud forest in Ecuador's Oyacachi watershed.

Scientists supported by NSF's Science, Engineering and Education for Sustainability (SEES) programs use everything from microscopes to deep-sea submersibles in their research.

But how many SEES scientists need a machete?

During Earth Week--or any time of year--that's exactly what LeRoy Poff requires. Poff is an aquatic ecologist and evolutionary biologist at Colorado State University and an NSF SEES Dimensions of Biodiversity principal investigator.

To characterize the lesser-known aspects of the diversity of life on Earth, NSF's decade-long Dimensions of Biodiversity campaign aims to transform by 2020, how scientists describe and understand the scope and role of life on Earth.

Earth is rapidly losing species. It's happening faster than scientists can understand the roles these species play and how they function.

With their disappearance comes lost opportunities to comprehend the history of life, to better predict the future of the living world and to make beneficial discoveries in the areas of food, fiber, fuel, pharmaceuticals and bio-inspired innovation.

Poff and colleagues from Colorado State, Cornell University and the University of Nebraska are trying to change that.

They're studying how temperature variation and extreme weather such as floods and droughts affect life in temperate Colorado and tropical Ecuadorian streams.

The scientists are comparing how aquatic insects and fish in small streams along the Colorado Front Range--which has a seasonally variable climate--and insects, fish and amphibians in streams in Ecuador, with its more stable climate, are faring at a time when Earth is heating up.

"To get to our Colorado research sites," says Poff, "there's relatively easy access along mostly paved roads." But to reach streams in the cloud forest headwaters of the Amazon, he says, it takes a machete to bushwhack through tangled vines choking narrow waterways.

Poff and colleagues will identify new species in both locales by barcoding these species' DNA, as well as track species' movements based on their tolerance of warming water and declining oxygen levels.

"We're trying to understand how animals will respond to climate change based on their evolutionary history in a particular climate zone," says Poff.

"To do that, we need to know their physiological responses to thermal and oxygen stress. This is one of the first studies to look at the sensitivity of species to both temperature and environmental variation such as floods and droughts."

The research team's hypothesis is that temperate species are likely to be less sensitive to climate change than those in the tropics.

Temperate streams are subject to large seasonal differences in temperature; the organisms that live in them occupy a wide range of elevations.

In the Colorado Rockies, for example, there's a big change between summer and winter temperatures in streams. That suggests, Poff believes, that species there could be somewhat tolerant of future climate warming.

In contrast, studying species diversity in the tropics, he says, is like taking apart the layers of a cake.

"Temperature doesn't vary seasonally at any given altitude," says Poff. "But as you move up in elevation you pass through layers of increasingly colder temperatures."

He's trying to discover whether aquatic insects, fish and frogs are restricted to a narrow range of elevation and temperature--one layer of the cake.

"If they are--and that's coupled with a poor ability to disperse over land to find another small stream as temperatures warm--they could be more vulnerable to changes in climate," Poff says.

He plans to use a new understanding of species' sensitivity to climate change, and the ability of species to move with changing conditions, as a basis for developing maps for policymakers and others.

The maps will show where animals are most vulnerable to climate change in tropical and temperate streams.

"The knowledge being developed," says Tim Killeen, NSF assistant director for Geosciences, "will lead to improved, science-based decision-making about our common future."

To reach that goal, Poff is fording chutes from North to South America. His research takes not only microscopes and high-tech genetics labs.

It takes a machete.