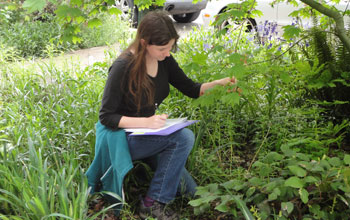 On April 30, 2012, the USA National Phenology Network (NPN), partially funded by the National Science Foundation (NSF), received its one-millionth nature observation from volunteers--many of whom are non-scientists or "citizen scientists." The observation will help understand the impacts of climate change on Earth's plants and animals.

Resource managers combine the data into an increasingly detailed record of how Earth's climate is evolving and how it might affect humans and Mother Nature down the road.

"Hitting the one-millionth observation is exciting because researchers and decision-makers need more information to understand and respond to our rapidly changing planet," said Jake Weltzin, a U.S. Geological Survey scientist and executive director of NPN. "More information means better-informed decisions that ensure the continued vitality of our natural areas that we all depend on--and enjoy."

Watching and reporting the flowering of a nearby vine maple, Acer circinatum, turned into the millionth observation submitted through NPN's online observation program, Nature's Notebook. Lucille Tower, an amateur scientist from Portland, Ore., submitted the record.

Tower responded "yes" to the question on the NPN's observation submission form: "Did you see: One or more fresh open or unopened flowers or flower buds visible in the plant?" The record marked a precisely defined point in the life cycle of the vine maple, something that researchers observe while monitoring how climate change affects the start and end point of a plant's viability.

"We're excited about the quantity of observations and what it means for potentially answering the big questions," said Alyssa Rosemartin, NPN's assistant director.

"Our first records in the contemporary system are from Erin Lindquist, a professor at Meredith College, whose students collected thousands of records on deciduous tree phenology in North Carolina in the fall of 2008, and the millionth was submitted by a participant in Portland Budwatch, one of our partners that has set up several phenology trails and trained 100 observers in Portland. Look how far we've come."

NPN provides a myriad of societal benefits by, for example, supporting the development of more accurate forecasts of the onset of allergy seasons; the spread of vector-borne diseases, such as lyme disease and West Nile virus; the movements of invasive plants; and the development of drought conditions--information that could be used to help improve the health and welfare of large human populations, contribute to the management of water resources, wildlife and working farms and ranches, and maintain the vitality of ecosystems.

Increasing the application of nature observations to economic analyses is a goal of NPN, and citizen scientists have more than been up to the job. "Depending on the task at hand, trained non-scientists can produce data that is just as reliable as data produced by (professional) scientists," said Weltzin.

Steps in the journey

In addition to producing high-quality data, armies of NPN volunteers also produce a high quantity of data. NPN typically receives between 2,000 and 3,000 nature observations per day--most of which would otherwise be unobtainable.

Weltzin said that each and every one of these observations is important because they help fill a hole in our knowledge base. Moreover, a single observation can be analyzed in tandem with other observations to help create the big picture of how a particular species is responding to climate changes.

Suppose, for example, that several volunteers in a certain geographic area each alert NPN as to the first bloom date of a dogwood tree in the spring. Those individual observations could then be analyzed as a group to determine the pattern of dogwood blooms in the area.

"So much of our improved understanding about global environmental changes is driven by varied and valuable sources of information that include ambitious networks of citizen scientists," said John Wingfield, NSF assistant director for Biological Sciences. "Knowledge gained from their dedicated work will continue to have a lasting effect on how we understand regularly recurring biological phenomena for hundreds of plant and animal species and collectively, they contribute to the policy arena."

Changes in phenology are among the most sensitive biological indicators of global change. Across the world, many springtime events are occurring earlier--and fall events happening later--than in the past. Plants and animals are responding to these changes in different ways and at different speeds. These varying responses can be damaging to the life-sustaining relationships among creatures that have been dynamically stable for thousands of years.

For example, some wildflowers that migratory hummingbirds look for when they arrive in their summer habitats are flowering earlier--even before the hummingbirds arrive. The resulting missed opportunity with the flowers can deprive the birds of an important food source. If the trend continues, populations of hummingbirds and wildflowers could precipitously decline.  In addition, some birds now remain year-round in their summer habitats instead of flying south for the winter.

Because of these types of changes, scientists need more and improved information about the pace and pattern of nature--locally to nationally--to answer important scientific and societal questions and to build the tools and models needed to help people understand and adapt to the changes at hand.

Individuals of all ages, from school children to retirees, as well as entire classes and community groups, are invited to join the NPN "army" of citizen scientists; no minimal level of commitment is required. Some volunteers submit their observations on a regular basis while others contribute occasionally, or even contribute valuable archived "shoeboxed" records that, when possible, are added to the NPN database to support analyses of long-term trends.

What could be in it for you?

Weltzin said that volunteers contribute to NPN for varied reasons, including the opportunity to:

Related Websites
An NSF article on NSF-funded citizen science groups: http://www.nsf.gov/discoveries/disc_summ.jsp?cntn_id=123903&org=NSF
Photo gallery about citizen science groups that was contributed by NSF and featured in The Washington Post on Earth Day 2012.: http://www.washingtonpost.com/conversations/earth-day-six-ways-to-help-scientists-in-your-own-backyard/2012/04/20/gIQAQONRVT_gallery.html
The archive of a recent journal Science-sponsored chat with Jake Weltzin and David Inouye of NSF on the ecological impacts of early springs.: http://news.sciencemag.org/sciencenow/2012/03/live-chat-spring-forwardthe-ecol.html