Hitchhiker's Guide to The Deep 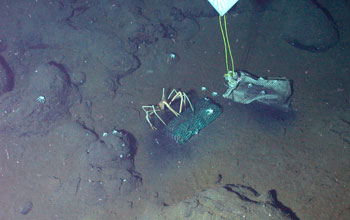 The submersible Alvin brought back some unexpected hitchhikers from The Deep.

What Adams might not have known is that the inner space of the oceans conceals aliens every bit as resourceful as any that might lurk in outer space.

"And now these deep-sea dwellers have turned the tables on us," says Janet Voight, a biologist at the Field Museum of Natural History in Chicago.

Voight and other scientists studying deep-ocean hydrothermal vents have discovered that some life-forms can survive the extreme pressure change from ocean floor to sea surface.

On a recent dive in the deep-ocean research submersible Alvin, some unexpected companions--38 of them, to be exact--found their way topside.

Lepetodrilus gordensis, the invader is named. It's a type of marine snail called a limpet, well-known for its ability to stick like glue to surfaces.

"No one thought that included the gear of a submersible, however," says Voight.

The fauna at deep-sea hydrothermal vents is among the most isolated and inaccessible on Earth. Life at vents is based on a process called chemosynthesis, which, unlike photosynthesis, doesn't depend on sunlight. Rather, it survives on chemicals spewed from the vents themselves.

"Hydrothermal vents can only be visited by subsea vehicles, which can and do move freely among them," wrote Voight and colleagues in a paper published recently in the journal Conservation Biology.

"Researchers assumed that individual animals in the vent fauna, if brought to the surface, would be killed by the change in water pressure," says Voight. "Clearly it's not so."

After one Alvin dive, Voight found the 38 vent limpets in samples taken from an undersea locale where there are no hydrothermal vents--and therefore no vent limpets.

The scientists had collected samples from a non-limpet habitat along the Juan de Fuca Ridge, deep under the surface of the northeastern Pacific Ocean. But when Voight looked at the treasure trove, it contained limpets.

"What's wrong with this picture?" she asked. "Well, that limpet species was known only from the vents of the Gorda Ridge, 635 kilometers south of Juan de Fuca."

The question became: How did the limpets get more than 600 kilometers from their habitat? "The only answer was that they must have been transported by the sub."

Which just goes to show, says Chuck Lydeard, a program director in the National Science Foundation's (NSF) Division of Environmental Biology, which funded the research, "that humans cannot assume anything about the dispersal capabilities of other organisms, including those thought to be restricted to the most extreme environments on the planet."

The inadvertent introduction of a new species to an ecosystem is a major challenge to conservation efforts.

How a species will react to new surroundings, and the effect it has if it begins to reproduce and take over, is unpredictable.

"Deep-sea drilling and submersible activity can increase the probability of such introductions," says Voight, "but until now hydrothermal vents were considered too isolated to be a source of invaders."

In coastal areas, one of the biggest threats from invasive species is the introduction of diseases. Newly introduced pathogens can cause mass mortality in native species. Diseases that may exist in extreme environments such as hydrothermal vents have not been well-studied, says Voight.

"It's clearly possible to accidentally introduce a species--and any potential diseases it may carry--from a deep-sea vent to a new location," she says. "That has implications for the future exploration of hydrothermal vents. It reveals the potential risk of human-driven change to ecosystems, even those ecosystems most of us will never see."

The discovery is a valuable lesson to the scientists and vehicle operators who work in the deep sea, says Brian Midson of NSF's Division of Ocean Sciences.

"Potential cross-fertilization and contamination of hydrothermal vents and other sites need to be considered during pre and post-dive activities," says Midson. "This new information will result in future discussions between shipboard crew and research scientists about the need for rigorous cleaning and inspection of sampling gear and vehicles, before and after every dive."

The limpets Voight found hitched a ride somewhere in the sub's suction sampler, she believes, "perhaps in the corrugated hose, where enough water pooled to keep them alive.

"Replacing the corrugated hose with a smooth hose may help prevent inadvertent transplants of biota, but any surface or crevice on the submersible or its gear could provide a refuge."

The scientists urge other researchers to assume that "physiologically tough" stowaways are present on deep-sea research instruments and to guard against transport of nonnative species--from or to The Deep.

Plan ahead for invaders, Douglas Adams might have suggested, but "don't panic."

At least not yet.