All Washed Up and Somewhere to Go

Seaweed on beaches is an ecological treasure trove 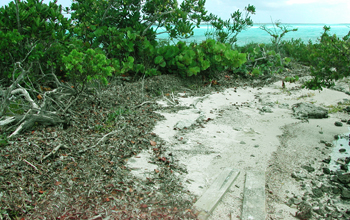 The "wrack line" on beaches: An ecological bridge between land and sea.

"Wrack," it's called--the tangled mass of seaweed found on beaches around the world. It washes in with the high tide and lingers long after the waters recede.

Beach-goers in summer barely notice it, other than to call it a nuisance. They step across piles of it to get to the water, finding the seaweed little but a hindrance.

They might want to take a second look, says ecologist David Spiller of the University of California, Davis (UC-Davis), currently on leave at the National Science Foundation (NSF) as a program director in the Division of Environmental Biology.

"Seaweed provides an important connection between two ecosystems," he says, "that of the sea and that of the land."

Ecologists generally studied habitats with the idea that what happens there stays there--or at least stays within certain boundaries. They assumed that most interactions occur within one habitat, rather than across two or more.

But that thinking has gone out to sea.

Spiller and colleagues conducted a study of the effects of "deposition events" on seaweed species inhabiting tropical islands in the Bahamas. In this case, the researchers looked at seaweed transported from one location to another by hurricanes and other major storms.

They added seaweed to six shoreline plots and removed seaweed from six other plots over a three-month period.  All plots were monitored for 12 months after the initial change.

Spiller found that washed-up seaweed is in fact a resource "subsidy" that's consumed by flies and small amphipods such as beach fleas, which in turn are eaten by lizards and predatory arthropods like spiders.

In subsidized plots, the density of lizards also increased rapidly, averaging 63 percent higher than in non-subsidized plots. In addition, lizards shifted their diets to marine-based prey.

When clumps of seaweed appeared on the scene, they attracted marine amphipods that reproduce rapidly. Lizards then went from land-based vegetation to seaweed to feast on the treasure trove.

The addition of seaweed also led to an increase in insect damage to plants living along the beach. When lizards moved to seaweed from land-based vegetation, their usual prey--plant-eating insects--were free to go on a spree, decimating plant leaves as they munched.

"What we saw may be called a 'fertilization effect' in which seaweed adds nutrients to plants, increasing their growth rate," says Spiller, "and a 'predator-diet-shift effect' in which lizards shift from eating land-based prey to consuming small, marine detritivores that breed in seaweed."

Spiller and colleagues published the results in the journal Ecology. Co-authors of the paper are Jonah Piovia-Scott, Amber Wright, Louie Yang and Thomas Schoener of UC-Davis, Gaku Takimoto of Toho University in Japan, and Tomoya Iwata of the University of Yamanashi in Japan.

In a follow-up study published in the journal Science, the biologists looked at the effect of another predator, ants, on plant-eating insects on the same islands. The ants chow down on the insects, giving plants a breather.

A combination of ants and lizards has a strong positive effect--on plants. But insects aren't as lucky.

Predatory ants on islands in the Bahamas are nocturnal; lizards go about their business by day. In a world with both ants and lizards, plant-eating insects are hit from both sides.

But when seaweed is added to the mix, the effect disappears. Like the lizards, the ants head for the beach to dine on small creatures breeding in shoreline seaweed.

Damage to land-based plants then increases as there are more of the plant-eating insects.

Seaweed wrack is likely to increase with more frequent storms as a result of global warming, as well as from increased nutrient run-off that fuels seaweed growth--and via a reduction in seaweed-eating fish caused by overfishing.

"We all need to take a closer look," says Spiller, "at that line of seaweed on the sand."