Acid Rain: Scourge of the Past or Trend of the Present? 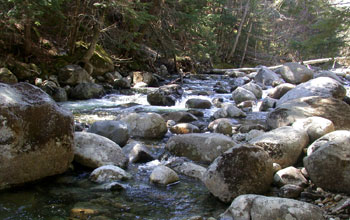 Has acid rain washed out of forests and streams? Or is a new threat on the way?

Acid rain. It was a problem that largely affected U.S. eastern states. It began in the 1950s when Midwest coal plants spewed sulfur dioxide and nitrogen oxides into the air, turning clouds--and rainfall--acidic.

As acid rain fell, it affected everything it touched, leaching calcium from soils and robbing plants of important nutrients. New England's sugar maples were among the trees left high and dry.

Acid rain also poisoned lakes in places like New York's Adirondack Mountains, turning them into a witches' brew of low pH waters that killed fish and brought numbers of fish-eating birds like loons to the brink.

Then in 1970, the U.S. Congress imposed acid emission regulations through the Clean Air Act, strengthened two decades later in 1990. By the 2000s, sulfate and nitrate in precipitation had decreased by some 40 percent.

Has acid rain now blown over? Or is there a new dark cloud on the horizon?

In findings recently published in the journal Water Resources Research, Charles Driscoll of Syracuse University and the National Science Foundation's (NSF) Hubbard Brook Long Term Ecological Research (LTER) site in New Hampshire reports that the reign of acid rain is far from over.

It's simply "shape-shifted" into a different form.

Hubbard Brook is one of 26 NSF LTER sites across the nation and around the world in ecosystems from deserts to coral reefs to coastal estuaries.

Co-authors of the paper are Afshin Pourmokhtarian of Syracuse University, John Campbell of the U.S. Forest Service in Durham, N.H., and Katharine Hayhoe of Texas Tech University. Pourmokhtarian is the lead author.

Acid rain was first identified in North America at Hubbard Brook in the mid-1960s, and later shown to result from long-range transport of sulfur dioxide and nitrogen oxides from power plants.

Researchers at Hubbard Brook have continued to study the effects of acid rain on forest growth and on soil and stream chemistry.

Long-term biogeochemical measurements, for example, have documented a decline in calcium levels in soils and plants over the past 40 years. Calcium is leaching from soils that nourish trees such as maples. The loss is primarily related to the effects of acid rain (and acid snow).

Now, Hubbard Brook LTER scientists have discovered that a combination of today's higher atmospheric carbon dioxide (CO2) level and its atmospheric fallout is altering the hydrology and water quality of forested watersheds--in much the same way as acid rain.

"It appears that these forests and streams are under threat again. Climate change will likely return them to an acidified state. The implications for these environments, and for humans depending on them, are severe."

Climate projections indicate that over the 21st century, average air temperature will increase at the Hubbard Brook site by 1.7 to 6.5 degrees Celsius, with increases in annual precipitation ranging from 4 to 32 centimeters above the average from 1970-2000.

Hubbard Brook scientists turned to a biogeochemical model known as PnET-BGC to look at the effects of changes in temperature, precipitation, solar radiation and atmospheric CO2 on major elements such as nitrogen in forests.

The model is used to evaluate the effects of climate change, atmospheric deposition and land disturbance on soil and surface waters in northern forest ecosystems.

It was created by linking the forest-soil-water model PnET-CN with a biogeochemical sub-model, enabling the incorporation of major elements like calcium, nitrogen, potassium and others.

The results show that under a scenario of future climate change, snowfall at Hubbard Brook will begin later in winter, snowmelt will happen earlier in spring, and soil and stream waters will become acidified, altering the quality of water draining from forested watersheds.

"The combination of all these factors makes it difficult to assess the effects of climate change on forest ecosystems," says Driscoll.

"The issue is especially challenging in small mountain watersheds because they're strongly influenced by local weather patterns."

The model was run for Watershed 6 at Hubbard Brook. "This area has one of the longest continuous records of meteorology, hydrology and biogeochemistry research in the U.S.," says Pourmokhtarian.

It may have more to weather in the decades ahead.

The model showed that in forest watersheds, the legacy of an accumulation of nitrogen, a result of acid rain, could have long-term effects on soil and on surface waters like streams.

Changes in climate may also alter the composition of forests, says Driscoll. "That might be very pronounced in places like Hubbard Brook. They're in a transition forest zone between northern hardwoods and coniferous red spruces and balsam firs."

The model is sensitive to climate that is changing now--and climate changes expected to occur in the future.

In scenarios that result in water stress, such as decreases in summer soil moisture due to shifts in hydrology, the end result is further acidification of soil and water.