A Tree Stands in the Sierra Nevada

A coniferous view of the link between snowmelt and water supplies in the U.S. West 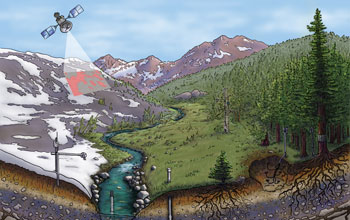 If trees could talk, what tales they might tell of the health of the forests, of the winter snows that fall on their branches and of how much water they transpire to the atmosphere.

Now, one tree may be poised to do just that, or at least to offer new insights into a place called the critical zone: The region where rock meets life between the top of the forest canopy and the base of weathered rock.

The Critical Zone Tree, this white fir is called. It's a scientific totem pole that stands tall in the forest of the Southern Sierra Critical Zone Observatory (CZO).

The Southern Sierra CZO is one of six such observatories supported by the National Science Foundation (NSF). Scientists there recently found that winter snow from Sierra blizzards foretells how much water will be at the base of the mountains during the summer.

This is important for people downstream who toil in California's multi billion-dollar agricultural industry and depend on water from Sierra snowmelt. That water is the source of more than 60 percent of California's supply.

In addition, without torrents of melting snow cascading across hillsides, wildflowers won't bloom, and the birds and bees that need the flowers' nectar can't thrive.

But more and more, the rivers are running dry, running late or running early.

"NSF's CZOs are providing scientists with new knowledge of the critical zone and its response to climate and land-use change," says Enriqueta Barrera, program director in NSF's Division of Earth Sciences, which funds the network of six CZOs.

"They're the first systems-based observatories dedicated to understanding how Earth's surface processes are coupled," says Barrera. "The results will help us predict how the critical zone will affect the ecosystem services on which society depends."

The water cycle, the breakdown of rocks and eventual formation of soil, the evolution of rivers and valleys, patterns of plant growth, and landforms we see all result from processes that take place in the critical zone.

"The CZOs are fostering an investigation of the critical zone as a holistic system," says Barrera.

NSF's CZOs are located in watersheds in the southern Sierra Nevada, Boulder Creek in the Colorado Rockies, Susquehanna Shale Hills in Pennsylvania, Christina River Basin on the border of Delaware and Pennsylvania, Luquillo riparian zone in Puerto Rico, and the Jemez River and Santa Catalina Mountains in New Mexico and Arizona.

At the Southern Sierra CZO, "we investigate how the water cycle drives critical zone processes," says lead scientist Roger Bales of the University of California, Merced. "Research focuses on water balance, nutrient cycling and weathering across the rain-snow transition line."

Society has long recognized the importance of water, soil, landforms and rivers to human welfare, says Bales, "but has only recently begun to look at their workings as a coupled system."

Water, vegetation and geochemistry are all interrelated, Bales and other scientists have found, with feedback from each influencing the others. But, how are they interrelated?

Enter the Critical Zone Tree--or trees. "In actuality," says Bales, "there are several of them."

The white fir and its coniferous relatives observe Sierra forests from the headwaters of the Providence Creek Basin. The trees and forest floor around them are covered with instruments that measure soil moisture, temperature, snow depth, solar radiation, sap flow and snowmelt patterns.

Beneath them are crisscrossing streams that course through a series of meadows. These rivers and creeks fan out across the mountains, carrying water across hill and dale--water that eventually sustains California's food-producing Central Valley.

The Critical Zone Trees play a starring role in the Southern Sierra CZO story. They've become frontrunners for a series of wireless sensors that dot the forest like wildflowers in spring, transforming our understanding of the mountain water cycle.

The network of sensors tracks snowpack depth, water storage in soil, and stream flow and water use by vegetation--information that's important for the wise use of water in the arid mountain west.

"This type of wireless sensor network will revolutionize the way we understand our most important source of water in California--and far beyond," says Bales.

Natural resource managers often lack accurate estimates of precipitation, and of the loss of water from the soil from direct evaporation and by transpiration from the surfaces of plants in the mountains. Therefore, they struggle to know how much water to retain in reservoirs, how much to release--and when.

In a future that holds even more uncertainty, the Southern Sierra CZO wireless sensor network will provide water officials with a way to better predict snowmelt runoff.

"This observation system is our window into the future of water availability in the southern Sierras," says Jun Abrajano, NSF acting deputy assistant director for Geosciences.

Climate warming means that more rain and less snow will fall in the Sierras and plant growth will change accordingly.  How long will we be able to rely on the Sierra snowpack as a "water tower"?

"An understanding of 'water balance,' made possible by the CZO, is what's needed to predict how whole-scale changes in vegetation cover will affect the future amount and timing of water availability in this region," says Abrajano.

Scientists at the Southern Sierra CZO are finding answers by teasing apart the interconnected strands of critical zone processes. They're asking questions such as: How do variations in landscapes affect the way soil moisture, water use by vegetation, and stream flow respond to snowmelt and rainfall?

Bales and colleagues have found that small temperature differences between rain- and snow-dominated Sierra watersheds result in significantly different timing of runoff in the region's coniferous forests.

For every 1 degree Celsius increase in long-term average temperature, the scientists believe, runoff will happen seven to 10 days earlier in some locations.

"We've also found that across a broad range of elevations, forests transpire water year-round," says Bales, "with much higher water use than previously predicted."

The results highlight a new link between climate and the deeper subsurface beneath trees.

Getting to the root of water availability, it turns out, may fall in the domain of not one Critical Zone Tree, but across--and under--a whole forest of them.